Lithium, the key material of electric car batteries, has hit a new record high price due to tight supply.

Earlier this year, billionaire Elon Musk complained that lithium – the ubiquitous raw material needed for electric vehicle batteries – was trading at a frenzy, like “a license to print money”. Soon after, Chinese authorities in March spurred key players in the industry to take action, causing prices to briefly start cooling down. However, the price of this item is currently increasing again, creating more pressure on electric car manufacturers.

The price of lithium carbonate hit a record level of 500,500 yuan a tonne (US$71,315) in China on September 16, according to data from Asian Metal Inc. The price of this item increased by more than 80% from the beginning of the year and nearly 230% over the same period last year, pushing up the production cost of electric vehicle batteries.

That risks prolonging the supply squeeze, reducing profits for battery makers and carmakers and forcing some suppliers to raise prices. Earlier this month, a battery production unit of China’s top lithium supplier, Ganfeng Lithium Co. – which supplies small-sized lithium polymer batteries for smart wearables and batteries for Bluetooth headsets from companies like Xiaomi – said it is re-evaluating the prices of its orders as battery costs have risen significantly.

The Shanghai-based electric vehicle maker’s chief financial officer Steven Feng has told investors that higher battery costs have dented vehicle margins in the second quarter and uncertainty. on price looks likely to continue into the future. 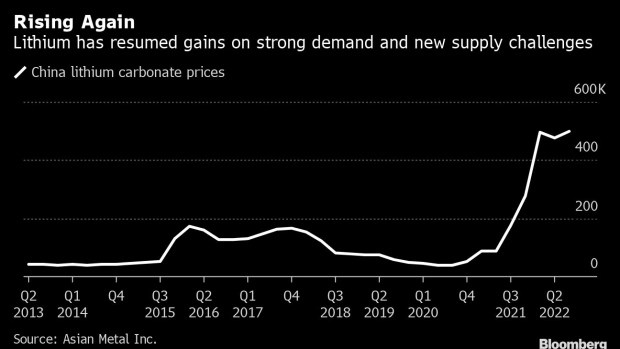 In the coming months, the production of lithium-ion batteries and battery materials may be affected by electricity shortages in China in the coming winter. Power shortages in August in Sichuan province – which supplies more than a fifth of China’s lithium output – led to two weeks of power cuts, severely affecting supply in an already tight market.

As such, the supply is expected to decrease while the demand for vehicles increases. The China Automobile Association has raised its forecast for electric car sales to a record 6 million units this year, more than double 2021. Demand for batteries in the country is also forecast to nearly double. . At the same time, commodity manufacturers are struggling to bring new projects online and secure financing for approvals for future developments.

“A lot of OEMs and battery makers have been disappointed in prices in the lithium sector over the past few months,” said Gilberto Antoniazzi, chief financial officer of materials company Livent at a conference in September.

According to China’s Ministry of Industry and Information Technology (MIIT), new concerns about supply and the price outlook have prompted Chinese authorities to convene leading companies in lithium mining, oil refineries, and refineries. and other industry groups joined the meeting to stabilize prices.

Authorities have advised lithium manufacturers not to collude on prices and not quote prices that differ significantly from the cost of production. The MIIT said the government will take measures to encourage lithium ore exploration, maintain stable lithium imports and promote lithium recycling.

Unlike the March intervention, which at least halted a rise in lithium, authorities may not be able to make an impact this time “unless specific price controls more applied,” said Daiwa Capital Markets.

READ MORE:  How much % of salary do people around the world have to spend to buy iPhone 14?

Global suppliers also forecast the lithium rally to continue, suggesting the raw material is a long-term headache for the electric vehicle industry.

On September 15, Soc. Quimica & Minera de Chile SA (SQM), the world’s second largest producer of lithium, forecasts that the market will be very scarce in the coming years. SQM notes that prices this quarter are likely to be slightly higher than three months earlier and remain high through the end of the year.

Chris Ellison, chief executive officer of Mineral Resources Ltd., a supplier of lithium to projects in Australia, told investors last month that “We’re in short supply at the moment. and it looks like it will continue to do so until at least 2030.”

As the auto industry begins to shift towards making only electric vehicles, spurred on by more fossil fuel vehicle bans set to roll out over the next decade or so, the pressure on environmentally responsible battery production increases. school and society will increase. And accordingly, the lithium market will face many great fluctuations in the future.