What are the key challenges of Vietnam’s economic growth this year?

Vietnam was an economic star in 2020, as it managed to control the COVID-19 pandemic while maintaining one of the highest growth rates in the world. While GDP growth was only about 3 per cent, about half of its normal 6–7 per cent growth rate, most countries faced falling levels of output.

But the government — perhaps confident that its test, track and quarantine measures could continue to control the virus — was slow in procuring vaccines. When the Delta variant proved to be more transmissible and not so easily managed, there was a scramble to procure vaccines. This effort became more important after Omicron emerged.

Related: Vietnam is expected to become a new production hub of the world

As a result, 2021 was a tough year as shutdowns made life difficult and GDP slowed to 2.6 per cent. Increasing supplies of vaccines eventually allowed more normal activity in the last few months of 2021. Vietnam’s GDP shrank 6 per cent in the third quarter before bouncing back in the fourth quarter.

The trade surplus, a source of past tension with the United States, halved in 2021 to a modest US$4 billion. The nominal exchange rate of the Vietnamese dong against the US dollar modestly appreciated and foreign exchange reserves grew to four months of imports. Inflation was less than 2 per cent.

The big question now is if these developments will tarnish Vietnam’s hard-won reputation as a reliable supplier and alternative to China for manufactured exports ? Despite factory closures, exports rose 19 per cent in 2021 to an astonishing US$336 billion — while GDP was only US$271 billion in 2020 and grew only slightly in 2021. The high level of foreign direct investment (FDI) did not grow nor shrink much. The rapid increase in vaccinations — about 60 per cent fully vaccinated by early 2022 — suggests that factory closures will be modest in 2022. 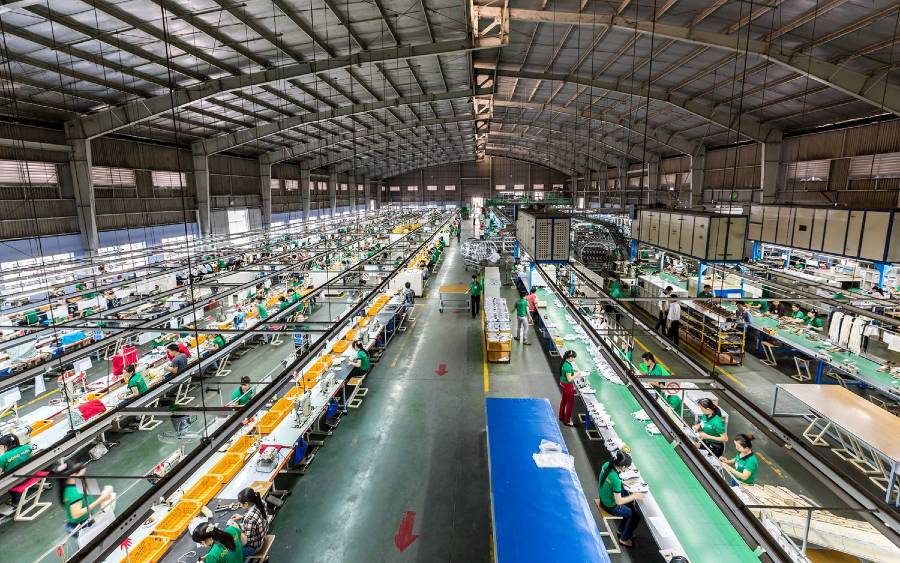 But labour shortages may be more of a problem, as workers fear another round of factory closures and travel restrictions. There were troubles hiring even in 2019 as labour force growth slowed. Global pressures to reduce risk and increase resilience in supply chains are another headwind. While the momentum of past FDI commitments will keep export growth high in 2022, there are questions about later years.

One side effect of Vietnam’s rapid export growth has been a lag in domestic value-added in exports. Much of the work has been simple assembly rather than the development of a dense network of supplier industries that would make the FDI ‘stickier’ as wages rise and labour supplies tighten. The progress in this area has come from FDI suppliers following their ‘mother’ firms, not locally owned firms.

The COVID-19 pandemic slowed progress on this front, as fewer new enterprises opened and many more temporarily closed. Many firms that are still in business are financially weaker and will need time to accumulate resources to improve machinery, training and marketing. On the other hand, domestic firms managed to increase investment by 7 per cent in nominal terms while government and FDI firms saw declines. This is surprising given the 1.2 per cent real growth in service activity and 4 per cent real growth in the industry.

Prospects for 2022 are good. As factories and services approach normal, there will be a jump in output, much as China had in early 2021. Most projections are for 6–7 per cent real GDP growth. Tourism should start to recover from its over 95 per cent decline from 2019 levels. Exports should grow about 15 per cent and the trade balance will remain modestly positive. Inflation will remain low and the dong will continue to appreciate slightly against the US dollar. This projection assumes that China’s border closures will ease, allowing more normal trade flows than in 2021.

While economic relations with the United States have improved, the continuing crackdown on independent journalists and online commentary may create tensions. This could influence future FDI flows and push Vietnam to diversify from its reliance on simple assembly FDI — a trend caused by labour shortages and rising wages. It could also limit the inflow of high-tech FDI that would allow Vietnam to transform its economy into ‘Industry 4.0’ and improve productivity.

Also read: How to setup a foreign invested enterprise in Vietnam

The quality of FDI will have to be a focus, along with more efforts to upgrade education and training.  Reliance on larger and well-connected domestic firms will likely increase, with uncertain results. While management at the top is dynamic, there is the risk of taking on more than can be easily digested. Vulnerability to cyber-attacks is another pressing issue.

Another issue is the continuing amendment of PDP-8, the new plan for expanding electricity production. It has changed from a balanced approach with more renewable energy to one heavily favouring coal. Plans to increase transmission have been scaled back and this will hurt any FDI in green energy — indeed, solar energy growth has been capped in 2022. This change is not consistent with Vietnam’s COP26 declarations.

Vietnam’s GDP per capita in PPP terms exceeded US$11,000 per capita in 2021. This is a huge gain from 2000 but still leaves it poorer than most of the larger ASEAN economies and facing important environmental problems in the Mekong Delta and cities. Rising wages relative to productivity, pressures to reshore exports and falling tech ratings for its workers pose medium-term challenges for Vietnam.

David Dapice is a Senior Economist in the Ash Center for Democratic Governance and Innovation at the John F Kennedy School of Government, Harvard University. This article was first posted here.