“VinFast will conquer the caution of Europeans”

After a special trip to experience Vietnamese culture, observe firsthand the operation of VinFast car factory and Vingroup ecosystem recently, writers and automotive experts from Europe believe that the Vietnamese automaker owns “the competitive advantage of leading models that are favored by European customers.”

High-end model, can beat the competition

Ruben Jason Penders, a famous car writer in the Netherlands, has just had an impressive trip. It is exploring the production complex of the only electric car brand in Southeast Asia – VinFast and directly driving one of the two electric SUV models that are “storming” around the world with 65,000 orders only after 6 months on sale – VF 8.

The first impression of a Dutch car writer when he saw the VF 8 model on Hon Tre island (Nha Trang, Khanh Hoa) was “a very European look”. Penders believes that VinFast was right when shaking hands with the “design wizard” Pininfarina – a guarantee for users who adore the perfect beauty on car models.

In the eyes of Penders, the interior of the VF 8 is very modern and has many similarities with the Tesla Model 3.

“I also like how VinFast integrates the information displayed in the central screen with large size to reduce physical buttons, creating convenience for users. These are all plus points of the VF 8”, Penders emphasized.

The experience of sitting in the driver’s seat of the VF 8 also makes Penders particularly satisfied. The car accelerates very quickly but still brings comfort to the driver. For a guest from Europe, the VF 8’s operating range and charging speed are also nothing to criticize.

“The VF 8 is on par with the leading electric models coming to the market,” Penders assessed.

Also, one of the first people to experience the VF 8 model right in Vietnam, Alessio Viola, a reporter for the long-standing automotive magazine Quattroruote (Italy), did not regret the compliment. The writer from the hometown of designer Pininfarina is confident that VinFast’s SUV has a balanced beauty and can beat competitors. 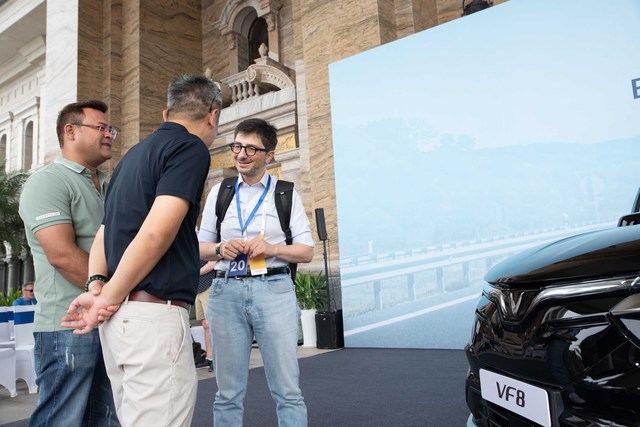 Journalist and automotive expert Alessio Viola (first from right) is particularly impressed by the groundbreaking vision of Vingroup and VinFast.

According to Viola, the design of the VF 8 has many similarities with Tesla’s electric models such as being equipped with a large central screen. Most impressive is the compactness and outstanding sound insulation of the car.

“The VF 8 is even more compact than many European cars I’ve driven. At 100km/h, sitting in the car can barely hear the wind. These are the competitive advantages of the top models loved by European customers”, the European guest confirmed.

Coming from a hexagonal country, Eric Dupin, an electric vehicle expert of Automobile Propre magazine (France), revealed that he has “notice” the VF 8 model since the re-launch of the Los Angeles Auto Show 2021 in the US. According to Dupin, VF 8 possesses delicate lines, bearing the unmistakable mark of Italian designers. 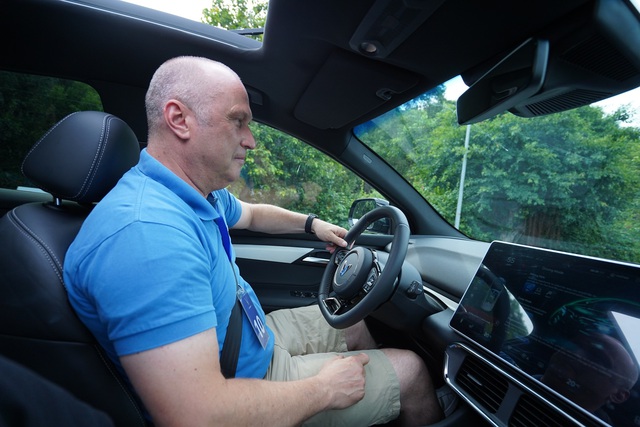 VF 8 scores many plus points in both design and operation with European media.

After directly driving the VF 8 on the test track in Nha Trang, even though it was only the first time, Dupin thought that he was right about the Vietnamese electric car model.

READ MORE:  Here’s one of World’s Top Family Resorts in Vietnam you should know

“The driving experience is excellent. The engine is smooth, the car is smooth, the brakes are strong. There is no doubt that the VF 8 is truly a premium model and will convince European customers”, French reporters believe.

In-depth analysis of VinFast’s strengths and prospects in Europe, market-savvy writers all consider VinFast’s opportunity to be huge. 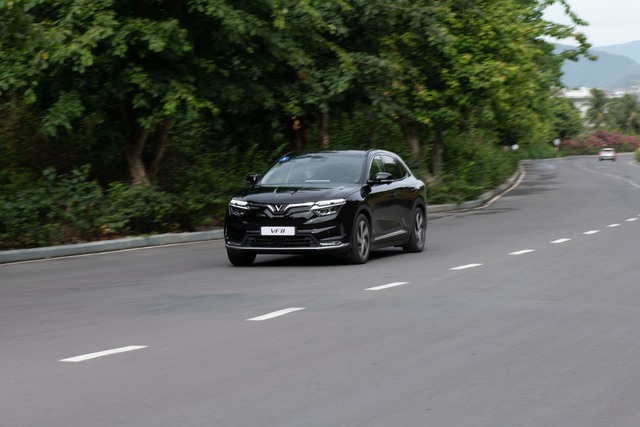 VinFast is the pioneer brand to realize Vingroup’s global vision.

Eric Dupin of Automobile Propre pointed out that VinFast has four advantages: a solid fulcrum, a clear strategy, outstanding speed and a different marketing strategy. In particular, the key point is VinFast’s quick steps to realize its business plan in Europe, such as the preparation for the opening of VinFast Stores, where customers can come to directly experience car models.

“With the typical European customer being cautious, this will give them confidence and peace of mind,” explains Mr. Dupin.

The seriousness and methodicality is also what the expert from Italy, Alessio Viola, noticed in the way of VinFast. Viola said that with the plan to build a production plant right in Europe, the Vietnamese car company has really joined the “playground” of electric vehicles in this market, just like how Tesla did when it invested in a large-scale production center in Germany. The fulcrum of Vingroup and its breakthrough speed and vision contribute to the competitive strength of VinFast.

Commenting on the ability to go on the road, from Dupin’s point of view, VinFast is not quite a startup. Despite being a rookie in the automotive industry, behind VinFast is the “giant” Vingroup.

This is also the unique strength of VinFast, according to Dutch journalist Ruben Jason Penders. Unlike many electric car companies in China who are merely small-scale technology startups, VinFast can be considered a big “power” thanks to the strong backing of Vingroup. Moreover, by coming before manufacturers from China, VinFast is in the upper hand, especially when the Netherlands does not have its own electric car company.

“Especially, when customers know what Vingroup and VinFast have done in Vietnam, combined with reasonable car prices, this brand has won,” Penders believes.