VinFast plans to IPO in the US in January 2023

According to Bloomberg, the electric vehicle maker VinFast of Vingroup is likely to offer an initial public offering (IPO) in the US in January 2023 at the earliest and raise at least 1 billion USD, or possibly more, depending on the interest rate.

Discussions are ongoing and the details of the IPO, including the timeline, are still subject to change. Meanwhile, representatives of VinFast declined to comment.

According to a source on Bloomberg, VinFast has held talks with potential investors and will consider factors, including market conditions, to determine the right IPO time.

VinFast Trading & Investment Pte.Ltd., a Singapore-based subsidiary of Vingroup, has filed for a public offering (IPO) to the US Securities and Exchange Commission (SEC) since April 2022, after VinFast announced its plan to spend 4 billion USD to build the first factory complex in the US. 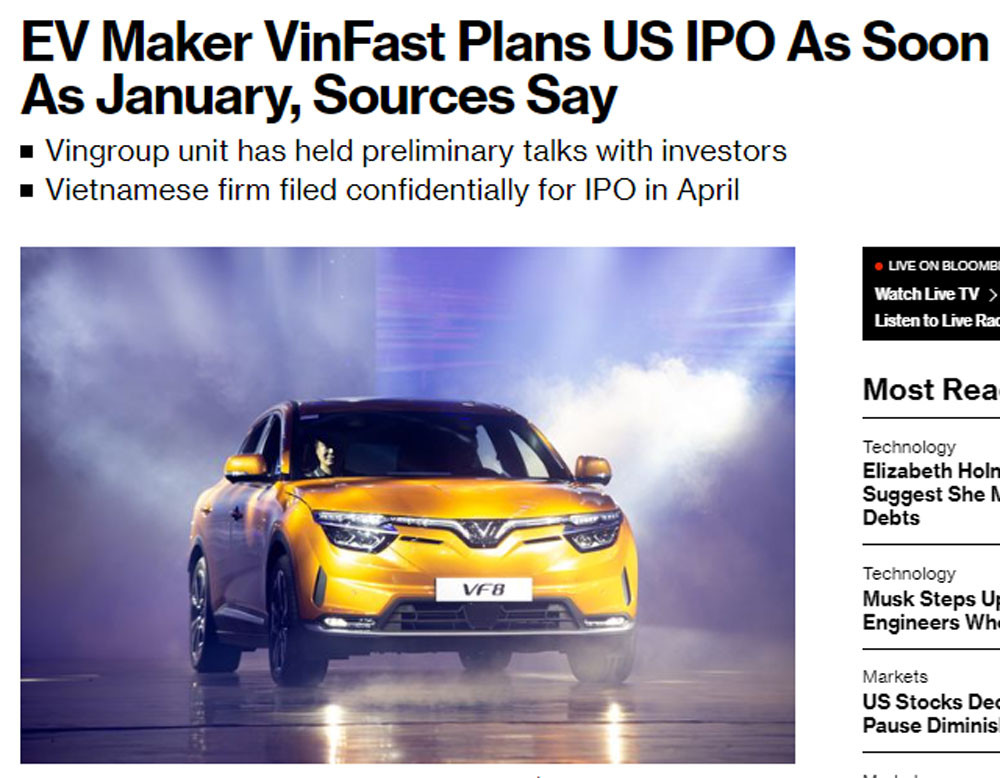 VinFast may IPO in the US as early as January 2023. (Source: Bloomberg)

In September, Chief Financial Officer David Mansfield said that VinFast is considering an IPO at “some time in 2023”.

VinFast has secured about 1.2 billion USD for an electric car factory in North Carolina, expected to go into production in 2024. Last month, VinFast agreed to expand cooperation with Chinese battery maker Contemporary Amperex Technology Co. Ltd. in the field of chassis.

In July, VinFast said it had signed agreements with banks to raise at least 4 billion USD to help expand operations in the US. There have been about 73,000 global orders for electric vehicle products.

Pham Nhat Vuong, Chairman of Vingroup, whose asset value increased sharply from 3.8 billion USD on November 11 to 4.7 billion USD on the morning of November 17, ranked 576th in the world thanks to the increase in VIC shares.

READ MORE:  How dangerous is new Covid strain, and could it hamper a vaccine?

Previously, Mr. Pham Nhat Vuong was expected to soon be in the top 40 richest people in the world if the VinFast IPO and listing in the US was successful.

It is estimated that if VinFast IPO is successful in the US with a valuation of 60 billion USD as expected, Mr. Vuong will have about 26 billion USD more. At that time, Mr. Vuong’s total assets will be over 30 billion USD.