The cultural richness of Vietnam stands out with a wide range of traditional festivals. By participating in these vibrant activities, one has a golden opportunity to understand the myths and customs of Vietnam.

Many cultural events and festivals on both national and local scale are held at certain times of the year. So, if you are overwhelmed in deciding which festival you want to attend, the list of the most famous festivals in Vietnam plus helpful travel tips compiled below is very valuable.

Tet Day, officially known as Lunar New Year is undoubtedly the biggest festival of the year to reunite families and practice traditional rituals. The celebration period falls on the first night of the new moon in the first month of the lunar calendar, usually from the last week of January to the third week of February according to the Gregorian calendar.

Normally public holidays will be off for seven days. During that time, a number of special customs are conducted including cleaning and decorating the house, buying salt at the beginning of the year, giving lucky money to children and the elderly, holding family parties, wishing Tet and visiting pagoda. Essentially a religious celebration, you shouldn’t expect a wild but intimate party.

Intending to start the journey to celebrate Tet, everyone must keep in mind some important information.

All shops and shops are closed normally until the 3rd of Tet. So you need to double check before shopping or visiting anywhere. Next, book flight tickets, hotels and services to hot attractions at least a few months before Tet to avoid overcrowding.

Last but not least, be careful in haggling at the beginning of the year as vendors believe that overtrading will harm their business. So you better ask for less discount than usual.

Unlike other traditional festivals, New Year is an international celebration that marks the transition between the old year and the coming year in the Gregorian calendar. Thanks to the widespread official adoption of the solar calendar, this period is considered the most important festival in Vietnam after the Lunar New Year.

Like other countries, in Vietnam, a series of boisterous street performances and vibrant activities such as large fireworks displays, music shows and countdown shows are held to celebrate the the most important time of the year. The atmosphere is most vibrant in major cities and famous attractions nationwide such as Hoan Kiem Lake, Hanoi and District 1, Ho Chi Minh City.

It’s best to immerse yourself in the festive atmosphere at event venues or at bars and nightlife venues to sip great cocktails while waiting for New Year’s Eve. However, visitors also need to pay attention to personal belongings, avoid crowds.

The full moon of January, also known as the Mid-Autumn Festival or the Mid-Autumn Festival in Vietnamese, is celebrated on the 14th and 15th of the 8th lunar month. This is an important harvest festival celebrated not only in Vietnam but also in other wet rice growing countries in Asia such as China, Taiwan, Hong Kong, Japan and Korea. Considered a second occasion for family reunions besides Tet, the Full Moon Festival offers free time for family members to return home, organize and participate in a variety of activities such as children carrying paper lanterns. , lion dance, set up an altar in the night. of the festival, and food stalls selling moon cakes, sticky rice, fruits, and candies lasted the previous month.

READ MORE:  5 famous people in the world born in the year of the Dragon

In fact, there aren’t any important customs you have to follow but you should find great places to visit during this time. The Mid-Autumn Festival in Hoi An is best enjoyed by strolling and admiring the colorful paper lanterns floating on the banks of the Thu Bong River. If you are in Hanoi, you should go to Thang Long Imperial Citadel, My Dinh National Stadium and West Lake or Hoan Kiem Lake to enjoy the joyful, safe and peaceful festive atmosphere.

Festival in memory of Hung King

The annual Hung Temple Festival is organized by Phu Tho province to commemorate King Duong Vuong – the first king of Vietnam. The event includes various rituals and entertainment activities from the 6th to the 10th day of the 3rd lunar month.

The main worshiping event takes place at Hung Temple on the top of Nghia Linh mountain to show respect to the Hung Kings, marking the death date of Father Lac Long Quan and Mother Au Co. Next is the flower offering ceremony at Thuong Temple (Thuong Temple) where the Hung Kings used to worship gods during their reign. Various folk singing activities and exhibitions, baking contests, sports tournaments and folk games will also be held to promote local culture. Tourists are welcome at the night market and pedestrian street in the pedestrian zone for entertainment during the celebration.

To have the most enjoyable and comfortable moments in this outstanding festival, you should prepare yourself the following: 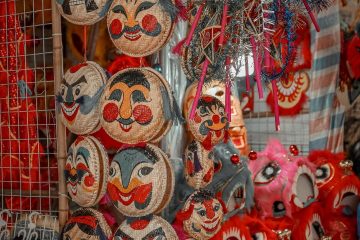