Nikkei Asia reports, a number of recent studies indicate that, in the context of persistent inflation and the labor crisis, workers in Asia are likely to receive more wage increases in 2023, including Vietnam.

From India to Vietnam, in order to retain talents, employers are forced to raise wages. Not only that, after the cost of living rose sharply in Asia this year, the increase in wages is seen as a response to inflation forecasts in 2023, while bringing hope of real income growth for workers in this area.

According to a study by Aon (USA) on wages and unemployment rates in Southeast Asia, by 2023, the average wage increase budget across industries is forecast at 6.8% for Indonesia, 5.1% for Malaysia, 6% for the Philippines, 4.7% for Singapore, 5.1% for Thailand and 7.9% for Vietnam. 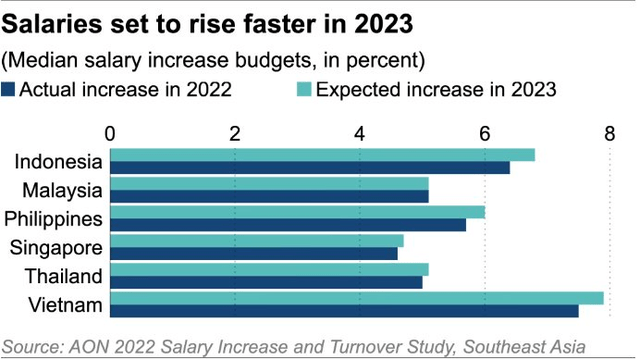 The budget for wage increase in Vietnam in 2023 is forecast to be higher than that of other countries in the region. Source: Nikkei Asia

The study emphasizes that, although inflation plays an important role in driving wage changes in ASEAN, the shortage of high-quality human resources has also influenced the decision to increase wages of businesses.

“Companies must determine how to increase wages in 2023 given the competitive nature of their current salaries,” said Rahul Chawla, Head of Human Resource Solutions, Southeast Asia, Aon. While it is important for businesses to determine and adjust wages for each worker based on the nature of the job, companies need to react quickly when reviewing their pay principles”.

Not only Aon, the salary survey results of consulting firm Mercer released last month also show signs of wage growth across the Asia-Pacific region in the coming year. Specifically, companies forecast wages to increase by an average of 4.8% in 2023.

READ MORE:  Smuggling of sugar to Vietnam from Laos and Cambodia on the rise

The survey results also show that in most cases, expected wage growth in the region will be higher than the projected inflation rate in 2023. For example, 2023 inflation in India is forecast 5.1%, Japan 1.4% and China 2.2%.

While some workers are concerned about escalating costs, some may be looking for more. In the Robert Walters Recruiting Company Global Salary Survey, “job hopping” workers typically expect a pay increase of 15% to 20% and up to 40% of them are tech-savvy.

In Singapore, the report shows that 80% of employees are likely to ask for a raise. Of which, more than 78% of workers polled are willing to consider changing jobs next year if their salary increase is below the rate of inflation, 71% expect employers to consider rising costs of living when assessing salary increases or bonuses over the next 12 months.

However, wages may not be the only issue.

“For many candidates, money is no longer the only factor when making job-related decisions. We have found that employees are forced to look for other opportunities when feeling exhausted, or bored because they are not reaping new knowledge and experiences”, said Monty Sujanani, Country Manager of Robert Walters Singapore identify.