The most searched NFT project around the world is the Vietnamese game Axie Infinity.

Seen as a digital age investment channel, there has been an explosion of interest in NFT (non-fungible token) in recent months with the number of NFT searches globally averaging 5.1 million per month, increased nearly 5 times compared to the end of 2021.

In particular, the game developed by the Vietnamese community – Axie Infinity is currently the most sought-after project in the past month with 3.86 million searches on Google (according to Design Bundles). 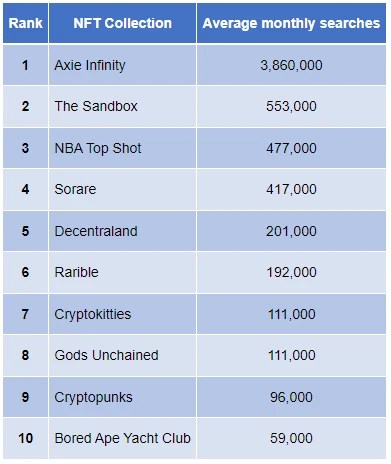 Specifically, the number of searches for Axie Infinity is 6 times higher than that of the NFT project, followed by The Sandbox (553,000 times), NBA Top Shot in 3rd place with 477,000 hits. This result is remarkable because even the famous NFT collection like CryptoPunks has only modestly dropped to the 9th rank.

According to statistics of Axie Infinity Marketplace, in just the last 24 days, up to 28,400 NFT Axies were successfully traded. The total value of transactions in a single day of Axies alone reached 1.5 million USD.

The culmination is that just a few days ago, Axie Infinity became the first project to reach a total transaction value of more than 4 billion USD from the NFT array. This is a record number when CryptoPunks with super expensive NFT avatars has just reached the highest mark of more than 2 billion USD. 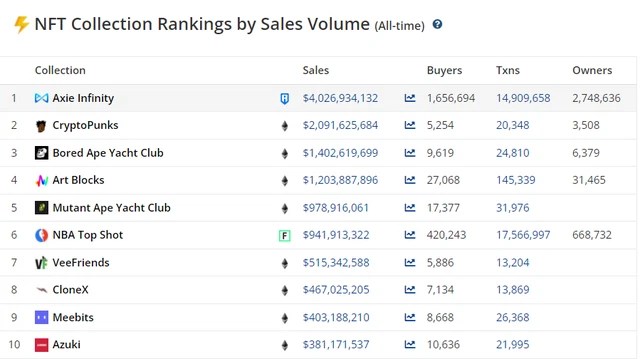 The GameFi model that Axie Infinity developed makes NFTs an important and indispensable resource for the project’s gamers. To enter the world of Axie Infinity, players must own at least 3 Axies (game characters), which are digitized in the form of NFTs and stored on the Ethereum blockchain.

As such, the strength that Axie Infinity has now is the play-to-earn model. This will continue to attract more players and drive NFT transaction values ​​up.

Launched in the market in 2018, Axie Infinity was developed by Sky Mavis – a startup with 9X Vietnamese CEO Nguyen Thanh Trung. The total capitalization of Axie Infinity’s AXS coin is currently estimated at $2.8 billion, ranking 3rd in the NFT segment and 44th in market capitalization compared to blockchain projects globally. 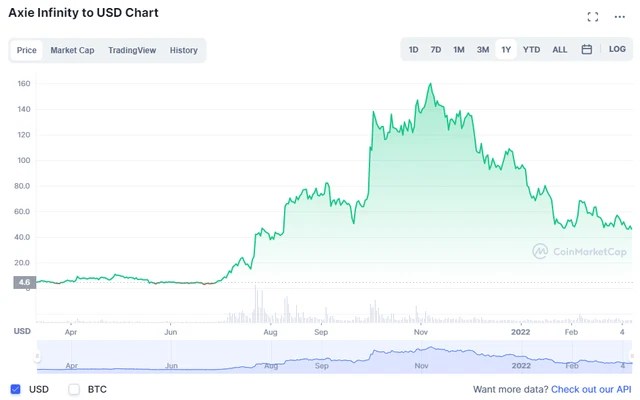 Previously, Thanh Trung and his associates built a blockchain platform called Ronin, which is considered a turning point for the NFT game market.

By the end of 2021, Sky Mavis – the developer of Axie Infinity has raised USD 152 million from investors with a valuation of about USD 3 billion.