A majority of expats in Vietnam are satisfied with the official communication on Covid-19, a survey by the world’s largest expat community, InterNations, has found.

As against 66 percent globally, 79 percent of expats in Vietnam said they are satisfied with the official information they receive about Covid and the protocol to prevent its spread.

To stay up to date, most surveyed respondents said, they follow news sources from forums and sites run and contributed by expats, the international media (45 percent), social media (43 percent), and official government channels (39 percent),

Close to one in three expats in Vietnam have decided not to move back home in the near future due to the pandemic versus 18 percent globally.

For its annual Expat Insider survey, InterNations asked 12,420 expats of 174 nationalities and living in 59 countries and territories about various aspects of life.

They were asked to rate 37 aspects of life abroad on a scale of one to seven.

Of the 59 places where expats are most and least satisfied with the official Covid-19 communication, Vietnam was 12th.

New Zealand, Taiwan and Qatar were first, second and third while Indonesia, Egypt and Brazil brought up the rear. 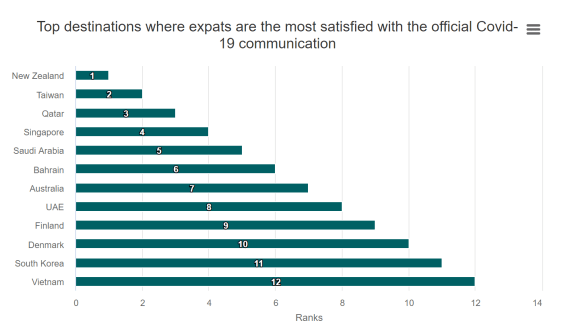 In Vietnam the latest Covid wave has infected 1,425 people in 28 cities and provinces since April 27.

Since the pandemic first broke out, the nation of 95 million has had 4,464 patients.

As of July 2019, according to official data, 91,200 foreigners from more than 100 nations and territories lived in Vietnam.