While negotiating with foreign vaccine providers, Vietnam will accelerate vaccine purchases to ensure that all people have access to Covid-19 vaccines.

The Politburo and the Secretariat of the Communist Party of Vietnam (CPV) have approved the proposal of the Ministry of Heath’s Party Committee Party Civil Affairs Committee on buying Covid-19 vaccines.

Accordingly, relevant agencies are responsible for organizing the purchase and use of Covid-19 vaccine while promoting the research and production of vaccines in the country.

Under agreement between the Ministry of Health and the COVAX Facility, COVAX will supply 30 million doses of vaccine for Vietnam in 2021, mainly in the second half of the year.

COVAX will buy vaccines from a number of companies and provide them to people in 90 countries. Vietnam will be among the first to get the vaccines.

UK company AstraZeneca has also committed to delivering 30 million doses to Vietnam this year. AstraZeneca’s vaccine was the first licensed for conditional import by the Vietnamese Ministry of Health.

The first 204,000 doses of AstraZeneca vaccine are expected to be available in Vietnam on February 28.

In 2021, Vietnam will have at least 60 million imported doses of vaccine. The Ministry of Health is negotiating with other companies such as Pfizer and Moderna, and Russia to have more vaccines.

Deputy Minister of Health Tran Van Thuan told VietNamNet that the fund for buying COVAX’s vaccines will come from many sources, mainly from the State budget, both centrally and locally. There are also other legitimate sources, including the support of benefactors and businesses.

“The purchase of vaccines must comply with the law and the plan approved by the Government. The Ministry of Health is only a specialized agency. Two days ago, we submitted to the Government the plan to buy vaccines,” Deputy Minister Thuan said.

READ MORE:  The development capacity of Vietnam’s tourism is the highest in the world

Local governments that want to buy vaccines for their people must also go through the Ministry of Health to submit to the Government for approval, so vaccines will be regulated to ensure fairness.

In urgent conditions, the Ministry of Health will minimize administrative services and implement rapid licensing within five days only.

For 30 million vaccine doses from AstraZeneca, the firm chose VNVX as its distributor in Vietnam. VNVX has a nationwide vaccination system and has allowed people to place orders for Covid-19 vaccines.

Deputy Minister Thuan said the fund for buying 30 million vaccine doses from AstraZeneca is covered by VNVX, but VNVX has to follow the plan of the Ministry of Health to ensure the vaccination program is implemented fairly and effectively.

Currently, the price of AstraZeneca vaccine in Europe is $2.16/dose. The price in Vietnam has not been announced, but a VietNamNet source revealed that the price per dose is about VND200,000 (about $9).

Who will be vaccinated first? 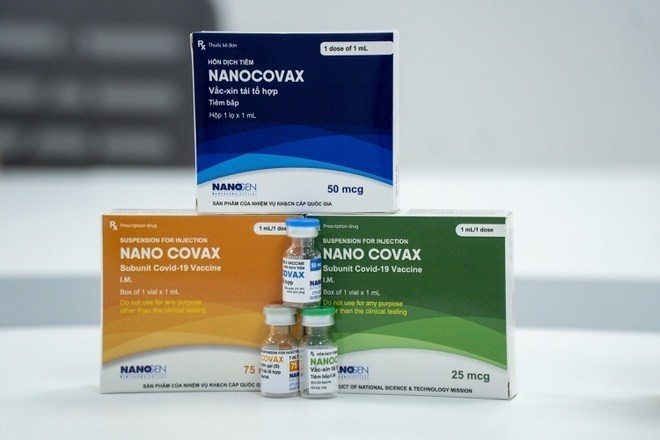 Vaccine Nanocovax has completed the first phase of clinical trial.

After the vaccine arrives in Vietnam, the Ministry of Health will submit to the Government for approval the vaccination plan, based on the World Health Organization (WHO) recommendations and relevant legal regulations on infectious disease prevention. Priority will be givent to epidemic-hit and high-risk areas, front-line people in fighting the epidemic such as health workers, soldiers, and police officers who work at quarantine zones.

For the vaccines provided by COVAX, the WHO has set a priority for vaccination: frontline health workers, followed by vulnerable groups such as the elderly with underlying conditions.

The WHO Vietnam Office is assisting the Ministry of Health to develop a national Covid-19 vaccination plan to send to COVAX.

Vietnam to produce own vaccine by end of 2021

Deputy Minister Thuan said that in parallel with purchasing foreign vaccines, Vietnam is accelerating research and production of vaccines in the country at Nanogen, IVAC and Vabiotech.

Nanogen has completed the first phase of the clinical trial for Nanocovax vaccine, and is expected to start the second phase trial at the Military Medical Academy and the HCM City Pasteur Institute on 560 volunteers.

IVAC and Vabiotech have announced the recruitment of volunteers and planned to start the first phase of clinical trial in early March.

“In case of emergency, the Ministry of Health will minimize the process on the basis of ensuring safety, how to get the fastest results,” Deputy Minister Thuan said.

To prepare for the third phase trial of Nanocovax vaccine, the Ministry of Health has discussed with the embassies of India, Indonesia, Bangladesh … for the trial of the vaccine in these countries to ensure safety and scientific basis.

“If the test goes smoothly and it proves effective, it is expected that by the end of this year, we can have the first vaccine Covid-19 produced by Vietnam,” Deputy Minister Thuan said.

Dr. Nguyen Ngo Quang, Deputy Director of Department of Science, Technology and Training of the Ministry of Health, reported to Deputy Prime Minister Vu Duc Dam at a meeting last Friday that during the first phase of trial, Nanocovax vaccine was safe and has no adverse effects.

The vaccine provides very good immunogenicity, but there are differences between the doses of 25mcg, 50mcg and 75mcg. There is no official comparison data yet as the time is short and the number of samples is small.

Quang said that in the second phase, with the participation of the Ho Chi Minh City Pasteur Institute, the trial period can be shortened to three months instead of six months as originally planned.

READ MORE:  Two more wholesale markets in Hanoi was shut down due to Covid-19

So far, the number of volunteers registered for the second phase has reached nearly 1,000 people. Standards for choosing volunteers in phase 2 are relaxed, including people over 65 years old, people with chronic diseases such as diabetes, hypertension…

If the first injection is given at the beginning of this week, the second injection for phase 2 will be completed at the end of March, and the evaluation results will be available at the end of April. If the research data meets the requirements for safety and immunogenicity, testing in phase 3 may start in mid-May 2021 on 10,000-30,000 people.

In phase 3, the decision to immediately vaccinate Vietnamese people in high-risk groups such as anti-epidemic forces, airport staff, flight attendants… will be made by the Ethics Council, based on the results of clinical trial phase 2.

Since early 2020, when the Covid-19 epidemic broke out, large corporations in Vietnam such as Vingroup, Sun Group, T&T, and IPPG have donated hundreds of billions of VND for epidemic prevention. They also have donations to make ventilators, and research and manufacture vaccines in the country. Local groups are ready to support the Government’s call for their contributions to buy vaccines.

Many foreign-invested companies have also expressed their desire to contribute to the Covid-19 vaccination program in Vietnam. Suntory PepsiCo, URC, LaVie, Nestle and others said that they are willing to fund all of their employees and their families to be vaccinated. This will contribute to repelling the Covid-19 epidemic, and bringing life back to a normal state, thereby ensuring the development of production and business activities.