E-wallets in Vietnam have strongly benefited from the change in payment habits during the Covid-19 pandemic.

Vietnam’s mobile e-commerce is rapidly growing with an estimated value of US$10.2 billion by 2023, according to 2021 Vietnam Mobile Application Report, conducted by the market research company Appota.

The report revealed that mobile e-commerce is showing dramatic growth as it accounts for nearly half of all business-to-consumer e-commerce revenue in Vietnam.

In terms of transaction rates, the mobile platform also manifested a strong superiority over the desktop, accounting for 62% of all transactions. Meanwhile, the number via the desktop accounted for only 38%.

Last year, the country had 49 million online shoppers aged 15 and above, the 3rd highest in Southeast Asia, behind Indonesia (137 million) and the Philippines (57 million). However, this figure only accounted for 65% of the total number, a modest rate compared to Malaysia (83%), Singapore (79%) and the Philippines (74%). 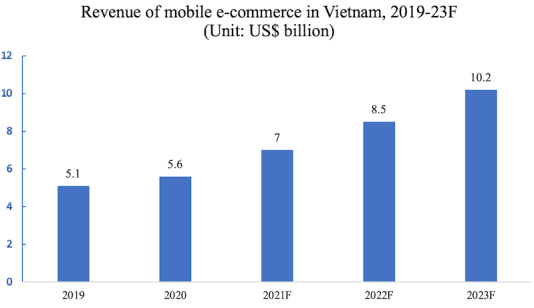 “This shows the opportunities of the payment and e-commerce markets both in terms of number of users and purchase value in Vietnam is potential in the coming time,” the report noted.

According to a We Are Social’s survey, the age group from 25 to 54 years old is those who shopped the most, accounting for about 82-85% of the surveyed respondents. Generation Z, accounting for 70.6%, is the pioneer and easily updates online shopping trends. However, the middle-aged customer group is familiar with this model and thus, continues promoting online shopping.

As financial and economic losses affect the purchasing power of consumers, transaction value in 2020 didn’t witness a sharp growth compared to 2019. Total digital transactions in Vietnam in 2020 reached US$11.6 billion.

In 2020, total spending through online channels in the country averaged US$280.3 per person, of which transactions via mobile POS and digital commerce accounted for 21.8% and 78.2%, respectively.

When Vietnam’s economy is expected to recover after the pandemic, the digital payment value this year is forecast to reach nearly US$15.1 billion, an increase of 30% against 2020.

According to the German-based market research company Statista, spending via digital commerce is estimated at nearly US$250 per capita in 2021 while it will be nearly US$74 via mobile POS payments. In 2020, there were 121 startups operating in the fintech sector in Vietnam, of which e-payment has the largest number of fintech startups, accounting for 31%, followed by peer-to-peer (P2P) lending with a 16% market share.

From a business’ view, Natalia Kovalenko, Managing Director of Lendtop Ltd, providing MoneyCat app, believes Vietnam will see great growth in the field if the legal framework for fintech activities including P2P is completed soon.

The Vietnamese government is making great efforts in building and preparing the legal basis for this field, also known as the sandbox test management mechanism, Kovalenko added. “We look forward to join in the sandbox,” she told Hanoitimes.

Vietnam’s leading e-wallets have strongly benefited from the change in payment habits at home and the number of users increased sharply over the past year.

READ MORE:  Largest Firms in Asia Have More to Do to Address Their Biodiversity-Related Issues. Here’s Why

Last September, Momo wallet announced 20 million individual users, becoming the most used e-wallet in Vietnam. Meanwhile, the Vietnamese payment startup VNPay was valued at over US$1 billion, according to Google’s Economy SEA 2020 report, and it is considered as the second unicorn startup behind VNG.

Regarding the number of downloads, Momo holds the position as the most downloaded e-wallet, peaking in February and March with 992,000 and 839,000 downloads, respectively. Viettel Pay and ZaloPay are in fierce competition when the latter’s number surpassed the former’s ones as of February.

This article was originally published in Hanoitimes