The Recovery of Vietnam Is Made in America: WSJ

Blighted last year by the halt to international travel, Vietnam’s economy is returning to solid export-fueled growth that will likely continue thanks to U.S. fiscal stimulus.

Vietnam’s economy is growing again, on the back of a strong rise in exports. The Southeast Asian nation looks to be one of the most clear-cut international beneficiaries of the U.S. stimulus package.

First-quarter gross domestic product was up 4.5% relative to last year’s figure, according to an initial estimate released Monday. The recovery is being driven by a surge in goods and services sold abroad, which rose almost 20% year-over-year in March. Sales to the U.S. specifically are likely rising even faster, with no sign of a slowdown on the horizon. 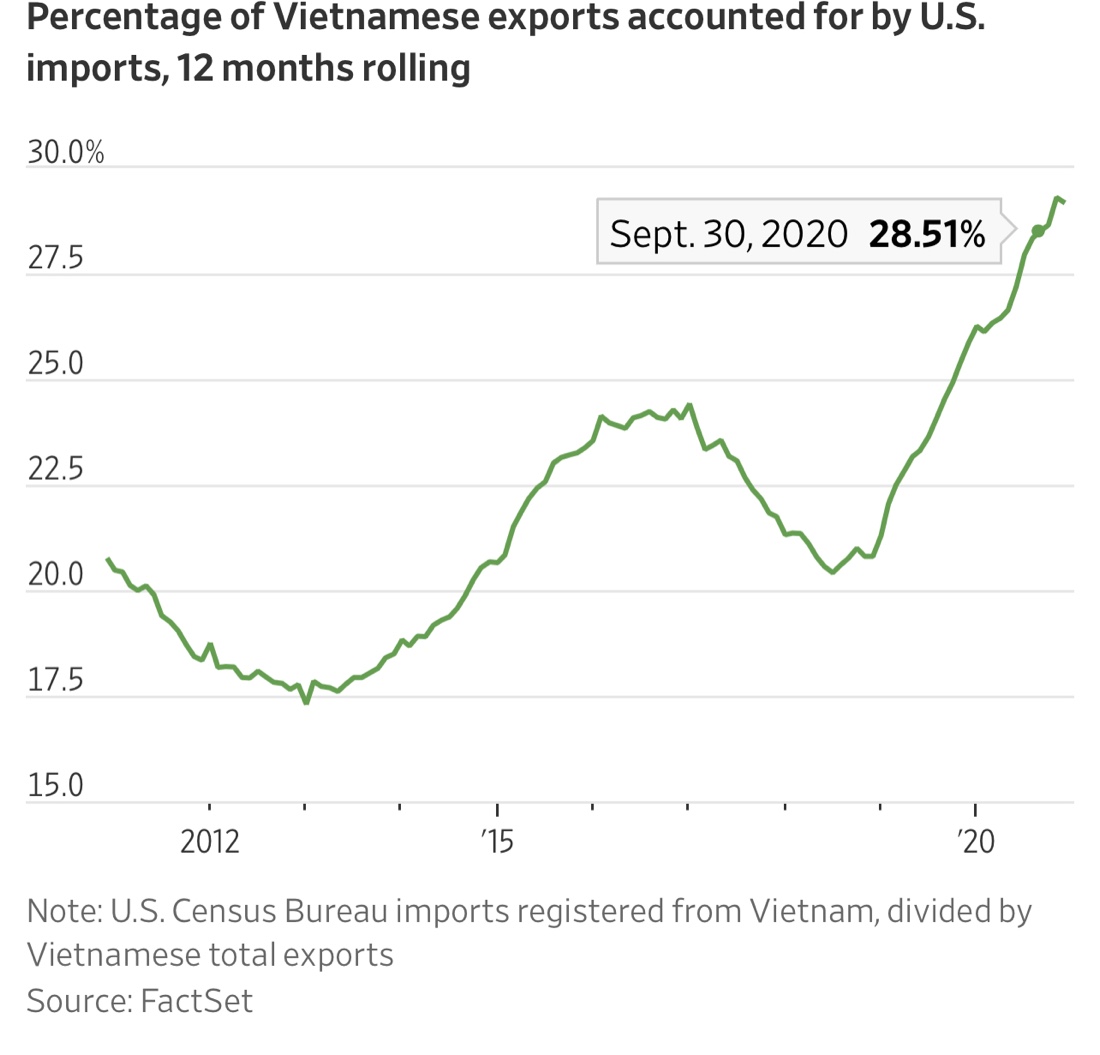 Using Vietnamese export data and U.S. data for imports from Vietnam, it is clear that the American share of Vietnam’s overseas sales has risen considerably. In the 12 months through January, U.S. imports from Vietnam were equivalent to about 29% of the Asian country’s total exports, far higher than the roughly 20% average before 2019. Some caution is needed when data come from different organizations, but historically the two series tend to match up with figures published with a lag by the International Monetary Fund, which are considered the gold standard.

Vietnam emerged as a big winner from the China-U.S. trade spat. Some supply chains reoriented away from China, and the country also was a logical docking station for multistage “transshipments” to avoid American tariffs.

Some of those gains may not be repeatable, but given the fiscal splurge in Washington, it is likely that the U.S. share of Vietnam’s exports will remain high for some time. Domestic economic growth in the order of 6.5% this year—as forecast by the Organization for Economic Cooperation and Development—will keep U.S. import demand strong and business brisk for export-focused Vietnamese companies.

Vietnam’s control of the Covid-19 pandemic is among the most impressive in the world, especially given the country’s income bracket. But that hasn’t been enough to protect a domestic economy with large exposure to tourism revenues during a year in which international travel all but ceased.

The country’s merchandise trade—the import-export business—ran to almost 200% of GDP in 2019, among the highest in the world. Such huge exposure to international commerce would be damaging during a more normal recession, but in this one it has provided crucial economic ballast. Other countries in the region will likely have to wait far longer to fully recover economic losses incurred during the pandemic.

The Ho Chi Minh index of Vietnamese equities has now caught back up with the S&P 500 in price terms since the beginning of 2020. Each is up by a little over 20%. But investors need to be careful when seeking direct exposure to Vietnam: The sole exchange-traded fund, the VanEck Vectors Vietnam ETF, is up roughly 11% over the same period, having lagged behind the broad market fairly consistently since its inception in 2009. Many actively managed Vietnam funds have performed far better.

The U.S. economic resurgence could persist a while as Washington’s latest stimulus bill feeds through to American consumers. Vietnam is among the nations best placed to ride its coattails.