The Metaverse dream is beyond Mark Zuckerberg’s reach

Mark Zuckerberg is still struggling with his metaverse ambitions.

Mark Zuckerberg – CEO Meta – parent company Facebook is now wanting people to focus entirely on his promise of the metaverse (virtual universe). Appearing on Joe Rogan’s podcast on August 25, Mark is undaunted by recent mockery directed at Horizon Worlds – the virtual reality platform that Meta recently launched and is determined to advertise its benefits.

In addition to giving Rogan a try on an early version of the company’s upcoming headset, called Project Cambria, Zuckerberg seems to be using the interview to get people’s attention on the effort of the company’s augmented and virtual reality business.

Commenting on the goal of the interview with Rogan, Bloomberg notes that Mark is trying to “flirt” with Rogan’s mostly male fan base, estimated at 11 million per episode. In the interview, the Facebook founder argued that VR and AR will revolutionize work, socialization and exercise, and will replace other forms of entertainment, especially television.

Zuckerberg said that, personally, he doesn’t watch TV, except for UFC fights, because he considers the medium too “passive” compared to social media. Zuckerberg said interactions on the social network will happen on smart glasses and will be controlled by brain waves. 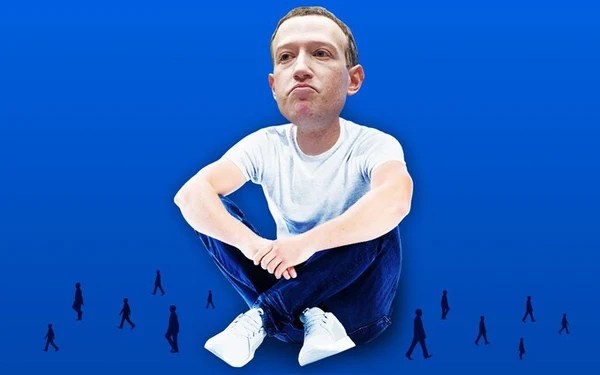 “You will be able to have this experience in the future: When you are sitting in a meeting and your wife texts and it will show up in the corner of your glass. You want to answer, but you don’t want to pull out your phone because that’s rude.” Users of Meta’s augmented reality products, he continued, will be able to send messages with a “virtual hand” that they control with their mind to send text messages. “Nobody even knows you’re doing it and you just need to send a message.”

READ MORE:  Looking back at VinFast’s ‘growing up fast’ journey

If the goal of Zuckerberg’s three-hour interview was “a marketing session,” it shows how badly the company has pivoted into the metaverse. They started more than eight years ago with the $2 billion purchase of Oculus VR and have expanded pretty much every year since without much results.

Meta has built an incredibly effective online advertising business that pops up in its social media properties, generating $116 billion in revenue and $57 billion in profit by 2021. Reality Labs, name company devoted to the VR and AR businesses, generating only $2 billion in revenue, a very small number by comparison that’s even worse when you consider how much money Meta spent creating it.

Meta reported a $10 billion loss for Reality Labs in 2021, excluding the billions of dollars Facebook spent buying Oculus and developing, manufacturing, and marketing VR headsets consecutively from 2014 to 2020. Last year’s big loss has only increased this year, growing 15% in the most recent quarter compared with the same period in 2021.

Luckily for Zuckerberg, the company’s ad business is big and solid enough to safely lose billions of dollars on the metaverse for years to come.

Zuckerberg presents these losses as an investment, as if Meta were channeling all that money into basic research and as if the ideas were completely new to consumers. But Facebook has spent most of its history as a publicly traded company actively marketing VR headsets, both on its own giant platform and elsewhere.

People first heard Zuckerberg’s VR pitch in 2015, a year after the Oculus acquisition. Listening to Rogan’s podcast, it’s amazing how little has changed since then. Back in the mid-2010s, Zuckerberg and his deputies talked about how the company’s VR product, then called the Rift, gave users a sense of physical presence, which they gave that will change the game for remote work . They admit that VR will be a big deal for games. But the video game business is just the beginning.

READ MORE:  What makes Vietnamese chocolate unique in the world?

Of course, this is not an easy ambition. But consumers reacted much less enthusiastically, and Facebook turned over a slew of executives as they searched for a winning formula. In 2016, for the commercial release of the Rift, the company set up mini-stores in 500 Best Buy stores to promote the new device. A year later, they closed hundreds of stores after consumers failed to show up for the launches.

Since then, Zuckerberg has advertised the VR device, often very unprofessionally, at countless speeches and media appearances. In February, during the Super Bowl, he aired an elaborate but rather “strange” one-minute commercial in which an elderly cartoon dog recaptured rock ‘n’ roll glory. yourself by messing with your friends in the VR game Horizon Worlds.

Facebook advertised Horizon Worlds for three years. This array was first introduced in 2019 with another sophisticated marketing campaign. Zuckerberg still insists Horizon Worlds will be great for games and meetings, even as it continues to draw derision, from residents and VR enthusiasts alike. On August 26, the day after Zuckerberg’s “show” on Rogan’s Podcast, Vivek Sharma, the game’s supervisor, announced his resignation from the company.

To be fair, Meta has had some modest success. The company’s latest VR headset, Quest 2, has sold nearly 15 million units since it went on sale two years ago, according to analyst estimates. But Reality Labs’ financial performance and recent news that the company will raise the price suggest that Meta sold the device at a substantial loss.

In February, after the Super Bowl commercial, the company announced that 300,000 people had followed the animatronic dog into their VR platform. That sounds impressive — Meta notes that this represents a 10-fold increase in monthly usage in December — but it’s still a fraction of what rival Second Life draws. was at the peak of its popularity.

Meanwhile, Meta’s flagship social networking app Facebook attracts about 2 billion people every day; that number is close to 3 billion when including Instagram and WhatsApp. In other words, despite years of publicity, billions of dollars in investments, and an insanely expensive Super Bowl commercial, all the company was able to pull off was a monthly audience, representing 0.01% of all sales. What the company attracts. If Horizon Worlds were made by some other company, Zuckerberg probably wouldn’t bother copying it.

After being mocked online for posting a “selfie” featuring a cartoon avatar and crude description of the Eiffel Tower that looked as if it had been ripped out of a ’90s video game, Zuckerberg has reappeared a few days later on Instagram with a new photo and improved profile picture. According to a later deleted LinkedIn post from a Meta employee, Mark’s mercilessly criticized avatar is the product of four weeks of work in 40 different versions.

Luckily for Zuckerberg, the company’s ad business is large and solid enough to safely lose billions of dollars on the metaverse for years to come, while maintaining its dominance on social media. . Still, many question whether founder and CEO Zuckerberg is still the best spokesperson for these efforts.