In the first 3 months of the year, 4 factories of Samsung Electronics (Korea) located in Vietnam earned more than 24 trillion won, equivalent to nearly 20.2 billion USD at the exchange rate at the end of March.

Thanks to a significant improvement in gross profit margin from 36.5% last period to 39.5% this period, along with a 14% (approximately USD 1.45 billion) reduction in selling and administrative expenses, profit after tax of this electronics manufacturer increased by 59%, reaching nearly 5.93 billion USD.

Specifically, in the first quarter of this year, these 4 factories brought in a total of more than 24 trillion won for parent group Samsung Korea, equivalent to 20.19 billion USD at the exchange rate at the end of March. Last year, the revenue of four Samsung factories in Vietnam increased by 22%. 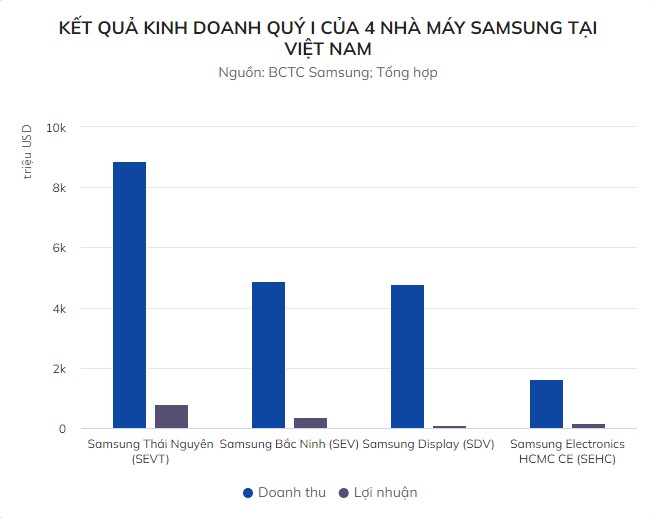 In which, the factory that contributes the most revenue for Samsung in Vietnam market is still Samsung Thai Nguyen (SEVT) with 8.89 billion USD in the first quarter, up 30% over the same period. This is also the highest level of revenue that this factory has recorded in a business quarter.

In addition to Samsung Thai Nguyen, the remaining 3 factories of this group in Vietnam market also recorded revenue growth in the first quarter of this year. In which, Samsung Bac Ninh’s revenue (SEV) increased by 9%, bringing in 4.89 billion USD; Samsung Display (SDV) increased by 28%, contributing USD 4.77 billion and Samsung HCMC CE (SEHC) brought in USD 1.64 billion, up 10%.

READ MORE:  Many enterprises in the leather and footwear have a impressive growth during this time

After deducting incurred costs, 4 factories in Vietnam brought the parent group more than 1.45 billion USD in profit, also up 21% over the same period last year.

With this target, Samsung Thai Nguyen is also the factory with the highest profit contribution with nearly 810 million USD in the first quarter, up 45% over the same period.

Meanwhile, Samsung HCMC CE brought in 170 million USD in profit in the quarter, up 155%.