A long-feared Russian invasion of Ukraine appeared to be imminent Monday, if not already underway, with Russian President Vladimir Putin ordering forces into separatist regions of eastern Ukraine.

A vaguely worded decree signed by Putin did not say if troops were on the move, and it cast the order as an effort to “maintain peace.” But it appeared to dash the slim remaining hopes of averting a major conflict in Europe that could cause massive casualties, energy shortages on the continent and economic chaos around the globe.

Related: U.S. President Joe Biden and Russian President Vladimir Putin have agreed in principle to a summit over Ukraine

Putin’s directive came hours after he recognized the separatist regions in a rambling, fact-bending discourse on European history. The move paved the way to provide them military support, antagonizing Western leaders who regard it as a breach of world order, and set off a frenzied scramble by the U.S. and others to respond.

Underscoring the urgency, the U.N. Security Council held a rare nighttime emergency meeting on Monday at the request of Ukraine, the U.S. and other countries. Undersecretary-General Rosemary DiCarlo opened the session with a warning that “the risk of major conflict is real and needs to be prevented at all costs.”

Ukraine’s president, Volodymyr Zelenskyy, sought to project calm, telling the country: “We are not afraid of anyone or anything. We don’t owe anyone anything. And we won’t give anything to anyone.” His foreign minister, Dmytro Kuleba, would be in Washington on Tuesday to meet with Secretary of State Antony Blinken, the State Department said.

The White House issued an executive order to prohibit U.S. investment and trade in the separatist regions, and additional measures — likely sanctions — were to be announced Tuesday. Those sanctions are independent of what Washington has prepared in the event of a Russian invasion, according to a senior administration official who briefed reporters on the condition of anonymity.

The State Department, meanwhile, said U.S. personnel in Lviv — in Ukraine’s far west — would spend the night in Poland but return to Ukraine to continue their diplomatic work and emergency consular services. It again urged any American citizens in Ukraine to leave immediately.

The developments came during a spike in skirmishes in the eastern regions that Western powers believe Russia could use as a pretext for an attack on the Western-looking democracy that has defied Moscow’s attempts to pull it back into its orbit.

Putin justified his decision in a far-reaching, pre-recorded speech blaming NATO for the current crisis and calling the U.S.-led alliance an existential threat to Russia. Sweeping through more than a century of history, he painted today’s Ukraine as a modern construct that is inextricably linked to Russia. He charged that Ukraine had inherited Russia’s historic lands and after the Soviet collapse was used by the West to contain Russia. 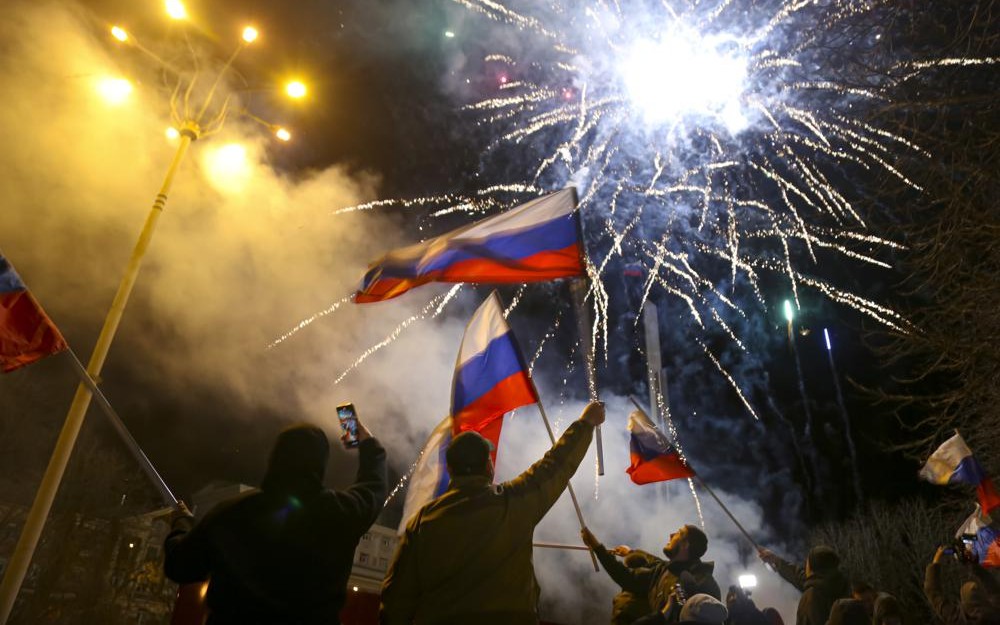 People wave Russian national flags celebrating the recognizing the independence in the center of Donetsk, the territory controlled by pro-Russian militants, eastern Ukraine, late Monday, Feb. 21, 2022. In a fast-moving political theater, Russian President Vladimir Putin has moved quickly to recognize the independence of separatist regions in eastern Ukraine in a show of defiance against the West amid fears of Russian invasion in Ukraine. (AP Photo/Alexei Alexandrov)

Until now, Ukraine and the West have accused Russia of supporting the separatists with arms and troops, but Moscow has denied that, saying that Russians who fought there were volunteers.

At an earlier meeting of Putin’s Security Council, a stream of top officials argued for recognizing the regions’ independence. One slipped up and said he favored including them as part of Russia — but Putin quickly corrected him.

Ukrainians in Kyiv, meanwhile, bristled at the move.

“Why should Russia recognize (the rebel-held regions)? If neighbors come to you and say, ‘This room will be ours,’ would you care about their opinion or not? It’s your flat, and it will be always your flat,” said Maria Levchyshchyna, a 48-year-old painter in the Ukrainian capital. “Let them recognize whatever they want. But in my view, it can also provoke a war, because normal people will fight for their country.”

With an estimated 150,000 Russian troops massed on three sides of Ukraine, the U.S. has warned that Moscow has already decided to invade. Still, President Joe Biden and Putin tentatively agreed to a meeting brokered by French President Emmanuel Macron in a last-ditch effort to avoid war.

If Russia moves in, the meeting will be off, but the prospect of a face-to-face summit resuscitated hopes in diplomacy to prevent a conflict that could devastate Ukraine and cause huge economic damage across Europe, which is heavily dependent on Russian energy.

Russia says it wants Western guarantees that NATO won’t allow Ukraine and other former Soviet countries to join as members — and Putin said Monday that a simple moratorium on Ukraine’s accession wouldn’t be enough. Moscow has also demanded the alliance halt weapons deployments to Ukraine and roll back its forces from Eastern Europe — demands flatly rejected by the West.

Macron’s office said Biden and Putin had “accepted the principle of such a summit,” to be followed by a broader meeting that would include other “relevant stakeholders to discuss security and strategic stability in Europe.”

U.S. national security adviser Jake Sullivan, meanwhile, said the administration has always been ready to talk to avert a war — but was also prepared to respond to any attack.

During Monday night’s emergency meeting, the U.S. ambassador to the United Nations, Linda Thomas-Greenfield, said Putin “has put before the world a choice” and it “must not look away” because “history tells us that looking the other way in the face of such hostility will be a far more costly path.”

China’s U.N. Ambassador Zhang Jun called for restraint and a diplomatic solution to the crisis.

That deal was resented by many in Ukraine who saw it as a capitulation, a blow to the country’s integrity and a betrayal of national interests. Putin and other officials argued Monday that the Ukrainian government has shown no appetite for implementing it.

READ MORE:  How did the Man United dressing room get so messed up?

Over 14,000 people have been killed since conflict erupted in the eastern industrial heartland of Donbas in 2014, shortly after Moscow annexed Ukraine’s Crimean Peninsula.

Potential flashpoints multiplied. Sustained shelling continued Monday along the tense line of contact separating the opposing forces. Unusually, Russia said it had fended off an “incursion” from Ukraine — which Ukrainian officials denied. And Russia decided to prolong military drills in Belarus, which could offer a staging ground for an attack on the Ukrainian capital, Kyiv.

Ukraine and the separatist rebels have traded blame for cease-fire violations with hundreds of explosions recorded daily.

While separatists have charged that Ukrainian forces were firing on residential areas, Associated Press journalists reporting from several towns and villages in Ukrainian-held territory along the line of contact have not witnessed any notable escalation from the Ukrainian side and have documented signs of intensified shelling by the separatists that destroyed homes and ripped up roads.

Some residents of the main rebel-held city of Donetsk described sporadic shelling by Ukrainian forces, but they added that it wasn’t on the same scale as earlier in the conflict.

The separatist authorities said Monday that at least four civilians were killed by Ukrainian shelling over the past 24 hours, and several others were wounded. Ukraine’s military said two Ukrainian soldiers were killed over the weekend, and another serviceman was wounded Monday.

In the village of Novognativka on the Ukraine government-controlled side, 60-year-old Ekaterina Evseeva said the shelling was worse than at the height of fighting early in the conflict.

“We are on the edge of nervous breakdowns,” she said, her voice trembling. “And there is nowhere to run.”

With fears of invasion high, the U.S. administration sent a letter to the United Nations human rights chief claiming that Moscow has compiled a list of Ukrainians to be killed or sent to detention camps after the invasion. The letter, first reported by The New York Times, was obtained by the AP.

Kremlin spokesman Dmitry Peskov said the claim was a lie and no such list exists.