The “extraordinary” is still happening, but the reaction to the current USD/VND exchange rate fluctuations is not surprising…

Faced with fluctuations in the USD/VND exchange rate, on September 30, the State Bank’s Transaction Office once again decided to sharply increase the selling price of USD, for the second time in a row within a month, from 23,700 VND to 23,925 VND.

The “extraordinary” is still happening and has a more complicated direction.

Previously, some experts with many years of experience in exchange rate issues considered the current fluctuations as “extraordinary”. Because according to normal correlations, the VND should have appreciated.

Firstly, the VND interest rate is many times higher than the USD interest rate, even though the US Federal Reserve (Fed) has increased sharply recently. 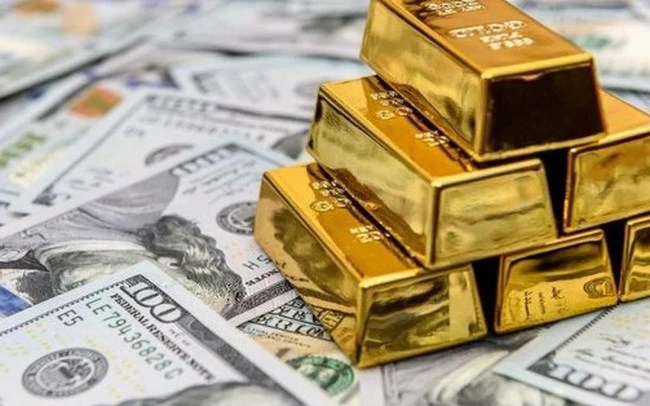 In June and July 2022, recognizing the situation in time, the State Bank of Vietnam (SBV) quickly made a “policy adjustment” when it returned to continuously withdrawing money, indirectly causing VND interest rates to increase sharply on the interbank market; before that, the VND interest rate was only around 1-1.5%/year, significantly lower than the USD interest rate in the same market (around 2.5%/year).

And as recently, the State Bank continued to have a decision to simultaneously increase operating interest rates, including the ceiling deposit rate. Before and after this adjustment, the VND deposit interest rate has increased quite strongly, the latest update the actual highest level has been up to 8.4%/year (actually because it has been applied to both small deposits instead of being a “trick” for banks as a reference to calculate lending interest rates and only applied to deposits of 500 billion VND or more).

Meanwhile, the USD deposit interest rate ceiling in Vietnam is still 0%. Just like in the interbank market, the VND interest rate was many times higher than the USD interest rate. The continuously rising USD/VND exchange rate becomes “unusual” in such an interest rate differential.

Second, as experts have explained and analyzed, Vietnam’s inflation is much lower than that of the US. However, the USD still appreciates and VND still depreciates quite strongly against USD.

Not stopping, after the USD cooled down significantly, the USD Index dropped from nearly 115 points to 112 points, as well as the SBV’s series of adjustments mentioned above, the USD/VND exchange rate continued to be “unusual” and increased, in the direction of VND depreciating.

As some experts have explained about the above “unusual”, besides the balances, the context has big influencing factors. Geopolitical events, the Russia-Ukraine conflict, the risks of the investment markets being exposed… make capital flows and flows more sensitive; in which, there is a tendency to look to USD for shelter and this currency increases in value.

In Vietnam too, the reaction in the economy is an unmeasurable pressure on the USD/VND exchange rate; it has an immediate impact on the supply-demand balance of foreign currencies in the market.

First of all, currently, the SBV has not updated data on the overall balance closer so that it can refer to the status of surplus or deficit and the level in more detail. According to the General Statistics Office, Vietnam is estimated to have a large trade surplus in the first 9 months of this year, especially in the trade balance.

In the assumption that foreign currency sources in the economy, the balances are still favorable or not too unfavorable for supply – demand and for the exchange rate, the reaction of the population and businesses to fluctuations becomes a pressure. It is worth noting that the source of foreign currency here is temporarily withdrawn from circulation, causing an imbalance of supply – demand and increasing the exchange rate…

After many years of calm with the exchange rate of USD/VND, the rapid and strong fluctuations from the end of May 2022 to now must have awakened foreign currency speculation in the economy; In fact, there have also been reflections that people are trying to buy and collect foreign currencies at banks and sell them in the free market to make a difference, or hold on to wait for the price to go up.

READ MORE:  A western province has the highest percentage of qualified workers in the country

Similarly, businesses with foreign currency revenue can also “temporarily suspend” selling transactions, linger or even hold on to wait for prices to rise; by 2-3%, even higher, in a short time is also a significant amount of added value.

On the contrary, it is impossible to forget that in the past 2021, Vietnam’s businesses (and banks) had a record crop of “bottom-fishing” during the pandemic, with the amount of foreign commercial loans, the issuance of bonds, … large-scale international bonds… Of course, this activity has the business of spreading risks, using derivative products to hedge against exchange rate risk, but with the current volatility, it must be creating noticeable pressure. Just like in the corporate bond market, further borrowing to reverse debt here is no longer as favorable as before (if there is a need).

Back to the activities of speculation and hoarding foreign currency in the economy, the pressure here has haunted many times in the past.

In the period 2008-2009, when the USD/VND exchange rate was floating, the writer had a reaction from readers when writing about the phenomenon of speculation and hoarding mentioned above. That reaction is that people and businesses speculate, hoard foreign currency for their own benefit, see profit and do; That’s a normal reaction. And this view says that, with that activity, it is also “rich people, strong country”, “rich businesses, stronger economy”. The rest is how to manage policies to limit speculation and hoarding.

However, repentance is a complicated issue, it involves the terms of international commitments. Previously, in 2005 Vietnam also abolished this regulation.

A little closer, in 2011, the USD/VND exchange rate also fluctuated strongly and was very stressful. Those interested in the exchange rate must always remember the “historic correction” in February 2011. And on May 31, 2011 the State Bank issued Circular No. 13, which stipulates that economic groups and state-owned corporations must resell foreign currency to banks…

As above, the commitment has two sides and is also bound by the terms of integration. It can, of course, be applied in a momentary, short-term and special situation…

Meanwhile, one of the important links for speculation, hoarding and foreign currency trading, which has existed for decades, has yet to be fully resolved.

That is the existence of the free market, also known as the “black market”. Sanctions have “learned” in the previous stage, drastically when applying the confiscation of all relevant exhibits when detecting and handling violations, but the free market and underground transactions are still there. For example, since the beginning of the year, authorities have repeatedly arrested large-scale foreign currency smuggling cases abroad, a common purpose is to smuggle gold back.

As for people and businesses, they react in a favorable way and within the framework of the law allowing or not prohibiting. In order to “defrost” conventional speculation and foreign currency hoarding, policy needs to balance relevant interests.

Here, as above, holding VND is giving interest rate difference many times higher than holding USD for interest rate and exchange rate difference. But that is the past. Speculation and short-term foreign currency holding is now expected to continue to appreciate and become more attractive in the near future. So, does the State Bank need to orient this expectation and lead it to a reasonable point?

Part of the answer is also tied to the context ahead. The Fed is still “hawkish”, as well as orienting the roadmap to continue raising interest rates until the beginning of 2023. Accordingly, challenges and pressures on exchange rates, speculation and foreign currency hoarding with the expectation ahead, still remain. is and will be a noticeable pressure; Even if the Fed increases interest rates even more, according to one expert, the range of around 4.5%/year is still not really high in the comparison series of about 70 years, but only high compared to the specific period of time just eased before the impact of the recent pandemic.