Pharmacity currently has 1,093 GPP-certified pharmacies operating nationwide. This pharmacy chain aims to open 5,000 stores by 2025, with a revenue of 1.5 billion USD.

The remaining establishments all operate in the form of pharmacies/drugstores and have been granted certificates of eligibility for pharmacy business in the period of 2019 – 2021. Prominent among them are 5 Pharmacy pharmacies belonging to Pharmacity Pharmaceutical JSC. – The Hanoi branch. 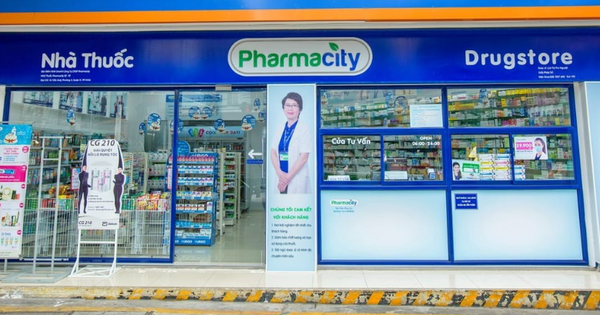 Established in 2011, Pharmacity is one of three major drugstore chains in Vietnam, next to Mobile World’s An Khang pharmacy chain (MWG) and FPT Retail’s Long Chau pharmacy chain (FRT).

Currently, Pharmacity has 1,093 GPP-certified pharmacies operating nationwide. This pharmacy chain aims to open 5,000 stores by 2025, with a revenue of 1.5 billion USD.

Pharmacity’s process of ‘expanding’ the pharmaceutical retail market has been accelerated since 2019, after this pharmacy chain received a financial support commitment from Mekong Enterprise Fund III – a member fund of Mekong Capital.

Pharmacity’s business activities have achieved many impressive results with the mobilized capital. Specifically, in 2019, Pharmacity recorded revenue of VND 966.5 billion, an increase of 7.87 times compared to VND 123.2 billion in 2016.

However, this pharmaceutical company continuously reported losses. Particularly in 2019, Pharmacity reported a loss after tax of 265.7 billion dongs. In the first half of 2020, Pharmacity continued to report an after-tax loss of 194.2 billion dongs.

In 2021, Pharmacity said that the company’s revenue reached VND 3,567 billion, double that of 2020. This business also revealed that it started to be profitable from July 2021, according to the EBITDA index (earnings before tax, interest, and depreciation).

Recently, Pharmacity appointed Ms. Tran Tue Tri to hold the position of General Director. Ms. Tri was introduced with more than 25 years of experience in the retail and consumer sectors, having held many senior positions at Samsung, P&G, and Unilever both in Vietnam and abroad.

READ MORE:  Could VinFast become a rival of Tesla?

Before that, in mid-August 2022, founder and CEO Christopher Randy Stroud (Chris Blank) was no longer the legal representative of Pharmacity. Replacing this position is Mr. Nguyen Nhu Nam – an employee who is said to be an investment manager of SK Group.