On average, Vietnamese people buy a car every minute

Sales of the Vietnamese auto market in April reached 51,745 vehicles, equivalent to every minute, a new car finds an owner.

The effect of the preferential policy of 50% reduction in registration fees for domestically assembled cars (Decree 103, applied until the end of May 2022) helps the sales of the Vietnamese auto market continue to grow. In which, the Vietnam Automobile Manufacturers Association (VAMA) sold 42,359 vehicles, Hyundai Thanh Cong (HTC) 6,959 vehicles and VinFast 2,427 vehicles.

Total sales of VAMA, HTC and VinFast reached 51,745 vehicles in April, an increase of about 8% compared to March and an increase of nearly 32% compared to the same period in 2021. This sales volume does not include automakers that do not disclose data such as Subaru, Nissan, Volkswagen, Audi, Mercedes…

With nearly 52,000 cars sold, 1.2 cars are delivered to customers every minute. This is one-sixth of the motorcycle market. Although the auto industry is facing supply difficulties, this year’s sales still bring more optimistic signals than many years ago, also because the whole market freezes in 2021 because of the epidemic. 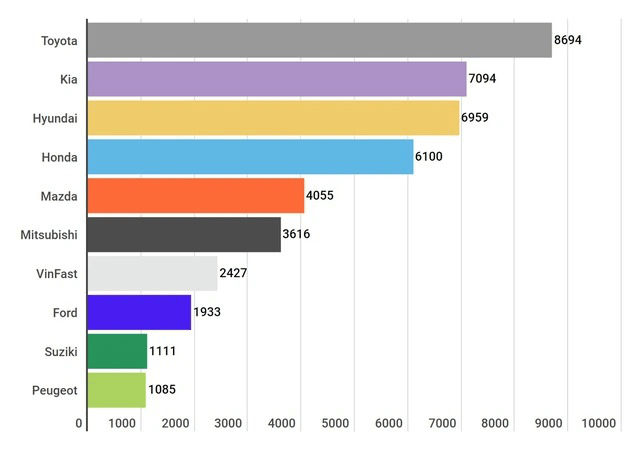 Toyota still plays a leading role. Corolla Cross and Vios both sold well in April (over 2,000 vehicles), helping the Japanese joint venture continue to dominate the market with more than 8,600 vehicles sold.

Right behind is Kia, a company distributed by Truong Hai, with more than 7,000 cars delivered to users. This is the second month from the beginning of 2022, Kia sales surpass Hyundai. Kia’s 4-month cumulative number also surpasses Hyundai’s (only for cars). In the top 10 best-selling cars in the market in April, Kia contributed 2 names, K3 and Seltos.

Honda is the company with the highest growth in the passenger car segment, 69% compared to March. City and CR-V both reached the top of best-selling cars, helping the Japanese company to rank third in the market in terms of car sales for a rare time, after Toyota and Kia.

The total number increased, but not all firms’ sales prospered. Supply difficulties caused Hyundai Thanh Cong and VinFast to sell in April down 2% and 31% respectively compared to March.

Hyundai last month only had one representative in the top 10, Accent. However, this is only a ranking in the condition that the company lacks production components, so the supply cannot keep up with the demand. When the number of cars is abundant again, Hyundai will threaten Toyota’s number one position, not just Kia’s number two.

Within VAMA, companies such as Mitsubishi, Suzuki, and Isuzu also reduced sales.

The Vietnamese auto market has only one month of sales left before Decree 103 expires. Currently, most of the new cars ordered at dealers in May cannot be delivered in time this month due to a shortage of supply.