Nearly 480,000 new accounts opened in May, double the previous month

According to data from the Vietnam Securities Depository (VSD), domestic investors opened 476,455 new securities accounts in May, double that of the previous month and a record number in history.

After the strong correction in May, the Vietnamese stock market is recording relatively prosperous trading sessions. The VN-Index recovered continuously in the first three sessions of the week, especially breaking through nearly 17 points in the session of June 8 to successfully regain the important level of 1,300.

However, in the context of the market’s positive changes after many weeks of sliding, trading at low levels is still the dominant trend instead of a follow-through boom as expected by many investors. Session 9/6 recorded the matching value on HoSE at only 11,876 billion dong, the lowest since the beginning of the week. If looking broadly at the previous May, liquidity recorded a pressure drop when the average trading value in the month was just over 17,700 billion dong/session, down more than 30% compared to the trading value in April and lower. much higher than the average level of VND 30,000 billion/day in November 2021. 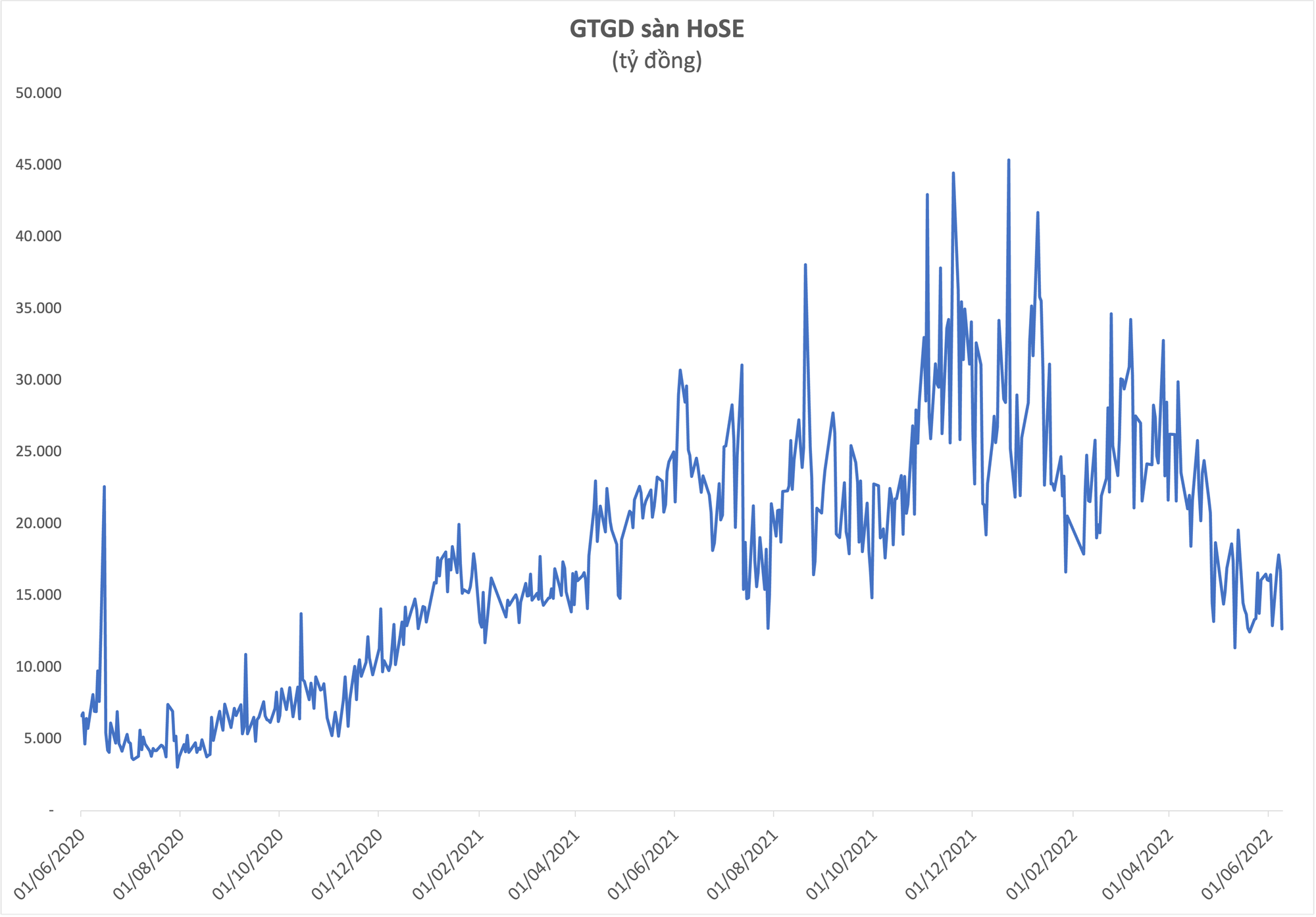 In fact, the joy of “showers after drought” was not so strong from the previous recovery spans from the bottom of the market. This has surprised investors in the last 2 years, when they were used to the massive cash inflow by the wave of new investors F0 landed in securities. Whenever the market fluctuates strongly, immediately the liquidity will be pushed to a very high threshold, the level of over 30,000 billion is not too uncommon because investors are not afraid to race orders. Therefore, even when the VN-Index fell by more than 200 points but the cash flow was still “indifferent”, many investors found it even more difficult to explain. In particular, liquidity continuously declined in the context that the number of new accounts opened was continuously increasing sharply, even setting an impressive record.

According to data from the Vietnam Securities Depository (VSD), domestic investors opened 476,455 new securities accounts in May, double that of the previous month and a record number in history. 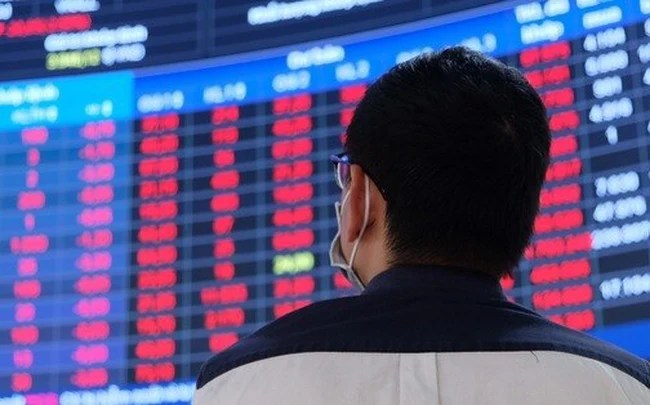 The number of new accounts opened by domestic investors in the past month was even 200,000 higher than the old peak reached in March. Individual investors continued to be the core when opening 476,332 new accounts next to them. 123 accounts come from institutional investors. Generally, in the first 5 months of the year, domestic investors opened a total of more than 1.38 million securities accounts, nearly equal to the figure for the whole year of 2021 (1.53 million accounts). The total number of domestic investor securities accounts by the end of April reached 5.6 million, accounting for nearly 5.7% of the population.

As of the end of the first quarter of 2022, customer deposit balances at securities companies are estimated at up to VND 100,000 billion, an increase of about VND 6,000 billion compared to the end of 2021. This is the amount of money that is available in the account. investors and had not yet disbursed at the end of March. So what’s really going on? 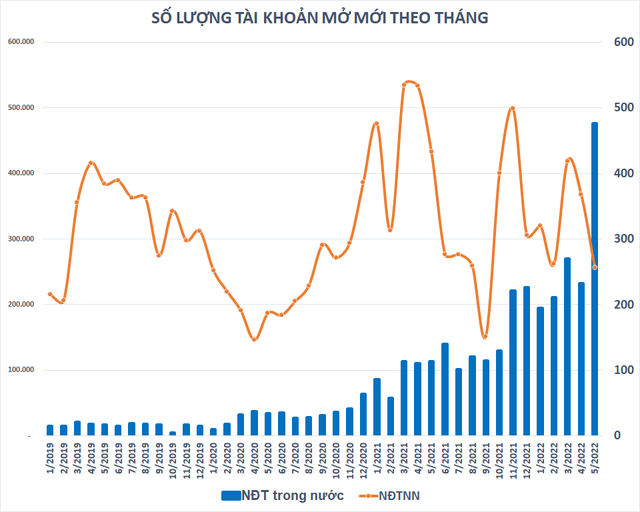 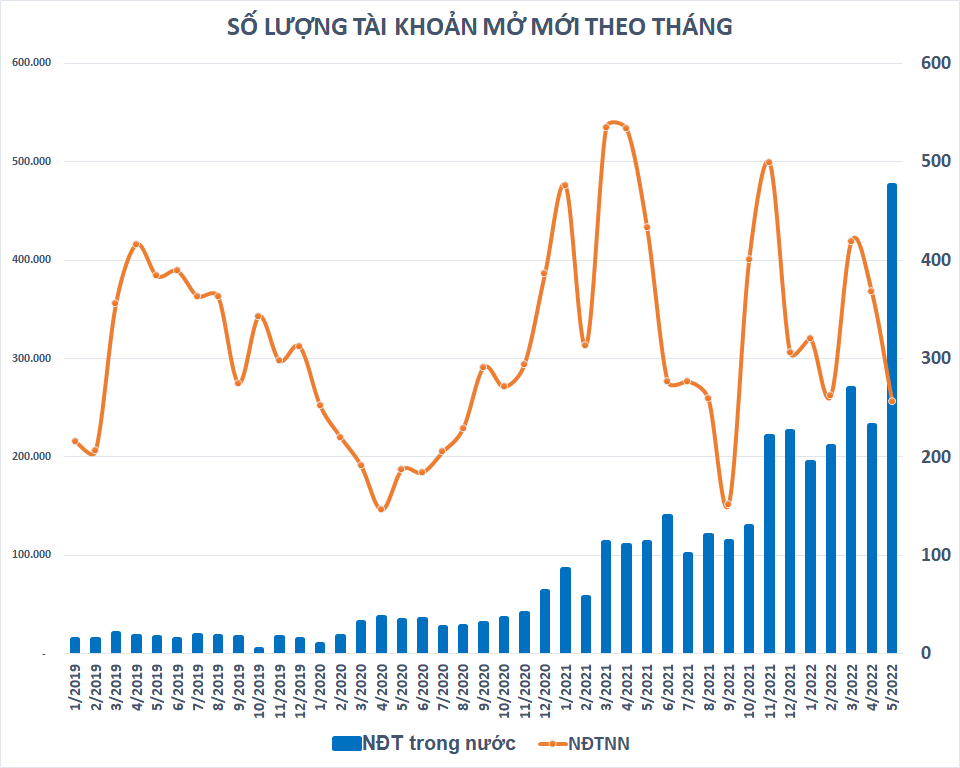 The number of new accounts opened continuously set a record

Joining the general flow, the solution to open an online account using eKYC (electronic customer identification) technology has been promoted by securities companies during the boom period of the stock market. Thanks to the convenience and speed, the initial results have been achieved with the number of new account openings increasing faster than the growth rate of the number of accounts of the Taiwan stock market in the period 1985 – 1990. However, it should be noted that the number of new accounts does not accurately reflect the level of people’s participation in securities because an investor can have many accounts at many securities companies, not to mention accounts in status. “passive”.

In terms of macro factors, on May 5, the US Federal Reserve (Fed) raised interest rates by 50 basis points, marking the strongest interest rate hike in more than 20 years. Domestically, interest rates have remained low throughout 2020 and 2021 to support the economy to overcome difficulties caused by the Covid-19 pandemic. Therefore, the pressure from the hawkish moves of the Fed more or less affected the cash flow into securities when the cheap money environment is no longer maintained.

The strong shaking of the stock indexes recently also made both investors holding stocks or those holding money to be apprehensive. For stock holders, investors are not really confident with the market’s uptrend because strong selling pressure is still standing to cool down the index’s gain. With the side holding the money, investors are also not really ready to participate, when the uptrend can turn into a “bull-trap” trap and push them into a state of “swinging to the top”.

READ MORE:  VIB reports VNĐ2.3 trillion in revenue for the first quarter of 2022

Positive outlook of the stock market

However, Vietnam’s inflation is still very stable under control, plus the clear roadmap to increase interest rates of the State Bank, the capital market or more specifically the stock market still possesses fertile room for growth. long-term sustainable development. In addition, the story of market upgrading is also expected to promote the return of foreign capital inflows in the future. Mr. Nguyen Quang Thuan, Chairman and CEO of FiinGroup, said that if Vietnam was upgraded to Emerging Markets, Vietnam could also receive tens or even hundreds of billions of dollars into the market.

A recent report of the SGI Capital analysis team assessed that the economy is still in the process of a solid recovery. Newly opened businesses continued to increase rapidly, retail spending increased sharply, industrial production recovered quickly, along with a continuous surplus of the State budget thanks to taxes.

According to SGI Capital, the stock market is always ahead of economic developments and may be reflecting concerns about inflation and the risk of monetary tightening at the highest level. When the signals of inflation risk subside, cash flow will return. Looking at the domestic market, we continue to be optimistic with the business results of many businesses along with the economic recovery momentum, especially those with a low comparison background during the period of severe Covid-19 impact in the country. 2nd and 3rd quarter of 2021. SGI Capital believes in the ability of businesses in the VN-Index to maintain profit growth of over 20% for 2022.

Vietnam’s solid macroeconomic fundamentals and long-term growth prospects are different, and policies to make the market more transparent are the necessary conditions for the capital market to develop effectively and attract large capital flows. keep looking.