More than 2 million Vietnamese users used to own NFT

According to Statista data, many countries in East Asia and Southeast Asia such as Vietnam, Thailand, and China have a large number of NFT users. 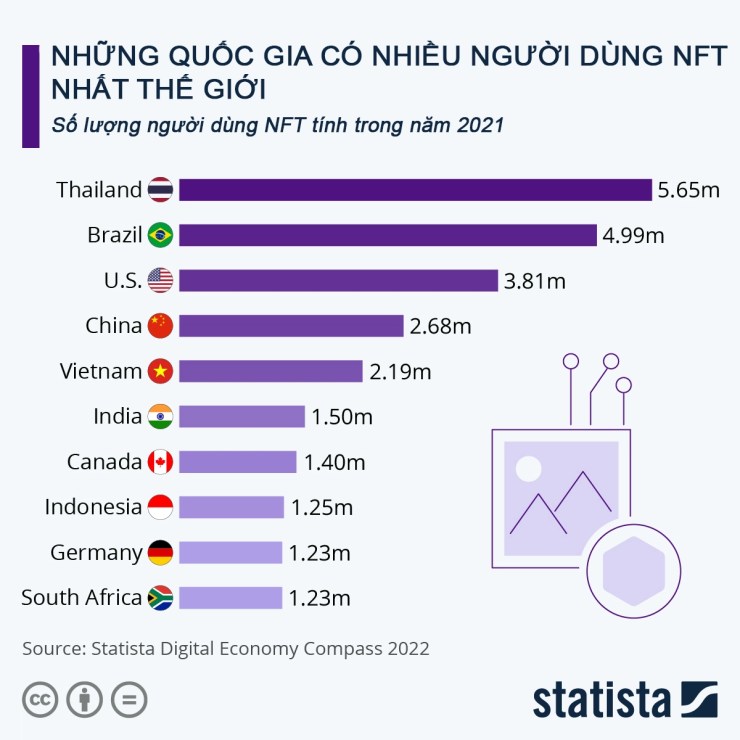 Vietnam is in the top 5 countries with the largest number of NFT users in the world. Photo: Zing Vietnameseization.

NFTs are non-fungible and exchangeable digital items. They can be pictures, songs, items or cards in the game. What makes an NFT item special and gives value is its uniqueness.

According to a report by analytics firm Chainalysis, by 2021, the global NFT market has grown to more than $41 billion, matching the size of the traditional art market, which stood at $50 billion by 2020.

However, the NFT market saw a sharp decline last month as sales fell to an average of 19,000 NFT/day, or 92% from a peak of 225,000 NFT/day in September 2021. In fact, not only the NFT, the cryptocurrency market has recently experienced many strong declines due to the tendency of users to avoid investing in risky assets.

Statista said the trend of NFT investment in Southeast Asia is related to the arrival of the Axie Infinity game developed by studio Sky Mavis. This is a project founded by a team of Vietnamese founders, led by Mr. Nguyen Thanh Trung.

In addition, the movement towards the digital technology market of artists on social media channels is also a factor promoting NFT trading activities. Besides, the wave of metaverse at the end of 2021 causes users to rush to buy virtual assets such as real estate.

However, financial experts warn against relying too much on NFT because there is still very little basis for valuation.

“NFTs do not have a fundamental economic return based on the business performance of companies or countries. Their payback structure is speculative and volatile. You can win inexplicably, but you can also lose everything,” said Chuin Ting Weber, CEO of consulting firm MoneyOwl.