One of the victims was shot in the head and died immediately during the latest rally in the second-largest city of Mandalay, according to Frontier Myanmar, a news and business magazine. Another was shot in the chest and died en route to a hospital.

Related: Protests break out in Myanmar in defiance of military coup despite attacks, internet cut

At least five people were injured by rubber bullets and were carried away in ambulances, according to an Associated Press journalist who witnessed the violence.

Some 500 police and soldiers descended on the area after dock workers joined the national civil disobedience movement, refusing to work until the military junta that seized power in a Feb. 1 coup reinstates the democratically elected government led by Aung San Suu Kyi.

Protesters and residents fled the neighborhood amid the violence and security forces chased after them, according to AP.

Protesters against the military’s seizure of power in Myanmar were back on the streets of cities and towns on Tuesday, a day after a general strike shuttered shops and brought huge numbers out to demonstrate.

In Mandalay, the country’s second-biggest city, a funeral was held for 37-year-old Thet Naing Win, one of two protesters shot dead by security forces on Saturday.

He and a teenage boy were killed when police and soldiers opened fire on a crowd that had gathered to support dock workers whom the authorities were trying to force to work. They have been on strike, as have many civil servants and state enterprise workers, as part of a nationwide civil obedience movement against the Feb. 1 military takeover.

Numbers were down from Monday’s massive crowds, but groups of demonstrators in Yangon, the country’s biggest city, assembled again at various venues on Tuesday for peaceful protests.

Protesters trained their ire on a new target Tuesday, gathering outside the Indonesian Embassy in response to a news report that Jakarta was proposing to its regional neighbors that they offer qualified support for the junta’s plan for a new election next year. The demonstrators demand that the results of last year’s election, won in a landslide by Aung San Suu Kyi’s National League for Democracy party, to be honored. 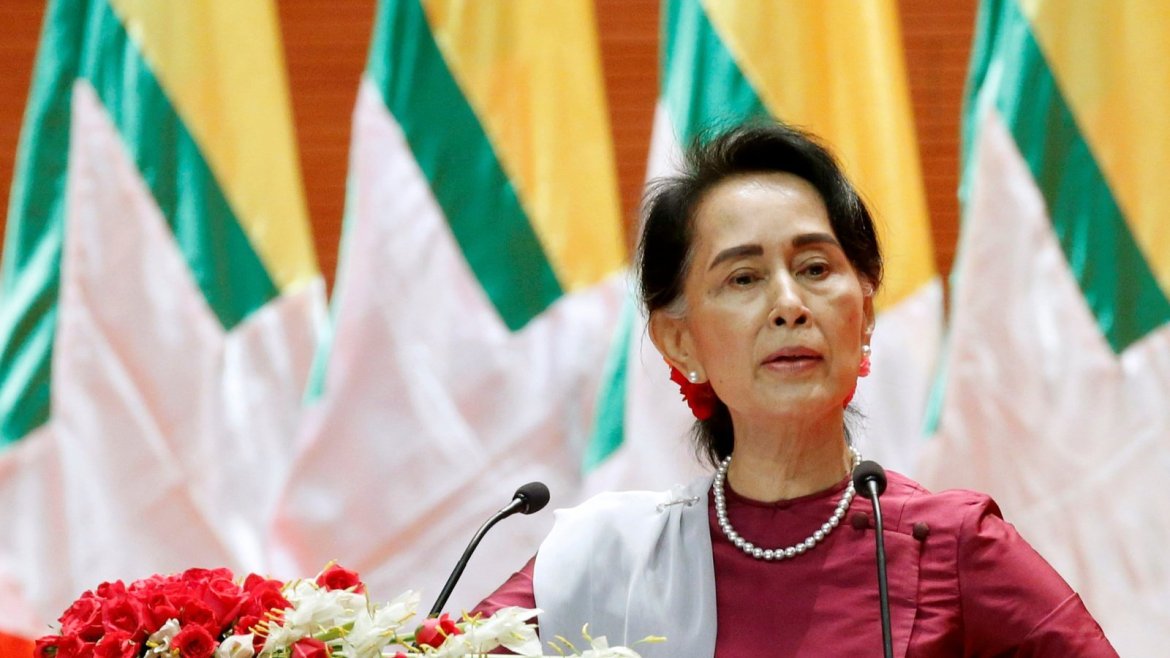 The protesters chanted slogans against the military coup and held banners, one of which read “Friend or Enemy. You choose, Indonesia.”

READ MORE:  Macron orders COVID-19 lockdown across all of France and Covid in Brazil ‘completely out of control’

“What I hope, as a citizen of Myanmar, is to stand with the truth. We can’t wait one year,” said one demonstrator, Han Ni.

The report by an international news agency, published Monday, triggered dismay among supporters of the protest movement. It said Indonesia was seeking to have fellow members of the Association of Southeast Asian Nations agree on an action plan to hold the junta to its promise to hold free and fair elections in a year’s time.

Indonesian Foreign Ministry spokesperson Teuku Faizasyah denied the report, saying Tuesday that it “is not Indonesia’s position at all to support a new election in Myanmar.” He said Indonesian Foreign Minister Retno Marsudi was gathering the views of fellow ASEAN members ahead of a special meeting it hopes will be held on the situation in Myanmar.

Myanmar’s military says it took power because last November’s election was marked by widespread voting irregularities, an assertion that was refuted by the state election commission, whose members have since been replaced by the ruling junta. The junta has said it will rule for a year under a state of emergency and then hold new polls.

Suu Kyi’s party would have been installed for a second five-year term, but the army blocked Parliament from convening and detained her, President Win Myint and other top members of her government.

There is continuing international concern over Myanmar, with foreign ministers from the Group of Seven nations on Tuesday issuing their second statement since the coup.

The group, consisting of Canada, France, Germany, Italy, Japan, the United Kingdom, the United States and the European Union, condemned violence committed by Myanmar’s security forces and demanded they act with restraint according to international standards for human rights.

“Anyone responding to peaceful protests with violence must be held to account,” they said.

The group also condemned restrictions on freedom of expression, including arrests and the blocking of internet access, and called for the release of Suu Kyi and her colleagues.

The United States and several Western governments have called for the junta to refrain from violence, release detainees and restore Suu Kyi’s government.

On Monday, the U.S. said it was imposing sanctions against more junta members because of the killing of peaceful protesters by security forces.

U.S. Secretary of State Antony Blinken said in a statement that the U.S. condemns the attacks on protesters and vowed to take further action if more violence occurs.

“We call on the military and police to cease all attacks on peaceful protesters, immediately release all those unjustly detained, stop attacks on and intimidation of journalists and activists, and restore the democratically elected government,” Blinken said.

Also Monday, European Union foreign ministers ordered a series of measures to be drawn up to target those responsible for the coup. They said the EU is ready “to adopt restrictive measures targeting those directly responsible” and keep all other options “under review.” Such sanctions usually involve a freeze on people’s assets and a ban on them traveling to Europe, AP reported.