On the morning of August 31, at the Presidential Palace, President Nguyen Xuan Phuc received Lotte Group Chairman, Mr. Shin Dong-bin, who is on a working visit to Vietnam.

Welcoming Mr. Shin Dong-bin, Chairman of Lotte Group to visit Vietnam on the occasion of Vietnam – Korea’s 30th anniversary of establishing diplomatic relations, the President was pleased to see the two countries’ strategic cooperation in various fields, especially investment and trade, have achieved many important achievements, political trust has been consolidated. Korean enterprises are leading in FDI investment in Vietnam with a total capital of 80 billion USD. With a turnover of 78 billion USD, Korea is the third largest trade cooperation country of Vietnam.

The President thanked Lotte Group for supporting Vietnam in COVID-19 prevention and control, of which the support amount was 3.7 billion VND. The Group has also supported programs to reduce prices of essential items, donate masks, and give gifts to Vietnamese workers. 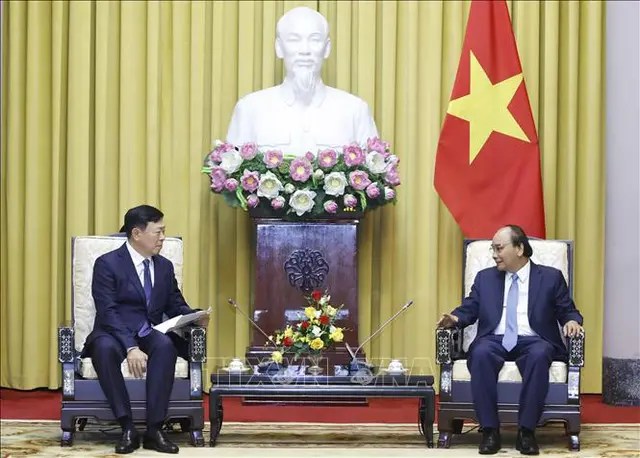 Agreeing with Lotte Chairman on investment orientation in Vietnam, including developing start-up ecosystems, creating many jobs, the President wished Lotte to continue promoting economic cooperation between the two countries, striving to soon bring bilateral turnover to 100 billion USD. Lotte’s projects contribute to meeting the growing needs of the Vietnamese people in the context of a rapidly growing middle class and to the needs of 200,000 Koreans living and working in Vietnam.

With the fact that in 2022, the two countries will celebrate the 30th anniversary of the establishment of diplomatic relations, which is also the year towards upgrading the relationship to a new height, opening a new era in the stronger and more comprehensive development of the relationship. The State President said that in order to achieve this goal, it must rely largely on the cooperation and active contributions of businesses of the two countries, including Lotte. The State President welcomed Lotte for investing nearly 5 billion USD in Vietnam and considered this to be Lotte’s third largest market after Korea and Japan and suggested Lotte continue to invest in many large projects in Vietnam. 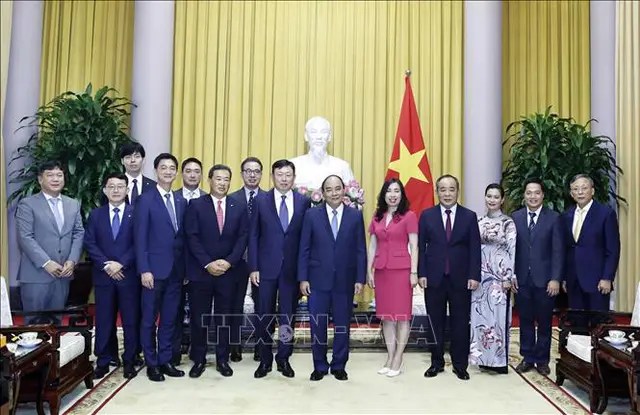 Sincerely thank the President for taking the time to meet, Mr. Shin Dong-bin, Chairman of Lotte Group said, The Group has invested in Vietnam since 1996 in many fields with a capital of 40 trillion VND, and currently has more than 20 thousand employees. Mr. Shin Dong-bin would like to thank the Government, ministries, branches and localities of Vietnam for actively supporting the Group over the past time. He said that the Group is also planning to invest in a number of projects in Hanoi, in which it wants to build a trade center to attract 10 million visitors per year. Lotte also promotes building a startup ecosystem to support Vietnamese youth, investing in start-ups in Vietnam.