Just created a new peak the day before, the world gold price dropped by nearly 100 USD

After the plunge of nearly 100 USD/ounce on March 10, how do experts forecast the gold price in the coming time?

Updated at the beginning of this afternoon, the world gold price was bought at 1,982 USD/Ounce and sold at 1,984 USD/Ounce. Since the latest peak, world gold has dropped by more than 80 USD/Ounce.

Despite the decline in gold, many experts and big banks still raise the outlook for this precious metal.

The bank has raised its gold price target to $2,500, said Jeff Currie, global head of commodity research at Goldman Sachs. Accordingly, the gold price can increase from 500 – 600 USD/Ounce from the current price. “The current backdrop is too great for gold prices,” said Mr. Currie. He also gave 3 reasons why gold can reach the above price.

The first reason that Mr. Currie gave is that the gold market is being supported by a huge demand. Mr. Currie said that, in the face of macro fluctuations such as inflation, recession and geopolitical tensions in the euro area, investors will often look to gold as a safe haven. Therefore, the demand for gold in the market is very large, Mr. Currie explained.

Central banks’ increased purchases of gold is the second argument made by Mr. Currie. Complementing his argument, Mr. Currie said that central banks buy gold for three main reasons: to build up reserves, to de-dollarize assets and finally to diversify their portfolios. investment item. This expert also forecast that this year, the demand to buy gold reserves of the central bank may increase by 750 tons and reach the highest level in history.

READ MORE:  Here’s why Vietnam is a jewel in terms of attracting global investment into its startup ecosystem

Citing central banks’ increasing hoard of gold, Goldman Sachs analyst said, “Given the current situation, Russia is trying to hoard Euro and Dollar as much as possible. However, , they can’t buy it directly in the international market, the only way they can do it right now is to buy gold.”

In a statement at the end of February, the Central Bank of Russia also announced the resumption of gold purchases after 2 years of maintaining flat reserves.

According to Mr. Currie, the two central banks in China and Turkey will have a need to buy gold to de-dollarize their assets.

“For the reason of portfolio diversification, we will have two central banks as representatives, Brazil and India”, Mr. Currie cited that central banks will increase gold purchases to diversify portfolios. assets held. 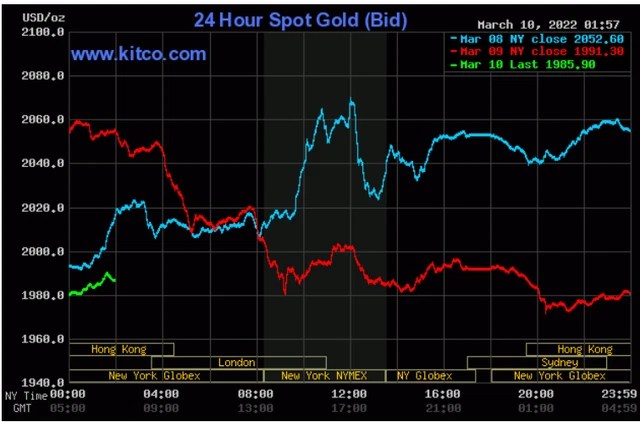 Gold price movement in the past 24 hours, source: Kitco

Citibank this morning also updated a new target price for gold. Accordingly, in the short term in the next 3 months, this bank thinks that the gold price will reach around 1,950 USD/Ounce, up 125 USD/Ounce compared to the previous forecast.

Regarding the outlook for the next 6-12 months, Citibank’s analysis team still maintains the view that the gold price will continue to decline. This group predicts that, in an unfavorable market scenario, the gold price may fluctuate at $1,750/Ounce.

Explaining the forecasts, the analysts said, “Although the market is somewhat less active due to the impact of the Fed’s rate hike, we still think that geopolitical tensions can still support the market. gold price support in the short term”.

A gold expert in Ho Chi Minh City said that the international gold price is being affected by information related to the oil and gas industry, “gold price is currently back to test the support level of 2,000 USD/Ounce due to the information. The UAE can increase oil supply.”

Assessing the upcoming international gold price outlook, this expert also said, “the uptrend can still be maintained if the two sides of Russia and Ukraine continue to conflict”.