The past few holidays have marked the return of destinations in Hoi An, My Son (Quang Nam) when the source of visitors from traditional markets such as Europe, Korea… have returned and are familiar presence in the ancient town, rural villages.

The places where the largest number of European tourists appear are the village area outside the ancient town of Hoi An and Cam Thanh coconut forest.

Mr. Truong Van Quy – director of Sabirama Hoi An Tourism Company – said that in the past few days, this business has received the most foreign tourists since the past two years. Most of these delegations from the US, Australia, and Korea… come to visit Hoi An for a long time. They went down to Cam Thanh coconut forest to ride a basket boat, participate in tours to make traditional Vietnamese dishes.

“Before the epidemic, we welcomed hundreds or even thousands of visitors every day, but in the past two years, we have hardly received any foreign nationalities. This is a source of customers who have to pay and use services suitable to their needs. On this occasion, they go in small groups, from 20-30 people, making tourists very excited, this is a signal that international tourists have returned to Hoi An”,  Mr. Quy said. 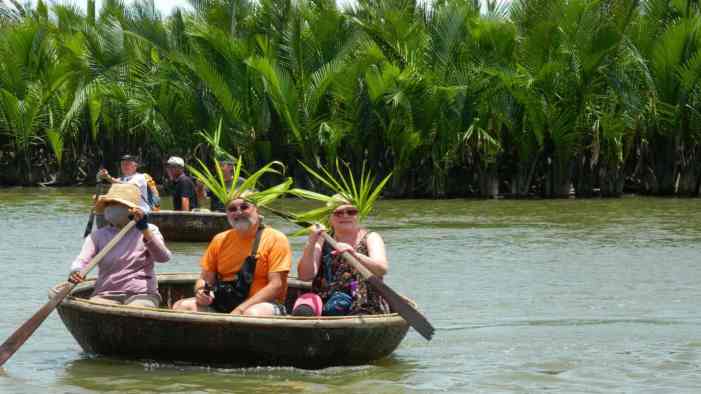 Mr. Tran Van Khoa – director of Jack Tran Tours Hoi An travel company – also said that European delegations have continuously contacted to book tours to the countryside and rivers in Hoi An in recent days.

“The US, Canada, the UK… are our traditional visitor markets. In the past two years, due to the impact of the epidemic, we really did not receive any tours. In the past few days, there have been a lot of tourists coming to the tour, they haven’t been to Hoi An for a long time, so when they come back, most of them are very excited,” said Mr. Khoa.

Not only the travel service companies but also the accommodation sector also recorded a very happy return from the source of traditional visitors. Hoi An and My Son are destinations where the traditional source of tourists is international tourists.

In the past few days, according to statistics, every day, over 10,000 visitors visit Hoi An ancient town, this number in My Son is also quite large. About 20% of guests booking rooms to stay at eco-resorts and villas in Hoi An are from Westerners. A representative of La Siesta Hoi An resort and spa Hoi An said that in April, this unit welcomed 4,000 guests, more than 20% of which were international guests.

Mr. Le Ngoc Thuan – director of An Bang Beach Festival and Events Company – said that in the past few holidays, the number of foreign tourists, mostly from European countries, came to eat and shop at An Bang beach restaurants in his system increased suddenly. “International visitors have come back a lot, I think in a few months Hoi An and My Son will be “covered” with foreign guests like the usual image a few years ago” – Mr. Thuan said.

In order to take care of international guests who accept to spend and stay, from April 29, Hoi An has banned villas, hotels, and resorts from using loudspeakers and high-powered sound. This partly keeps Hoi An peaceful, partly to retain customers in international markets such as the US, Europe…