Insider’s Story: After all the countries I visited, Vietnam still be number one for me in my heart

Vietnam was the first place Charlotte Lou visited in Asia back in 2016. After falling in love with the country, she decided to make it her home.

That summer, Charlotte backpacked for a month from HCM City to Hanoi.

Anyone following her Instagram account can see beautiful landscapes throughout Vietnam, while clips on her TikTok page are funny, with the young woman sharing her feelings and incidents when trying to speak Vietnamese.

Related: Insider’s story: How Vietnamese people are friendly and hospitable with strangers

What shines through social media is an energetic woman with a deep love for Vietnam and the Vietnamese people.

“It just clicked, like I had an epiphany, I just fell in love with Vietnam,” she told Việt Nam News. In the summer of 2017, she backpacked alone in Indonesia for a month and in 2018, again, she backpacked for three months in Thailand and Cambodia.

When she came back after her summer break, she knew she wanted to stay longer than three months. She then asked her boyfriend if he wanted to do something crazy – travel more, for even longer. They prepared and then in January 2019 they left Switzerland with their backpacks.

They went to the Philippines for one month but it didn’t go as planned, she didn’t feel the same connection and it wasn’t as awesome as she expected.

They decided to go to Vietnam.

“After all the countries I visited, Vietnam was still number one for me in my heart, so I asked him if he wanted to go and he agreed,” she recalled. “We arrived in Sai Gon, bought bikes and travelled from Vung Tau to Hanoi.”

READ MORE:  Trump acknowledges Biden will be next president in wake of Capitol chaos

“We drove for two months, visited so many beautiful places, and met so many incredible people, even back then when we couldn’t speak any Vietnamese, the people, the culture, the landscapes, everything was incredible… So, when we arrived in Hanoi, we talked, and decided that we would not leave.”

“I guess the biggest challenge, was for me to adapt to one specific detail. In Switzerland we’re known to be right on time, if you tell a friend, let’s meet at 1pm, it’s really 1pm, not 1.15pm. We’re very punctual.

“So every time I travel, whether it’s in Brazil to see my family or even in other countries in Europe, I need to relax and remember that people are often late, or just not as punctual as in Switzerland. In Vietnam, it’s the same thing, I regularly stress myself to be prompt and on time but then I remember that here, I can be late too; otherwise, I’ll be waiting,” she said.

Lou said she loves to hear her Vietnamese friend’s point of view on things, or about how people think about certain topics. 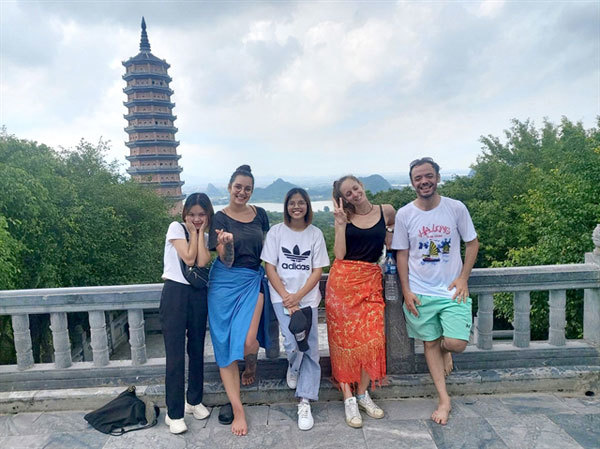 Charlotte Lou (second from left) with her friends during a trip to Bai Dinh Pagoda in Ninh Binh Province.

“Every country has its own culture, customs and manners and I really enjoy being able to understand more after every conversation,” she said.

She is interested in the history of the country, from Chinese oppression to the war with the US.

“It’s dark but so interesting and I see that the people are also really proud to have fought and won,” she said.

“Vietnam is very unique and I love how Vietnamese people are so proud to be Vietnamese, proud of the country but still love foreigners and are so welcoming.”

She was also impressed that the Vietnamese people are so willing to help. She shared one such experience in a video.

Her motorbike broke down on Hai Ba Trung Street at around 7pm. She went to a tea shop by the pavement and some men from the tea shop came to see her bike and tried their best to fix it.

“At first two men came, then three, then five men came to fix my bike,” she said. “They spent 30 minutes helping me. I intended to invite them for some beer but they refused.

“Hanoi is a big city but anytime I have trouble, there is always someone helping me, which is quite different from other big cities in Europe and America that I have been to. People in such cities don’t often help strangers like here. This only happens in Vietnam. This is one of the reasons I love the country so much.”

Also read: One in Ten expats in Vietnam have an annual income of over 250k USD

Lou said her boyfriend has a stable job in Hanoi, and has been with her for seven years. She also has a cat named Toosie.

“He’s a rescue, we brought him home two years ago after someone posted on Facebook that the cat was found trapped in a plastic box under the sun, covered in flees and bleeding,” she said.

Lou admitted she loves learning languages. Besides her mother tongues, which are French and Portuguese [her mother is Brazilian], she learned English, Spanish and Italian. 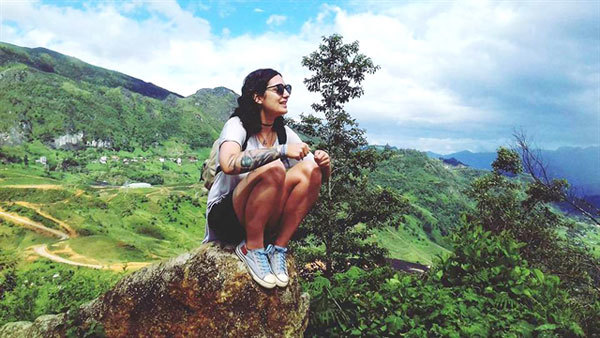 Though she speaks a little Vietnamese, Lou said she gets nervous when she has to speak sometimes.

“I’m afraid people will not understand me, or I won’t understand them or they think I’m a bit dumb for not understanding,” she said. “Vietnamese is hard and it’s easy to make a mistake.”

Lou made a TikTok clip on Vietnamese words that western people often mispronounce, including the words “mông” [bottom] for “món” [dish].

Having travelled throughout Vietnam, Lou finds it hard to say where she was most impressed.

“I remember being so amazed by the beauty of the landscapes when driving on the coast… it was breathtaking,” she said. “And I remember once, me and some friends we slept on the beach, in hammocks, and during the night we saw a family of pigs on the beach, it was really unexpected and beautiful.”

Lou said she and her boyfriend were a bit stressed when the pandemic started and they didn’t know what to do.

“I remember calling my dad, I told him about my concerns.”

He told her to stay if she feels happier and safer in Vietnam.

“I’m so proud to be here, I know I didn’t do anything except from staying at home but seriously, Vietnam handled COVID-19 better than most other countries.

“We were ok for so long, my friends back home were in and out of lockdown for ages and we were here… chilling. The last lockdown was obviously tough but well… nothing compared to Europe,” she said.