Inflation in Vietnam and Indonesia this year are expected to accelerate from last year by the most in Asia as global price pressures from supply chains and commodities prices continue to bleed into their economies.

The latest Bloomberg economist survey of consumer price forecasts show that Vietnam’s inflation will likely accelerate by 1.4 percentage points to 3.45% in 2022. Indonesia and China are expected to follow suit with headline inflation seen rising by at least 120 basis points.

Related: There are many driving forces for the economic growth of Vietnam in 2022

“Vietnam, Indonesia and China are forecast to see higher inflation in 2022 due to base effects which saw subdued inflation in 2021,” said Khoon Goh, head of Asia research in ANZ Banking Group in Singapore. “It is in part playing catch up as global inflation pressures feed through into higher prices this year.” 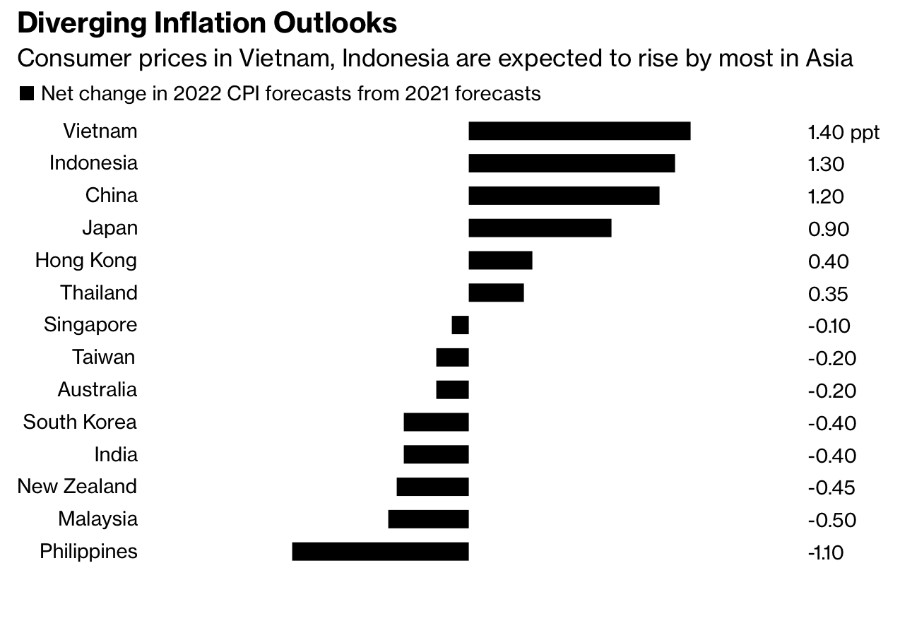 Source: Bloomberg surveys
Note: Comparisons exclude economies with annual GDP below $100 billion as of 2020. Pakistan was excluded due to insufficient consensus estimates. India’s forecast is based on fiscal years ending March.

Global central banks are set to take divergent interest-rate paths in 2022, with some intensifying their battle against inflation and others taking a more gradual approach aimed at bolstering economic growth.

On the other end of the spectrum, Philippines will likely see inflation easing the most — by 1.1 percentage points — to 3.2% in 2022, as eight of the 14 economies surveyed are forecast to see slowing growth in consumer prices.

“What we will also look out for is to what extent do actual inflation rates this year deviate from projections,” said Bernard Aw, head of Asia-Pacific economics at Coface in Singapore. “One of the key concerns for 2022 is the expectations of greater inflationary pressures, at least for the first half, due to ongoing supply strains.”

In terms of outright inflation rates, India is expected to lead the region at 5% growth, according to the survey, while Japan is forecast the slowest at 0.7%.