Japan and Singapore have the world’s most powerful passports, the Henley Passport Index showed. These passports holders are able to enter 192 countries without a visa.

Some passports afford their bearers more freedom than others. In 2021, Japan and Singapore were named the countries with the world’s most powerful passports by the Henley Passport Index. Holders of these passports have the unbeatable luxury of being able to enter 192 countries without applying for and receiving a visa beforehand. South Korea (not pictured) and Germany follow with visa-free travel to 190 jurisdictions. 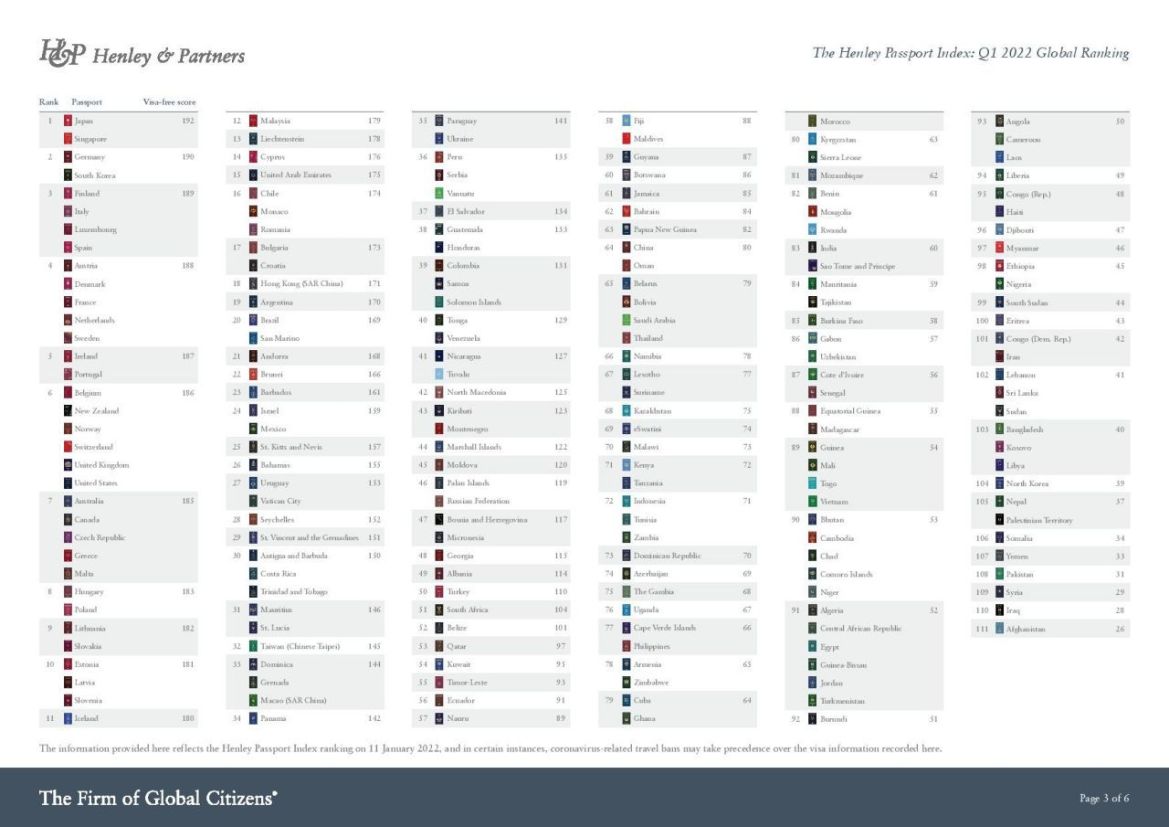 Even though the United States is further down the ranking, the American passport still yields considerable power. U.S. passport holders can travel to 185 countries without major restrictions. That’s a level of freedom also enjoyed by citizens in Czechia, Greece, Malta, Norway and the United Kingdom. At the other end of the scale though, the situation is very different. For passport holders in Afghanistan, Iraq and Syria for example, the world is very much not their proverbial oyster. The Afghanistan passport wields the least power in the ranking, with just 26 destinations possible visa-free. As this infographic shows, the situation is similar for Iraq (28) and Syria (29).

The Henley Passport Index is the original, authoritative ranking of all the world’s passports according to the number of destinations their holders can access without a prior visa. The index is based on exclusive data from the International Air Transport Association (IATA) – the largest, most accurate travel information database – and enhanced by Henley & Partners’ research team.

Covid-19 has permanently altered travel. Flying is becoming a luxury again, as tests, vaccine certification, and at times mandatory quarantines, must be factored into each journey. Our nationalities and countries of residence dictate access to approved vaccines, while the lack of a globally recognized vaccine passport restricts mobility. In addition to less travel freedom, those on the wrong side of the global mobility divide face diminishing access to education, business opportunities, and medical services.

Travel freedom has generally expanded significantly since the first Henley Passport Index was published 17 years ago. In 2006, the global average number of countries that could be visited without having to obtain a visa in advance was 57. In 2022, the average has risen to 107. But this apparent progress is masking a growing divide in mobility — and the resulting access to opportunities — between citizens in the wealthy global north and those in the lower-income global south, which includes many fragile states. Japanese, Swedish, and US passport holders can visit more than 180 destinations without a visa, whereas citizens of Angola, Cameroon, and Laos can visit only about 50.