The cyclos remains a popular tourist attraction not only in Hanoi capital but also in others such as Hoi An town in Quang Nam province and Hue city in Thua Thien – Hue province. Cyclos touring is the best way to get up close and personal with the vibrant life in Vietnam’s big cities.

According to Vietnam News Agency, cyclo is a three-wheel bicycle taxi that appeared in Vietnam in the early 20th century. A double seat is supported by the two front wheels with the driver sitting behind.

Cyclo transport was very popular until the early 1990s’ as it could carry two people plus goods. It was relatively cost-effective through Vietnam’s narrow streets and alleyways. As people needed to travel further and faster motorbikes became widespread, more locals stopped using cyclo and instead they became a good choice for tourists.

It feels safe in the busy traffic of Hanoi and Ho Chi Minh City and is much better for the environment than motorbikes or taxis. For these reasons, it is now very popular with travelers to explore Vietnam by cyclos.

A History of Cyclos in Vietnam 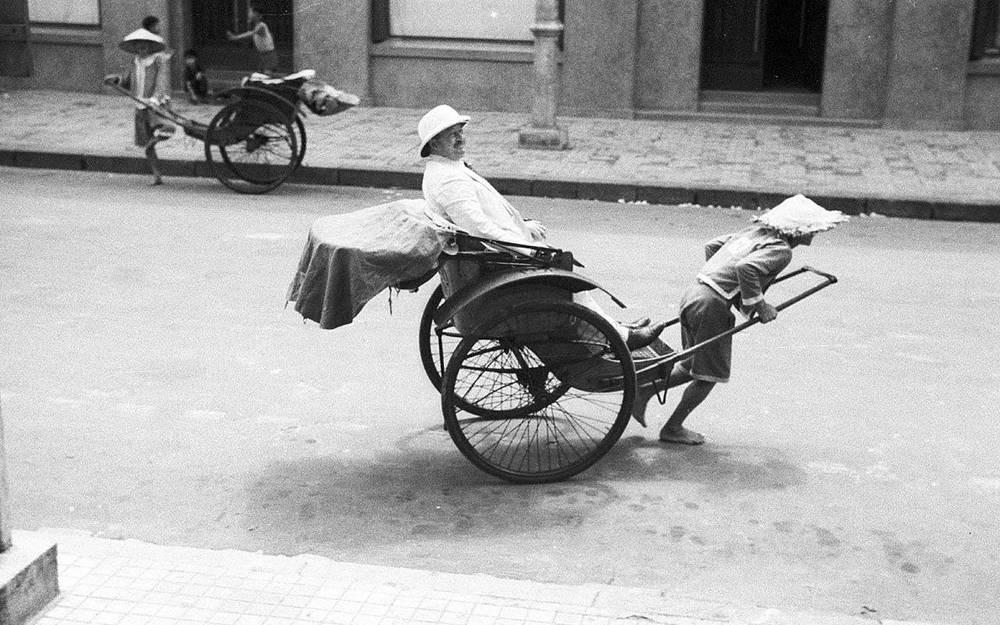 A foreign man traveling in a rickshaw in Vietnam capital city of Hanoi in 1941. File photo

Cyclos once dominated the streets in Vietnam, but now they’re all clustered around touristy areas, filled with foreigners in big tour groups. From near ubiquity to the edge of extinction, here’s the fascinating history of the cyclos in Vietnam.

Before the cyclos arrived in Vietnam, there was the rickshaw, a harsh and cruel means of transportation, which even the French authorities found to be inhumane. So, in the early 1930s, the French Public Works Ministry began trials on three-wheeled replacements, showcasing their new designs in Paris with high publicity shows that featured Tour de France winners in the Bois de Boulogne. Two years after those first prototypes, a man named Pierre Coupeaud designed and built his own version to bring to French Indochina.

Pierre Coupeaud was in an ideal position at the time. He’d been living in Indochina since the early 1920s and owned the “Établissements Pierre Coupeaud et Cie” – a bicycle company in Phnom Penh. After he returned to Cambodia with his prototype, Pierre Coupeaud received a contract from the local government to build a fleet of his new “vélo-pousse”, as the cyclo was called back then. He tried to do the same in Saigon, but the authorities there weren’t interested, stating that they found this new invention to be too revolutionary. That’s when he had a brilliant marketing idea: a time trial.