These vehicles are equipped with laptops and other necessary devices and furniture, and locals can step into them and complete the procedures. The vehicles aim to get 300 applications a day each.

Speaking at a press conference on March 18, Major Huỳnh Thị Thu Trang, deputy head of the division for administrative management of social order, said the city was one of 10 provinces and cities where the Ministry of Public Security wants to finish issuance by April 30. They are expected to issue 4.2 million cards.

People given priority include those aged more than 14 who have never been issued an ID card or are still using the old nine-digit card, and others with expired or lost 12-digit cards or seeking to change personal information.

The city police are working from 7am to 10pm every day to complete the task.

After July 1 they will continue to issue chip cards to others, first to people with a permanent residence book in the city and then to those with a temporary residence book.

To avoid crowding at police stations amid the COVID-19 pandemic, the police has set appointment times for people in the priority groups and informed them. 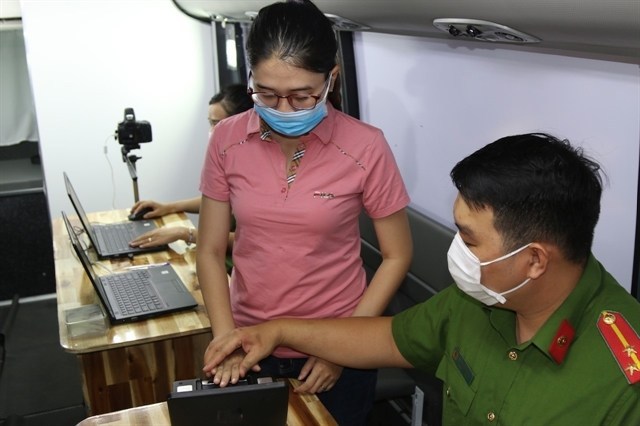 A HCM City woman does procedures to get a chip-based identity card on March 18 aboard one of the two police vehicles to go around Bình Chánh District and Linh Xuân Ward in Thủ Đức City. VNA/VNS.Photo Xuân Tình

Trang said the ID cards with electronic chips are very secure and difficult to be forged, and integrate a lot of information required for 22 different administrative tasks.

READ MORE:  Here’s how the expat in Vietnam helps people in need during the pandemic

After July 1 the ministry would share this data with other government agencies so that people would not need to carry a variety of documents when they want to complete administrative procedures, she said.

The police clarified two things: the chip in the card does not track people’s location and personal information could not be stolen if someone loses their card.

Major General Trần Đức Tài, deputy director of the city police, said the project to create a national population and citizen identification database would help streamline administrative procedures to serve the public better as part of the Government’s efforts to shift from paper-based to electronic document management.

According to the ministry, 50 million chip cards will be issued by July 1.

This article was originally published on Vietnamnews