GameStop Wraps Up Worst Week Ever, Leaving us$18 Billion Hole. Here’s why!

A month ago, GameStop was a name that, for many of us, sparked exasperating memories: it was a US store that would give you a few dollars for a barely-used video game that you didn’t want. A few days later you would see it on the shelves at five times the price.

Even with Friday’s bounce, GameStop Corp. wrapped up its worst week on record as a stunning reversal of fortune wiped out $18 billion from the video-game retailer’s stock-market value.

The stock fell 80% in the last five days, its worst weekly performance on record, to $63.77 in New York. The 19% gain on Friday after Robinhood Markets removed buying limits still left it far below last week’s high of $483 as retail trader demand and excitement across platforms like Reddit simmered.

GameStop’s market value slipped to $4.4 billion, a far cry from the $33.7 billion value it hit on on Jan. 28 when it briefly became the largest company in the Russell 2000 Index. AMC Entertainment Holdings Inc., which also had limits removed on trading, edged lower in Friday’s session and capped off its worst week on record with a 48% drop.

“The saga isn’t over for GameStop and the other stocks making headlines in recent weeks, but it is likely winding down,” said Craig Birk, chief investment officer at Personal Capital.“Bigger picture, the army of retail day traders will simply move on to the next thing.” 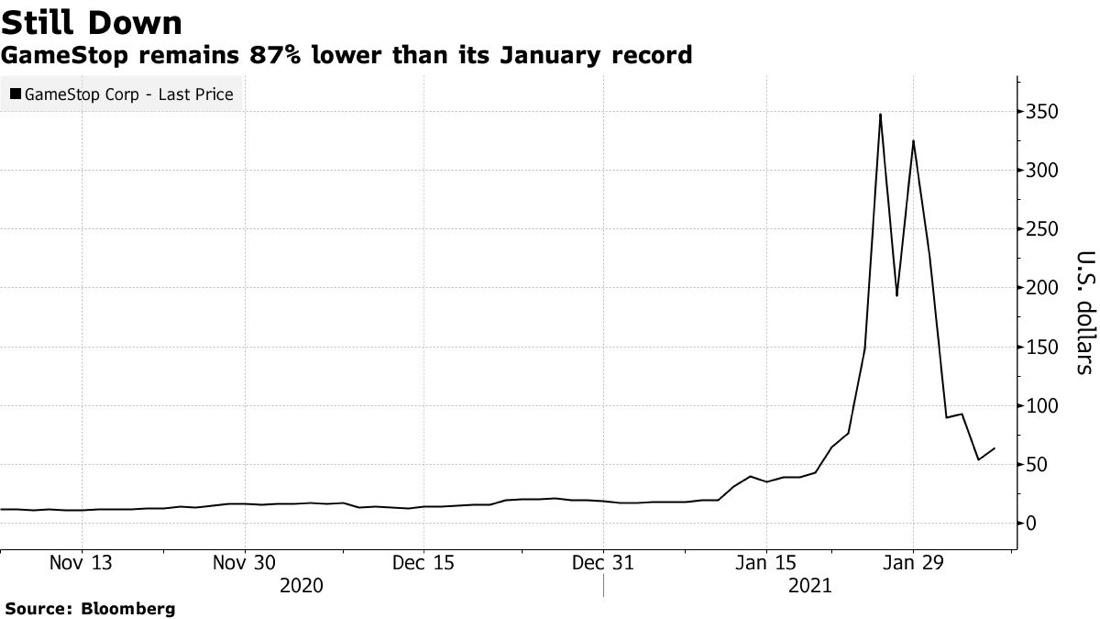 Robinhood announced that it would remove buying limits in an update on the trading platform’s support page a day after it loosened restrictions on purchases of the two stocks. Both had skyrocketed since late January as day traders who populate Reddit’s WallStreetBets forum sought to fend off short-sellers.

GameStop’s volatile session came as trading volume roared back for the busiest session since Jan. 27. With almost 80 million shares swapping hands, the rate of buying and selling was higher than what’s been seen over the past week. The stock continued to edge higher in postmarket trading, rising 1.8% at 5:20 p.m. New York time.

“Since certain brokerage firms announced yesterday that they lifted all trading restrictions, you may again see some buyers entering the market,” said Amy Kong, chief investment officer of Barrett Asset Management. “It is hard to assess if this saga is over, and the energy could very well resurge through another stock.”

While GameStop has shed $29.2 billion in value since its peak, the stock is still up more than 200% this year. AMC suffered a similar fate after falling 66% from last week’s high as retail traders flocked to other corners of the stock market, such as small drug developers.

Robinhood’s temporary restrictions on the Reddit group’s favorite stocks last week triggered an outcry among retail traders who said the brokerage had sided with hedge funds and institutional money. In order to shore up its capital amid the trading frenzy, the trading app operator has had to borrow or raise billions of dollars.

READ MORE:  China’s ban on crypto transactions sent the price of bitcoin lower, but the moved was relatively small

Short interest for GameStop fell just below 50% from a high of 140%, according to data from S3 Partners. The receding level of bets against the company and similar peers had been a key factor in the stocks’ roller-coaster moves over recent weeks, but could signal a breather before the next bout of mayhem.

“The short interest in GameStop and others created a rare situation of extreme volatility,” said Birk. “We may not see anything that dramatic again for a while, but price moves in whatever is trending will likely remain elevated.”

Limits on trading and the quick declines for the likes of GameStop and Express led retail investors to snap up biotechnology companies like Cassava Sciences Inc. The small drug developer has boomed 557% this year to become one of the top stocks in the Nasdaq Composite Index. Cassava fell 29% on Friday.

By Bailey Lipschultz — With assistance by Paul Jarvis, and Abhishek Vishnoi @ Bloomberg