From a poor village across the river, Thu Duc became the city with the 3rd highest GRDP in Vietnam

After nearly 2 years of establishment, Thu Duc city has made a big change in urban appearance and is a provincial city with the highest GDP in the country.

On January 1, 2021, Thu Duc City (under Ho Chi Minh City) was officially established on the basis of merging the entire natural area and population of 3 districts: District 2, District 9 and Thu Duc District. This young city has an area of ​​more than 211 km2 (equivalent to 10% of the area of ​​Ho Chi Minh City), a population of about one million people. According to information from the Ministry of Home Affairs, before Thu Duc City was established, in 2019, Thu Duc District, District 2 and District 9 contributed 1/3 of the total product in the area of ​​Ho Chi Minh City, equivalent to about 7% gross domestic product of the country. 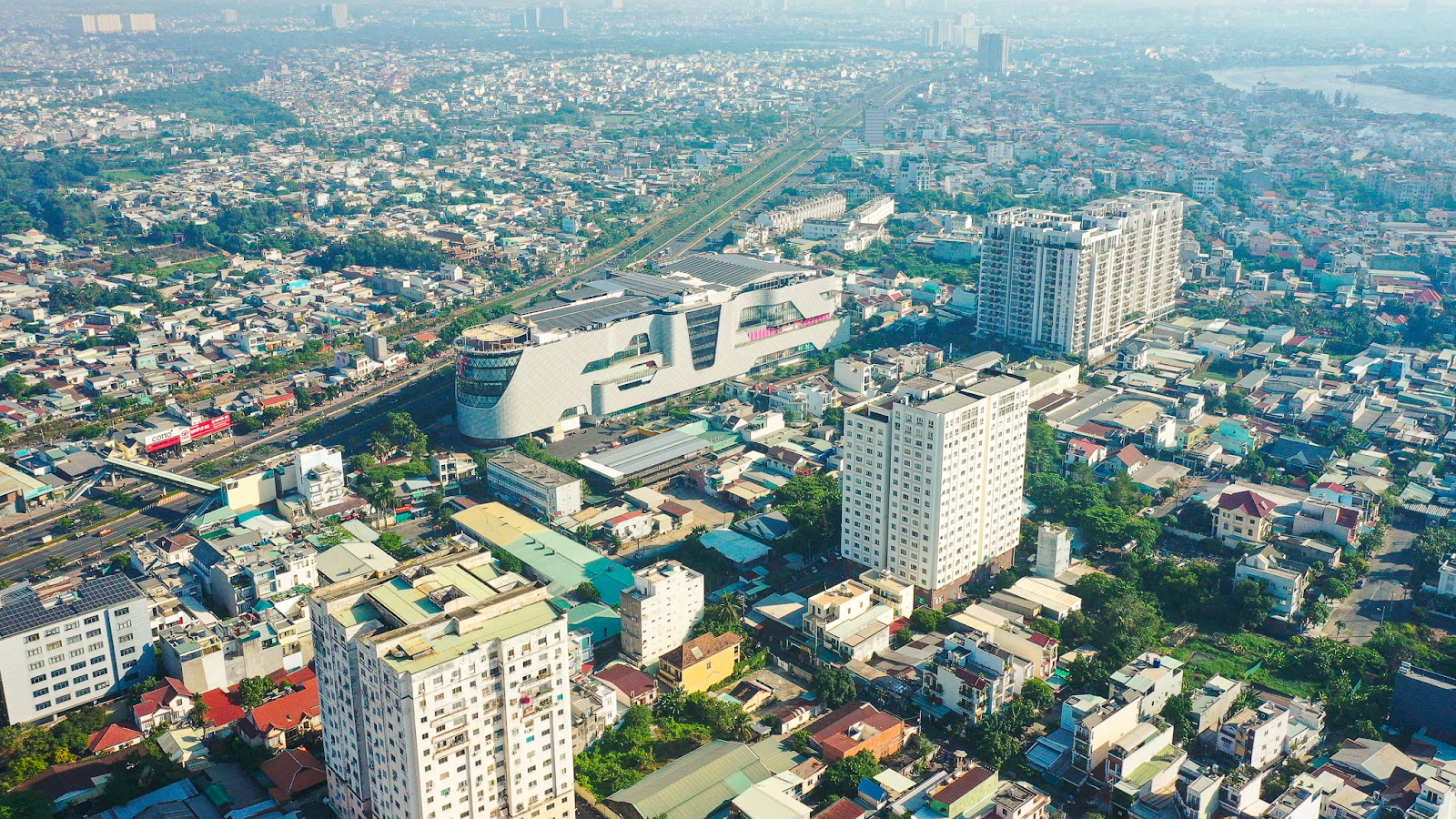 Up to now, there has been no official announcement about the city’s GRDP (gross domestic product). However, according to the market report of batdongsan website, as of May 31, 2021, Thu Duc’s GRDP is estimated at 452.7 trillion VND. This number is only behind Ho Chi Minh City and Hanoi. Meanwhile, the GRDP per capita of Thu Duc City is estimated at 18,997 USD, much higher than the GRDP per capita of the whole country. Pictured is the area along Pham Van Dong street. 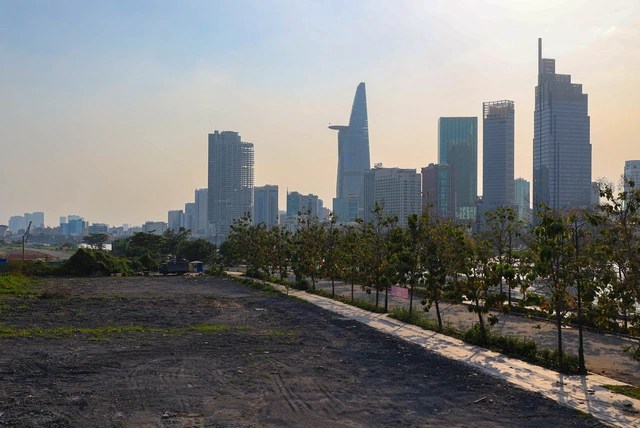 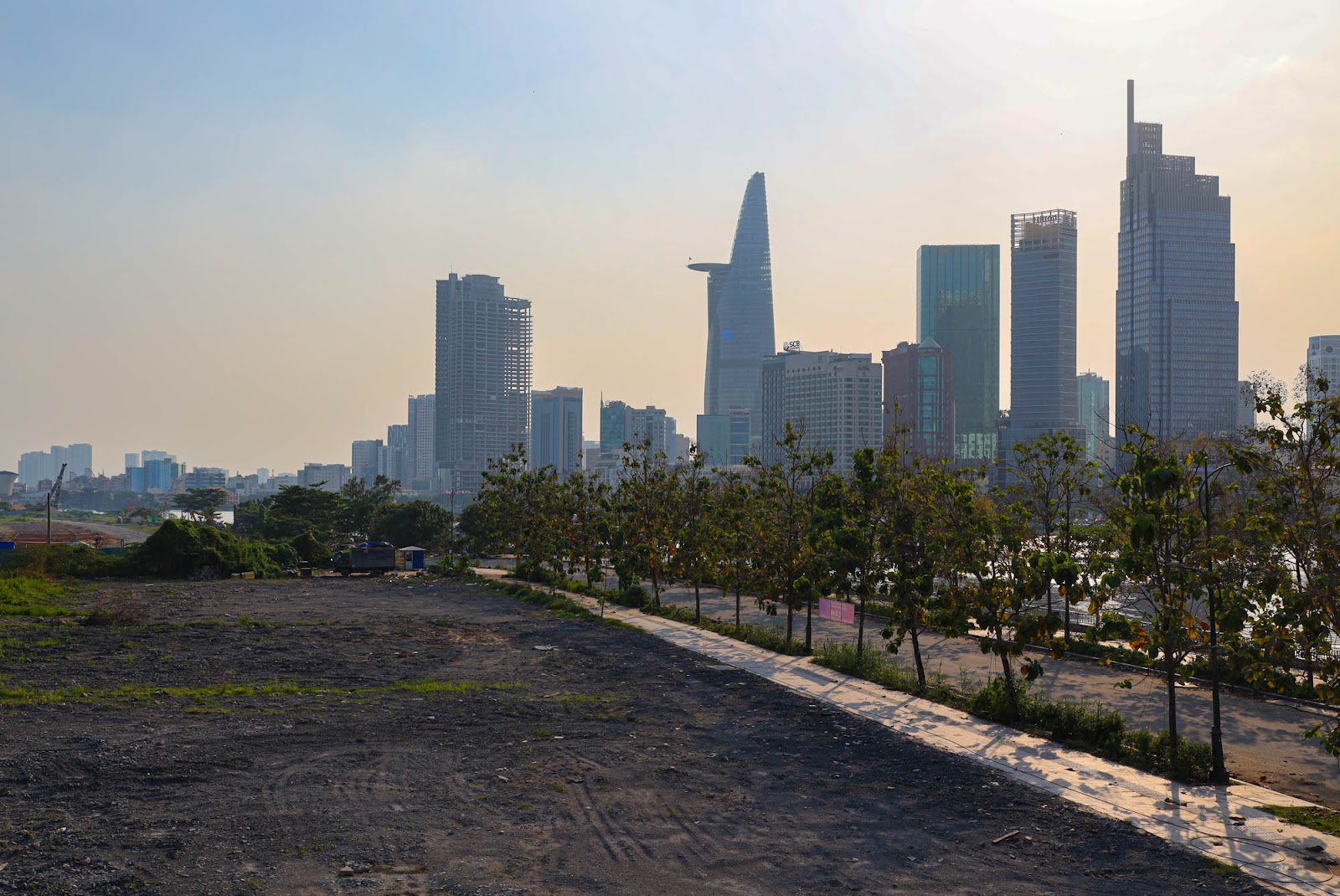 15 years ago, the area of ​​​​Thu Duc city today is a “poor house” across the Saigon River with land cleared for construction, muddy fields, rice fields in contrast to the area in District 1, District 4 sparkling lights. 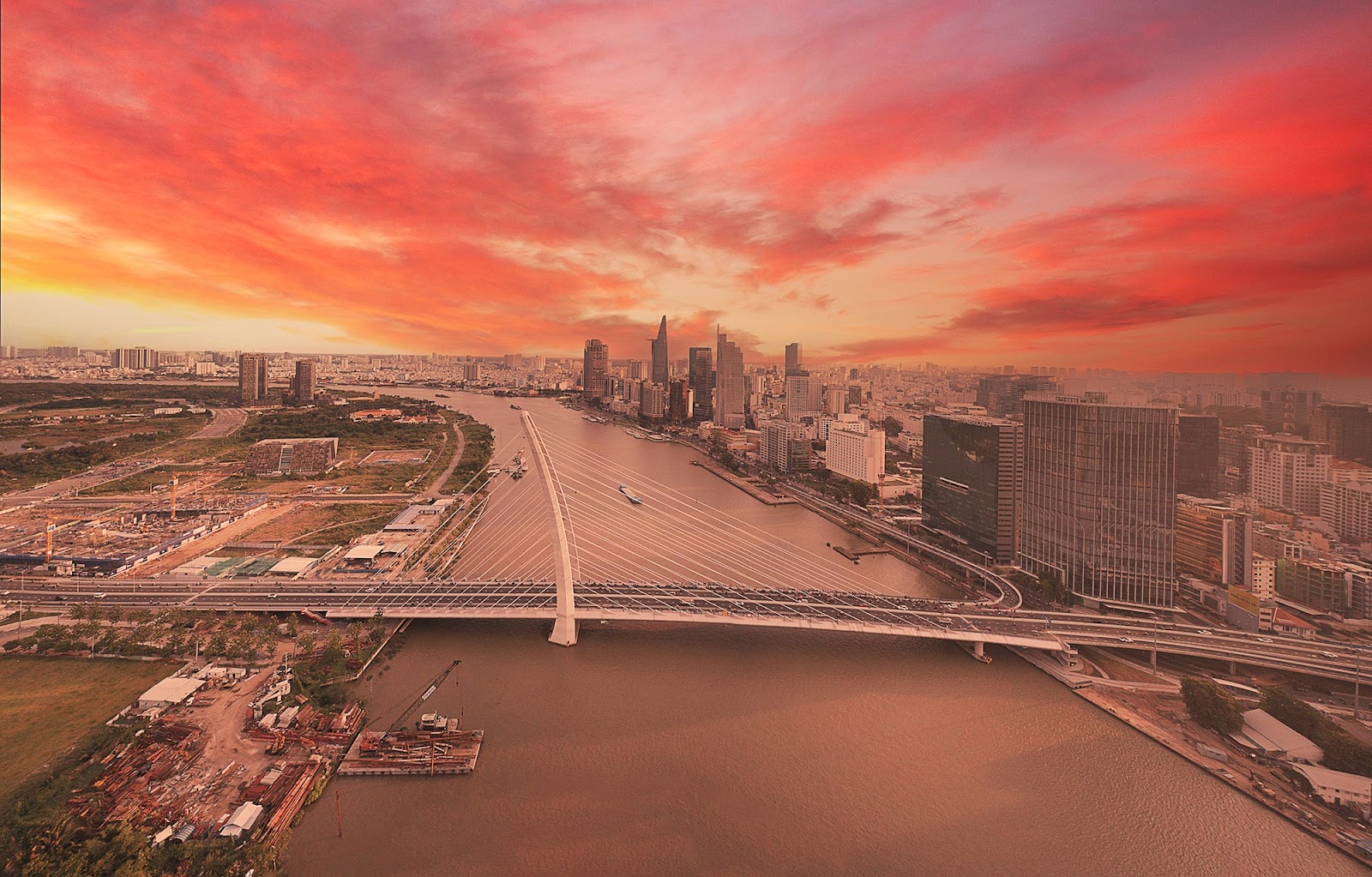 In turn, infrastructure projects and traffic works were built, leading to the development and gradual change of the appearance of this place. Specifically, it can be mentioned that the completion of works such as Thu Thiem tunnel (2011), Thu Thiem bridge (2020) and Ba Son bridge (in 2022). 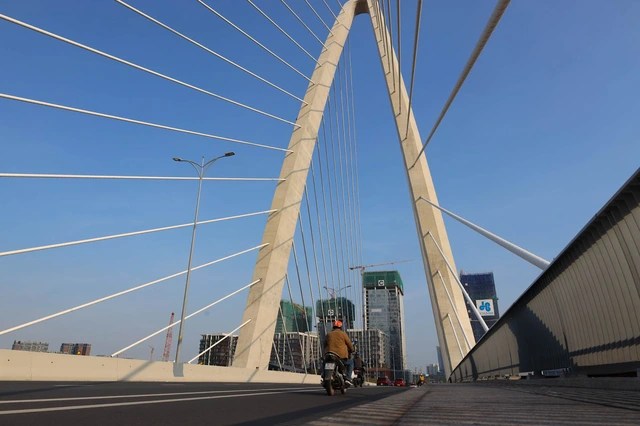 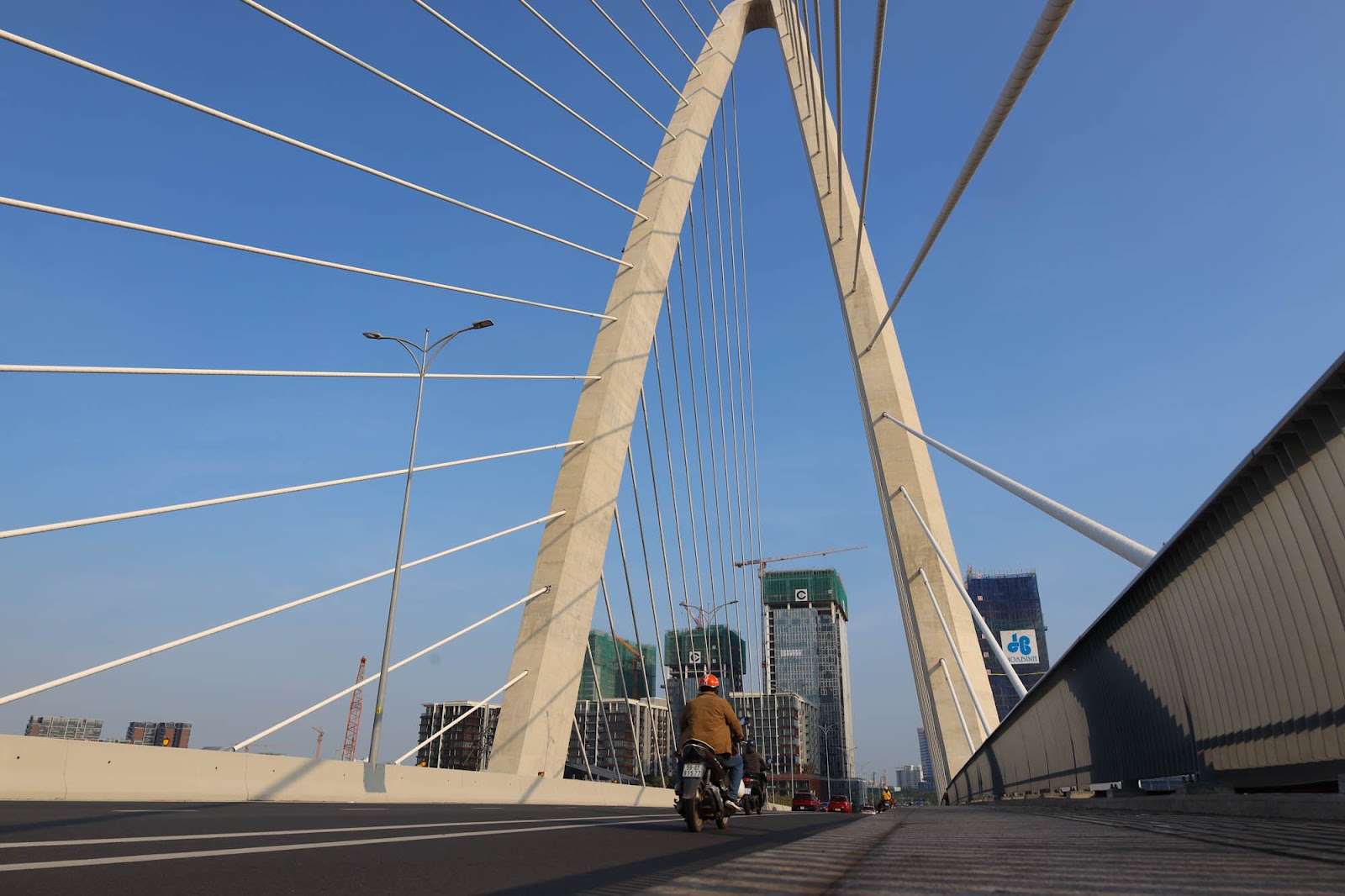 With a total investment of more than 3,000 billion, Ba Son Bridge (Thu Thiem 2), spanning the Saigon River, was inaugurated in April after 7 years of construction. The bridge has 6 lanes and is nearly 1.5 km long. This is an important traffic project, helping to complete the link between the East and District 1, promoting the development of Thu Thiem new urban area. 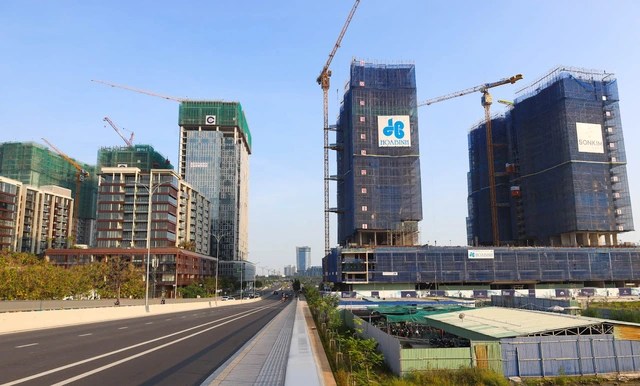 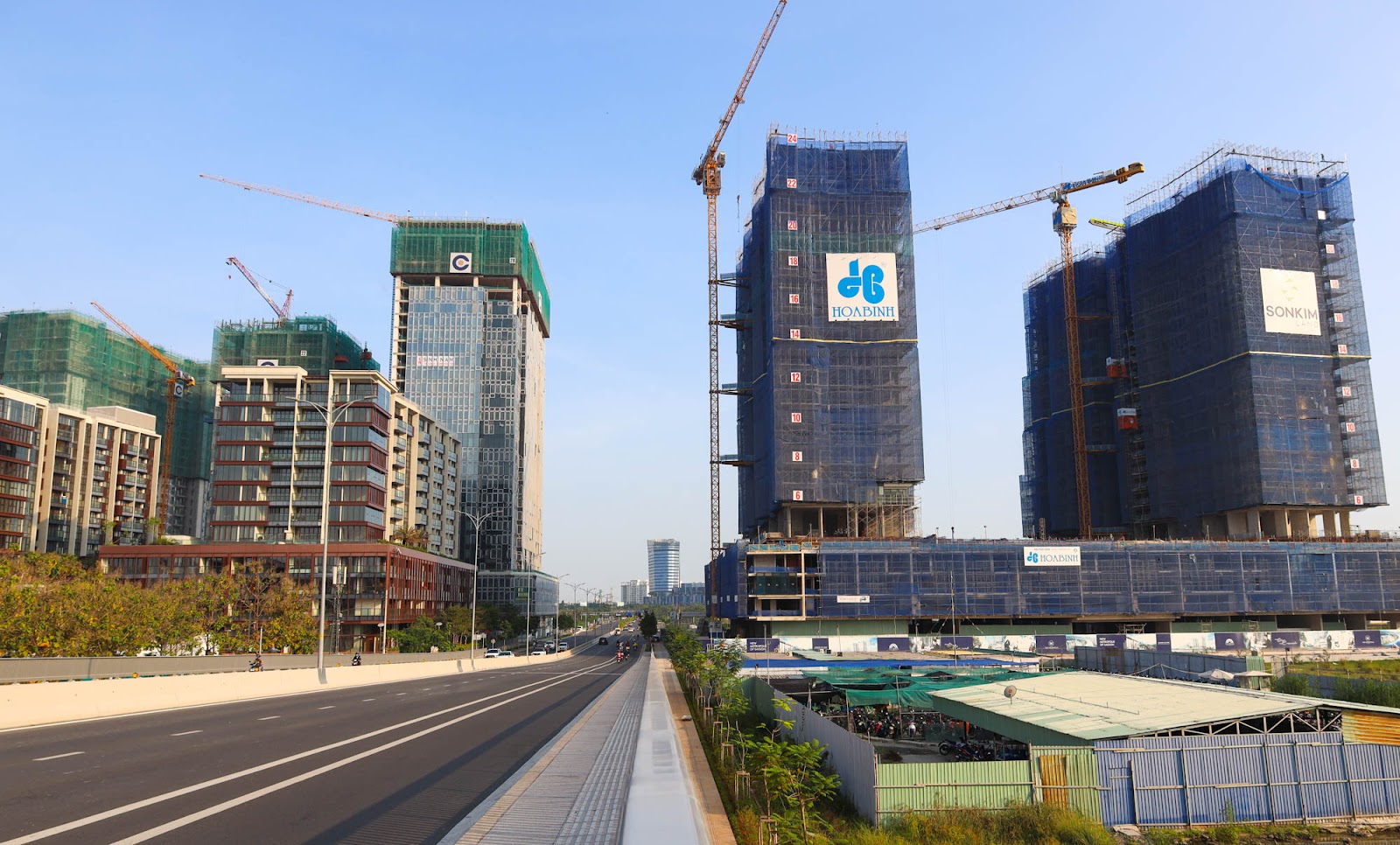 Since Ba Son Bridge was inaugurated, many apartment projects in Thu Thiem urban area have doubled or even tripled in price compared to the time of sale. Most of the projects around the bridge are in the luxury and super luxury segments. 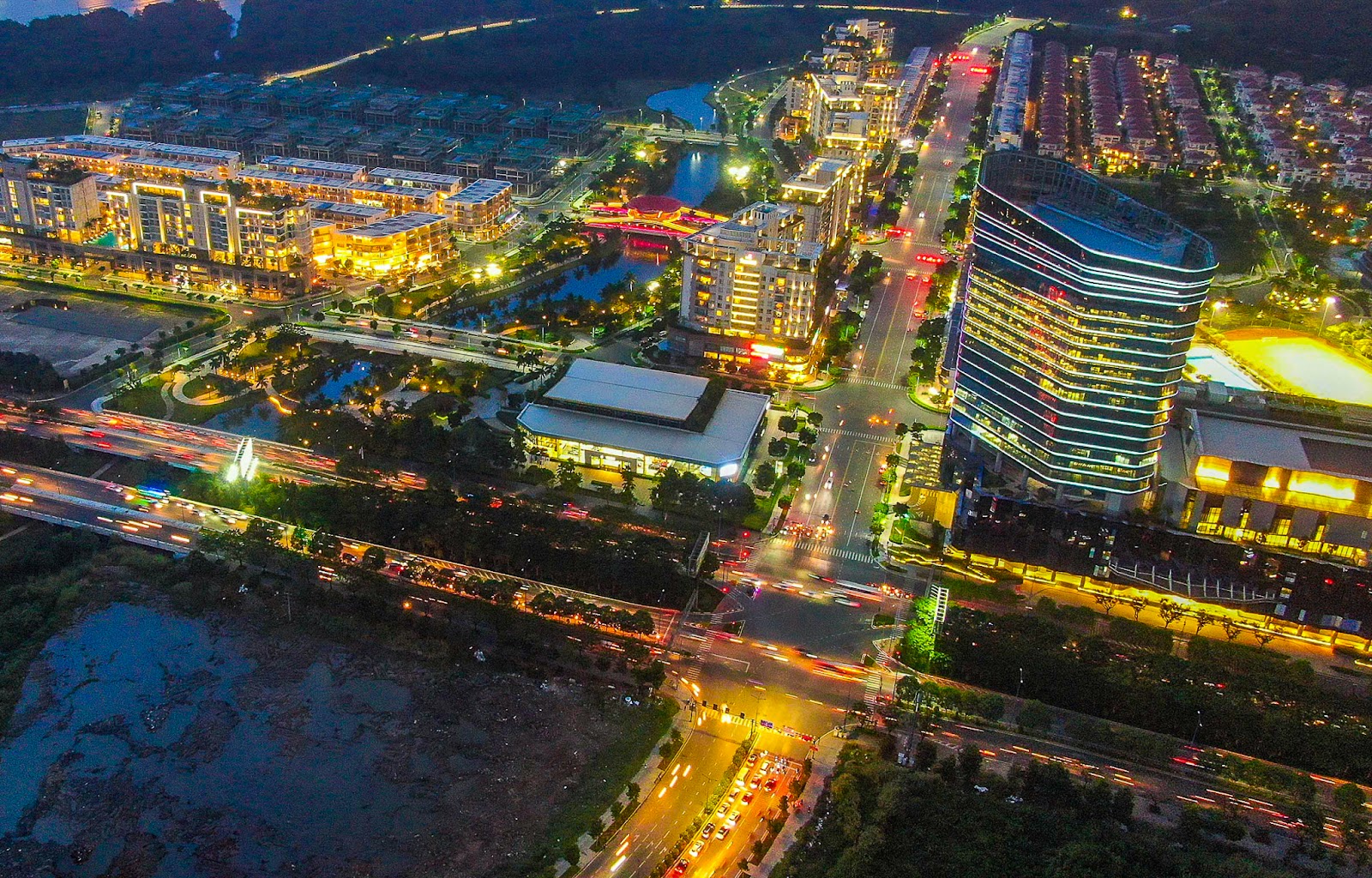 To develop effectively, Thu Duc city is planned with 6 key functional areas (Thu Thiem, Rach Chiec, Truong Tho, Tam Da, National University and High-Tech Park). A series of infrastructure-transport projects are also promoted to connect these 6 areas with each other and with neighboring regions. In the photo is Mai Chi Tho Boulevard with a total investment of 13,400 billion VND, running along Thu Thiem new urban area, acting as a radial axis between District 1, Thu Duc City and Ho Chi Minh City – Long Thanh – Dau Giay. 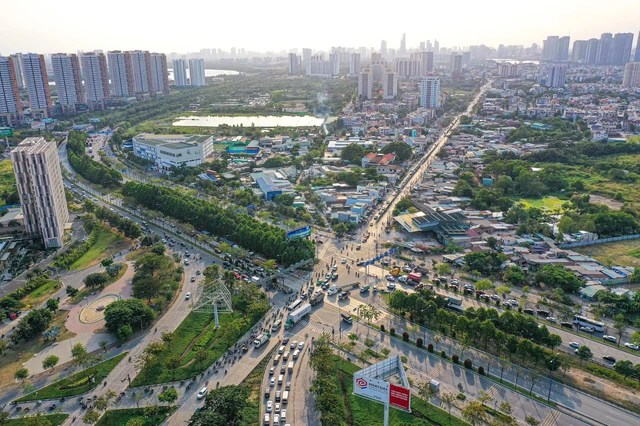 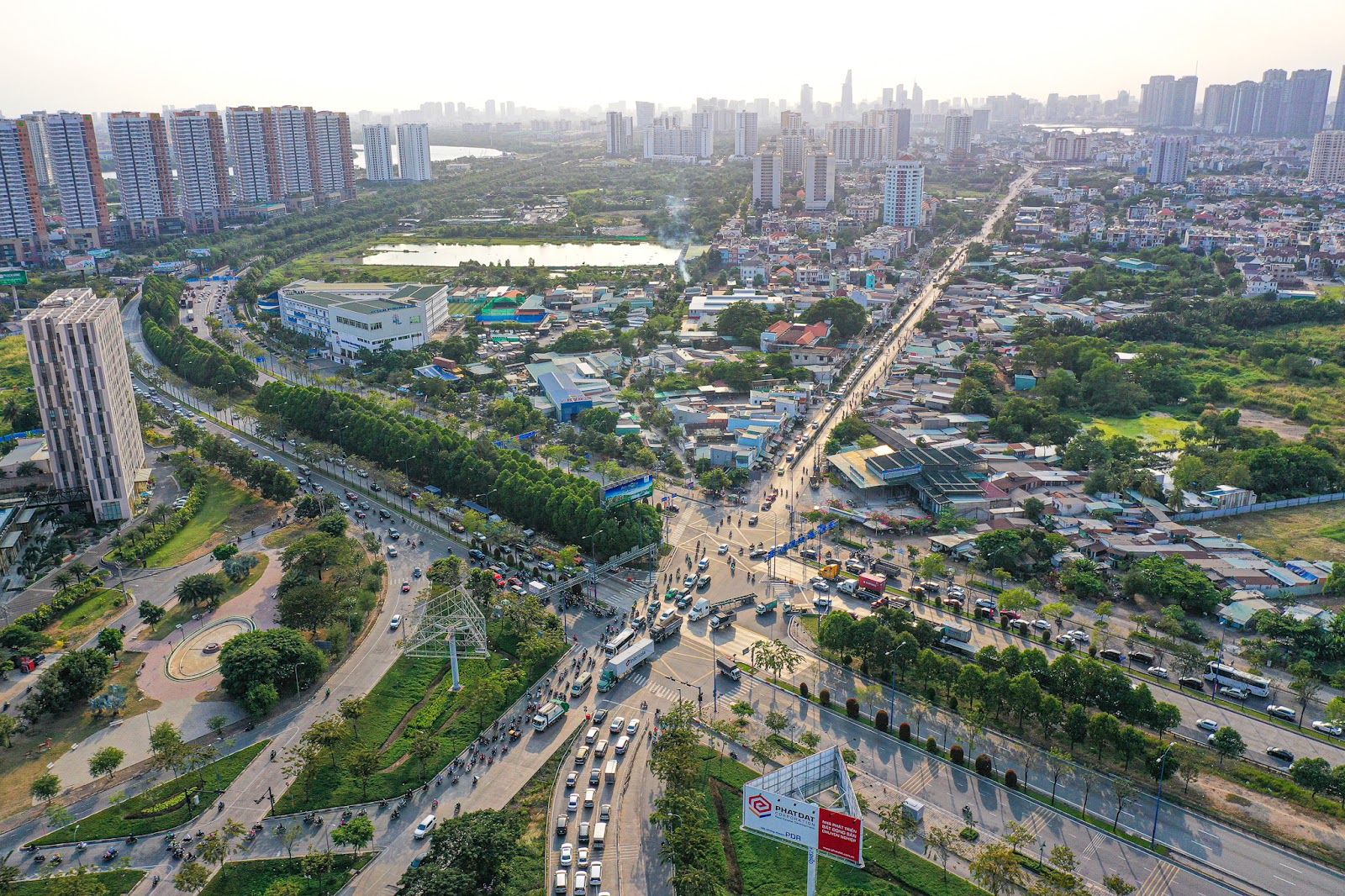 An Phu intersection is being built with an investment of nearly 4,000 billion VND, which is expected to reduce congestion at the beginning of the Ho Chi Minh City highway. Ho Chi Minh City – Long Thanh – Dau Giay and the route to Cat Lai port. The project also improves traffic capacity when Long Thanh airport (Dong Nai province) comes into operation. 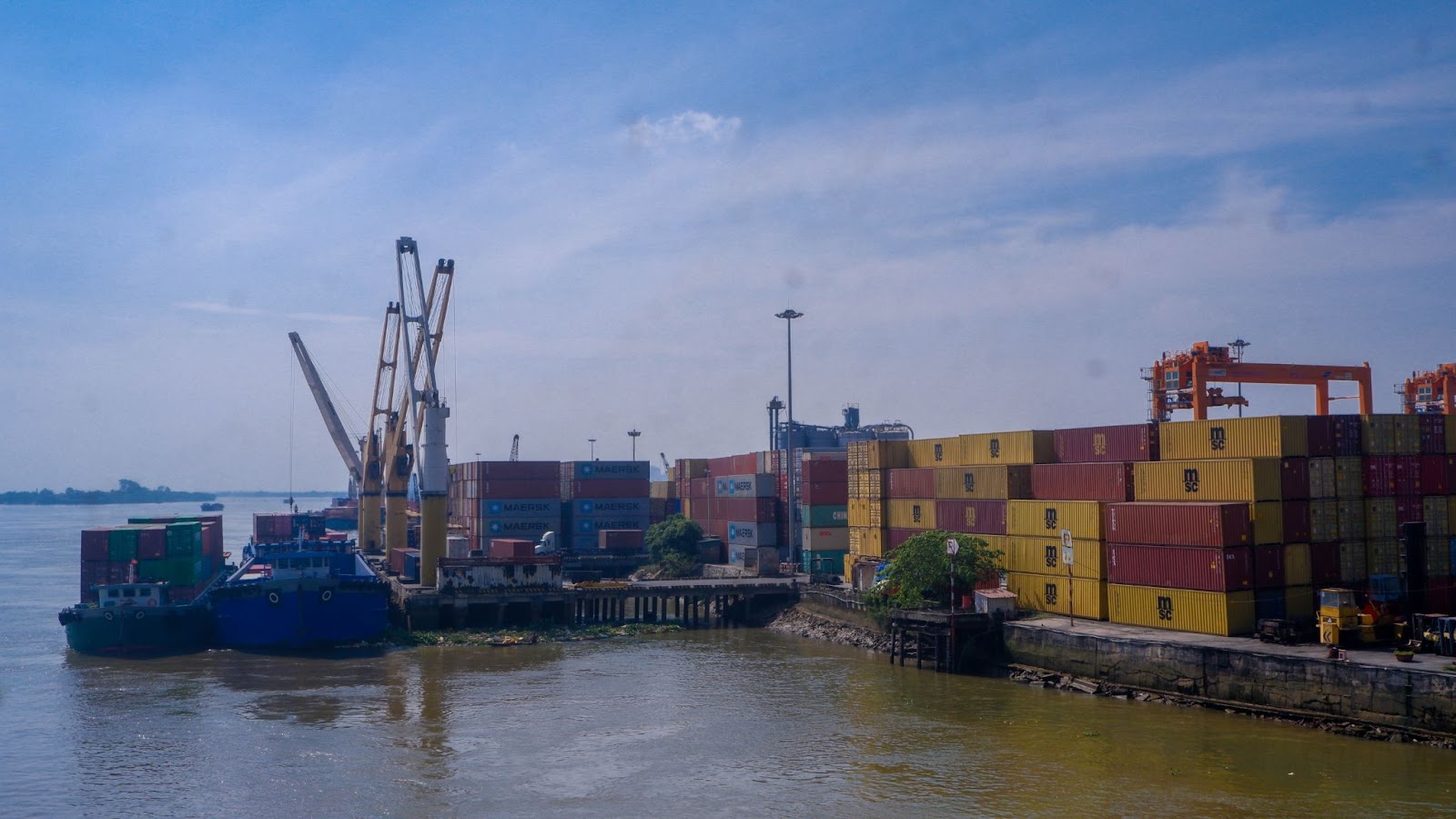 On the other hand, Thu Duc city has outstanding strengths and is especially favorable to develop into a logistics center. This new urban area is located in the center of the Southeast region with a synchronously invested transport system that is convenient to connect and cooperate in economic development with neighboring provinces. 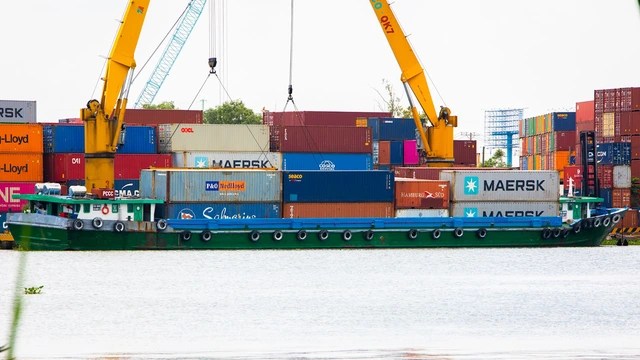 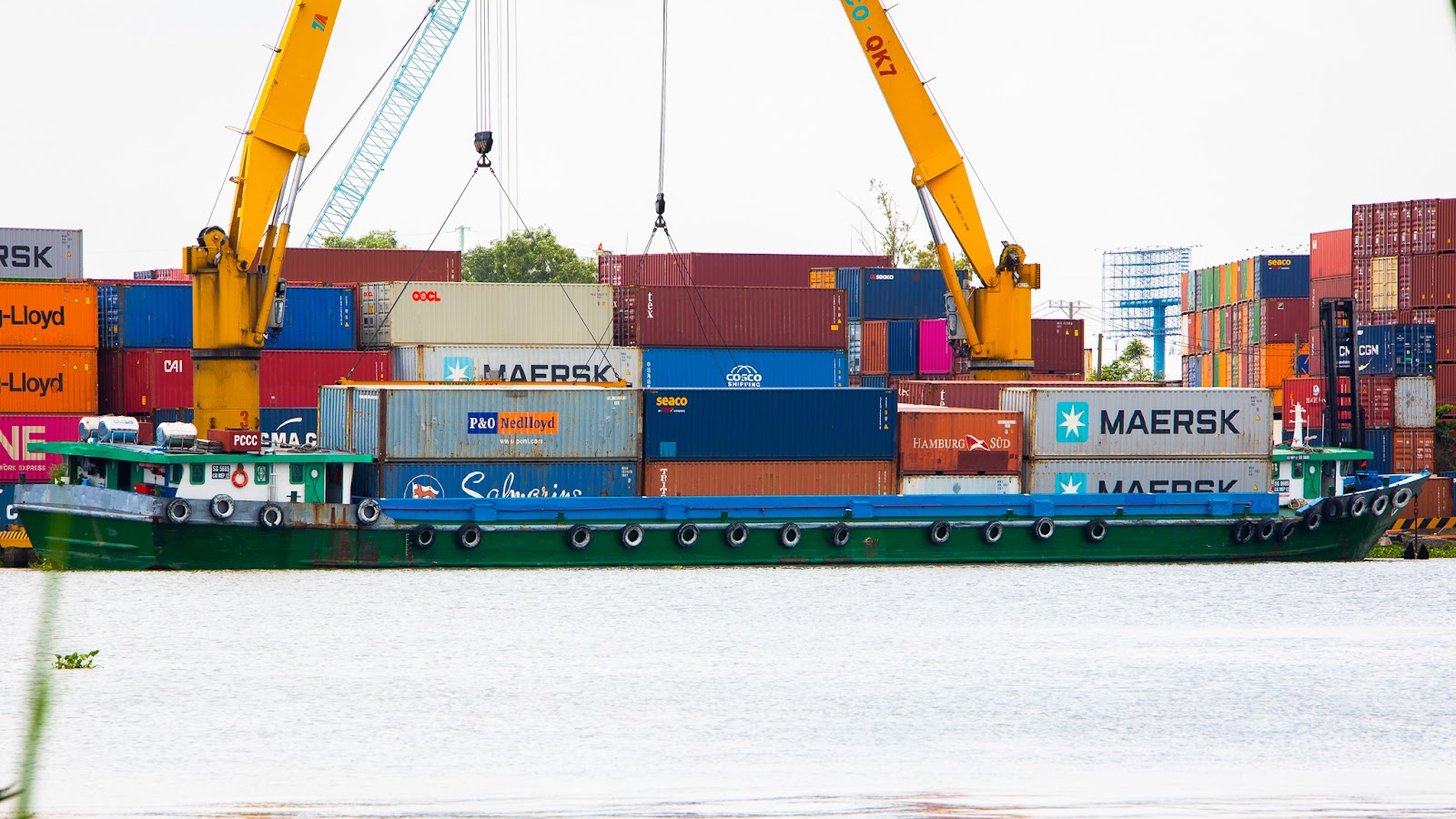 Thu Duc city currently has Cat Lai port – the largest international container port in Vietnam and many other small ports. Cat Lai Port accounts for nearly 50% of the import and export container market share nationwide and 90% in the southern region. 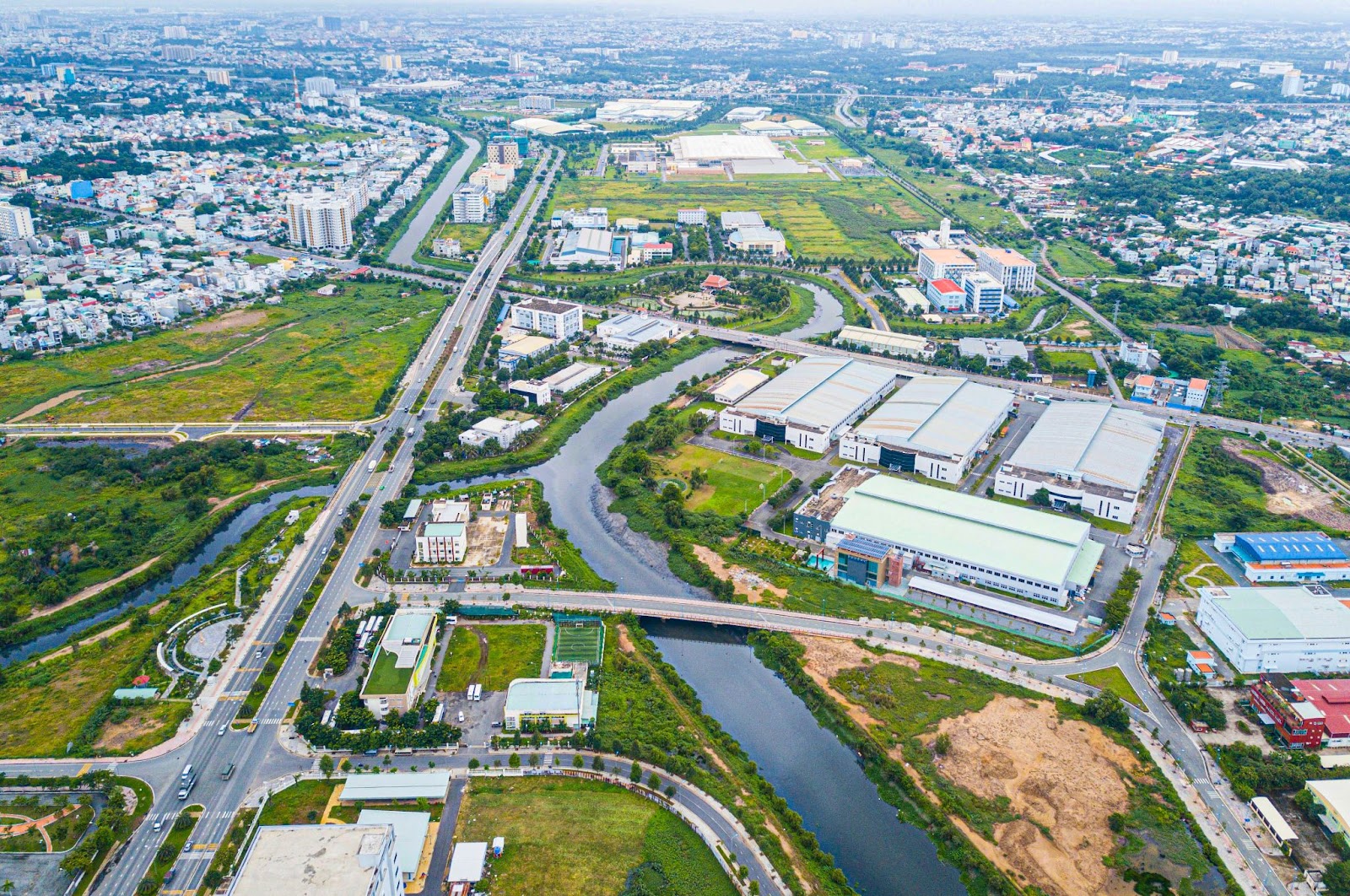 A notable area in the development circuit of the city. Thu Duc is a high-tech park in Ho Chi Minh City located next to Hanoi Highway extending to Ring 2, Tan Phu Ward, District 9, Ho Chi Minh City. This technology park focuses on large corporations such as: Intel (USA), Nidec (Japan), Samsung (Korea)… In which, the Samsung Electronics factory complex was built in 2015, with an area of ​​nearly 1 km2, total investment capital of 2 billion USD, located on Vo Chi Cong street, Tang Nhon Phu B ward…

Ho Chi Minh City Hi-Tech Park not only attracts the world’s leading large corporations but also many domestic and international universities to create talents for the country. In the photo is the FPT Campus building built by FPT Software with a design and construction scale of 69,000 m2 for 7,000 students to live and study. 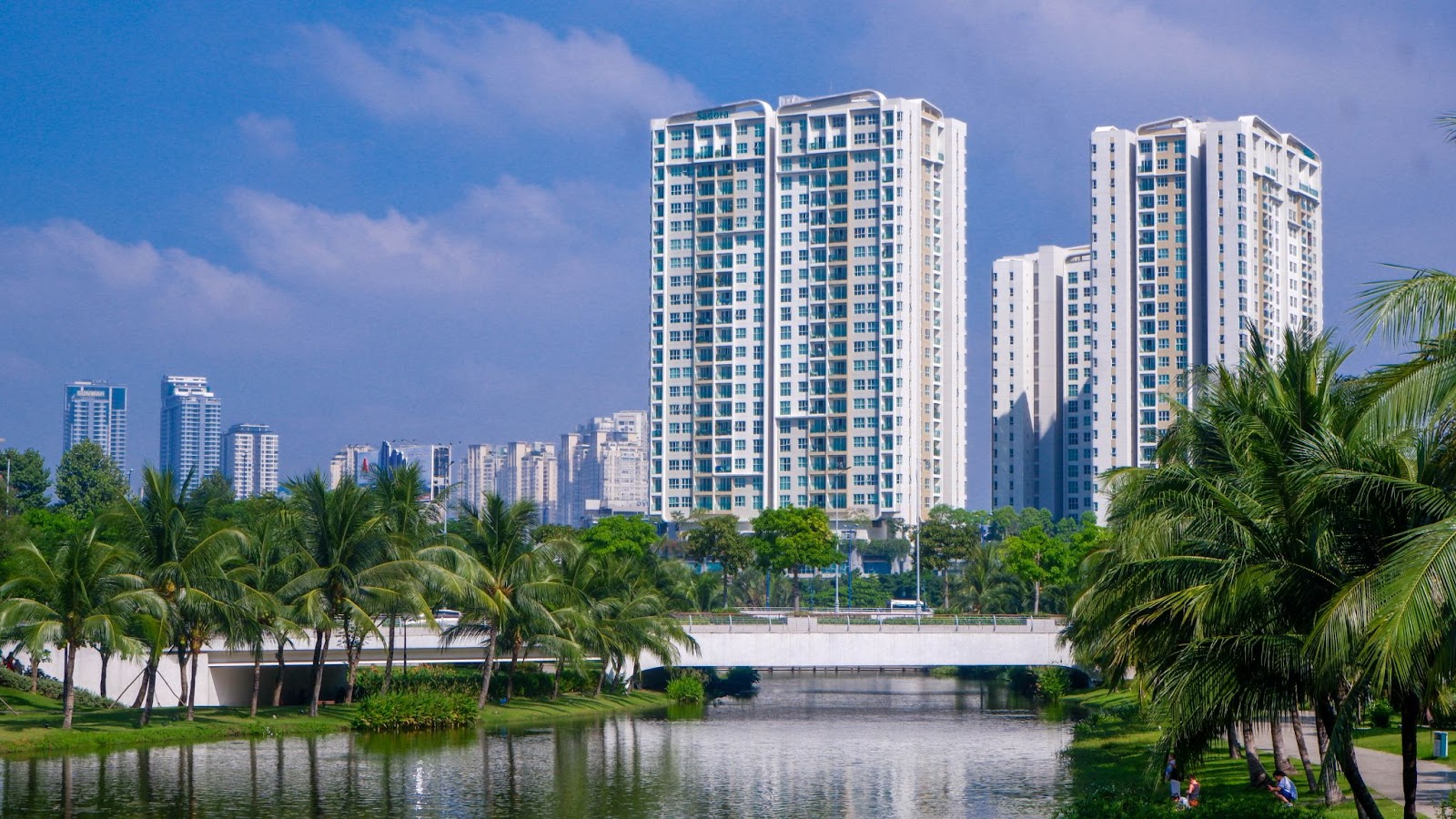 In addition, public projects are also developed by the People’s Committee of Thu Duc city in parallel with the urban area. Specifically, the city will invest in restoring 4 existing parks and building 41 green parks. Pictured is Sala Park in Sala Urban Area. This is a complex park category including freshwater lakes, trees, promenades, bridges and some man-made structures. In order to create a green space for residents here, somewhat separate from the city noise.