On the afternoon of November 11, with the majority of delegates in agreement, the National Assembly voted to pass a resolution on the state budget estimate for 2023. Accordingly, from July 1, 2023, the basic salary for employees will be increased to 1.8 million VND/month. 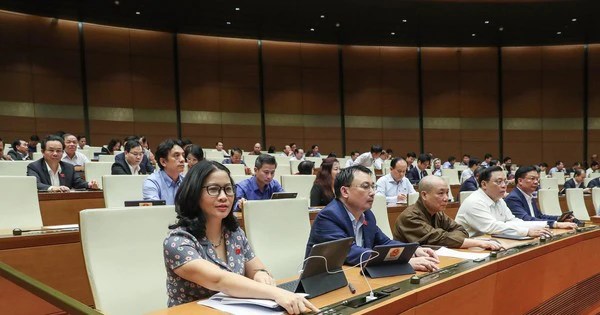 The National Assembly voted to pass the resolution on the afternoon of 11/11. Photo Like Italy

Regarding the implementation of the wage policy, in 2023, the National Assembly decided that the overall reform of the salary policy has not been implemented according to Resolution No. 27 of the Seventh Conference of the 12th Central Committee in the year 2023.

From 1/7/2023, increase the base salary for cadres, civil servants and public employees to 1.8 million VND/month; increase pensions and social insurance allowances by 12.5% ​​guaranteed by the state budget and provide additional support for those who retire before 1995 with low benefits; increase the standard of allowance for people with meritorious services to ensure not lower than the standard of poor households in urban areas and increase 20.8% of spending on social security policies that are attached to the base salary.

From January 1, 2023, to increase the occupational incentive allowance for preventive medicine and grassroots health workers according to Conclusion No. 25 of the Politburo.

In addition, the National Assembly also allows the continuation of the implementation of specific financial and income mechanisms for agencies and units that are implementing specific financial and income mechanisms at the central level approved by competent authorities. regulations for a number of state administrative agencies and units until the implementation of the overall reform of the wage policy in accordance with Resolution No. 27.

The National Assembly assigned ministries, central agencies and localities to continue implementing solutions to create a source of salary reform according to regulations. In the period of 2023 – 2025, it is allowed to continue to exclude some revenues when calculating the increase in local budget revenue compared to the estimate to save money for salary reform as prescribed in Resolution No. 34/2021/QH15 dated 13 November 2021 of the National Assembly.

The Government was assigned to focus on administering appropriate and effective fiscal policies, promptly responding to complicated fluctuations of the domestic and foreign situation, ensuring the goal of maintaining macroeconomic stability, controlling control inflation, promote growth, and ensure major balances of the economy.

“From 2023, the Government will develop a mechanism to track tax revenues from foreign suppliers declared and paid for income generated after providing differentiated goods and services to individuals and businesses in Vietnam. Vietnam, in order to have a basis for assessing, perfecting and ensuring sanctions for the implementation of tax administration policies towards foreign suppliers”, the resolution stated.

Resolution not approving the state budget estimate in 2023

READ MORE:  Vietnam will stick to a monetary policy that is “supportive for economic growth”