“Excited”, “relieved” is the common feeling of many international tourists after being able to travel again. They choose Vietnam because of its easy entry policy compared to many Asian countries.

Tre (29 years old) and Alina (27 years old), from Ohio state (USA), have long wanted to explore Vietnam with other Asian countries and have made a plan. However, the epidemic occurred, causing their plans to be delayed for 2 years.

“Initially, we agreed to accept the additional quarantine time upon entry if Vietnam still required it. When it was time to go, that regulation had also been lifted. Everything is so much easier and more comfortable for us,” Tre told.

According to his observations, people are no longer afraid of the epidemic or the gathering of people. Before that, the guy thought that maybe people would still keep their distance and wear a mask.

The first time coming to Vietnam, the common feeling of Tre and Alina is that the weather is quite cool but erratic in the past few days and difficult to predict accurately.

“Last week, we were walking on the street when we encountered heavy rain. The two were about to wait for the rain to stop, but it fell harder and harder. In the end, we had to run in the rain and get soaked. Other times, I look at the weather forecast and see the app say there is a 100% chance of rain, and eventually it clears up again. But fortunately, I have not had to endure the scene of flooded streets and wading as some people say, “Alina shared. 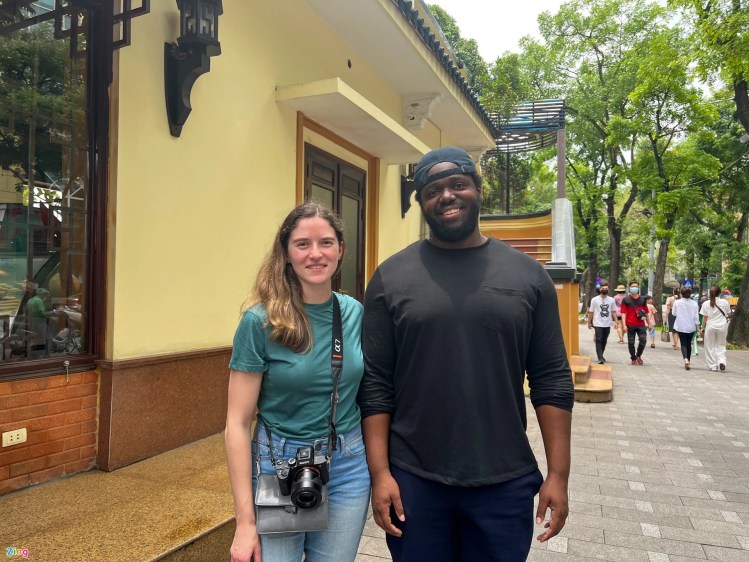 As soon as they learned that Vietnam was open for tourism, Alina and Tre arranged their work to come here as planned for a long time. Photo: Tra My.

What makes the American couple excited during the trip is that they have the opportunity to enjoy typical Vietnamese dishes in the style of native cooking.

“I used to eat many Vietnamese dishes in the US. They are delicious but the taste tasted here is still different and more special. This time, I was able to try pho, bun cha, and bread,” Tre said.

In addition, they also love the taste of coffee in Hanoi.

“The scene of restaurants lining the sidewalk with people eating, drinking and chatting is a new thing in our eyes. We tried it and it was a fun experience, only I was quite afraid of breaking the plastic chairs when I sat on it,” Alina laughed.

In the coming days, after walking around Hanoi, Sapa, and Ha Long Bay, the two will set foot in Ninh Binh and visit Trang An and Tam Coc before returning to the US.

Sharing with Zing, Maud and Cleo (19 years old) said they took a flight to Hanoi on the evening of May 30. The next morning, they made an appointment to meet their friend Moira (25 years old) – who came to Vietnam more than 3 weeks ago and had just moved from Ho Chi Minh City to Hanoi.

“This is our first time going to Asia. Before coming to Vietnam, Cleo and I traveled in Malaysia. Everyone we met recommended visiting Vietnam. I look forward to discovering your country’s culture, cuisine and nature,” Maud said.

According to the group of tourists, what makes them comfortable when coming to Vietnam is that the restrictions on Covid-19 have all been lifted. 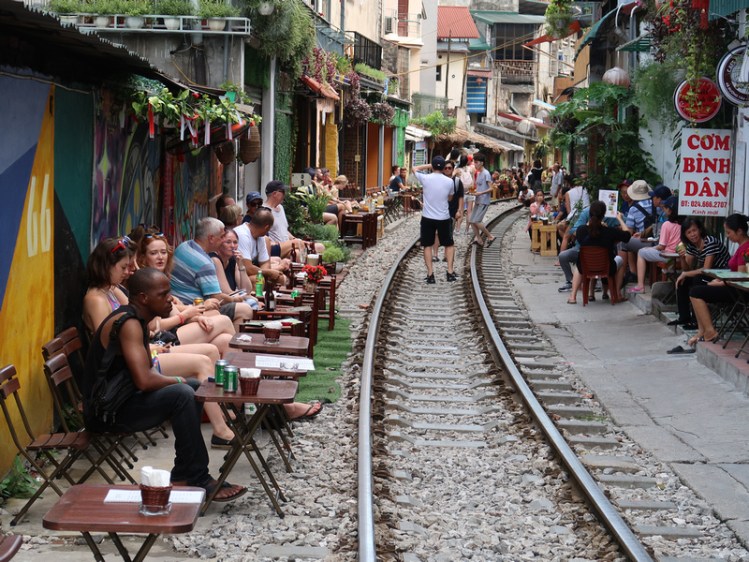 After international tourism reopened, Phung Hung train street is one of the attractions for foreign tourists to visit and check-in

“In Europe, quarantine regulations are relaxed and it is easier for us to go to other countries. I am very happy to be traveling again and have visited Spain. When we come to Vietnam, we only need to apply for a visa, do not need to test for Covid-19 and enter is very easy. When we go out on the street, we are not required to wear masks,” Cleo said.

Like many foreign tourists, the girls are not used to the hot and humid weather in Hanoi. They want to try many popular dishes such as banh mi, spring rolls or pho.

After 2 days in Hanoi, the group will take a bus to Ha Giang to play. Before returning to the Netherlands, they plan to explore Singapore.

After 2 years of not being able to travel abroad because of the epidemic, Park Sang Woo (30 years old), an engineer from Korea, and his girlfriend decided to come to Vietnam.

“Compared to other Asian countries, I find Vietnam’s quarantine regulations more relaxed and easy to enter. Therefore, I chose this place as my first destination after the translation. I also know that Coach Park Hang Seo is very famous and loved in Vietnam, so I want to come here,” he told Zing.

On the second day in Hanoi, Park and her lover went to Phung Hung train street for a walk. Although they had researched about this place in advance online, the two were still excited to see the uniqueness of the coffee village next to the train line.

“I didn’t think there were so many people living here. After taking photos, we will find a nearby cafe and restaurant to have lunch,” Park’s girlfriend shared.

According to Park, Vietnamese people are friendly and kind. He also enjoys street food, especially pho and banh mi.

However, Park has not yet been able to adapt to the much hotter and wetter weather than in Korea. After Hanoi, he plans to explore Ninh Binh before returning home.

Taking advantage of the check-in photo before entering Ngoc Son temple, Kim (40 years old) and his girlfriend, a tourist from Korea, were excited.

In addition to easy entry procedures for foreigners, Kim said that he chose Vietnam as his first destination after 2 years of not traveling because of the low cost.

Both can comfortably spend in Vietnam without worrying much about the price. Kim arrived in Ho Chi Minh City first and flew out to Hanoi to meet his girlfriend, who departed from Korea a few days after him.

Like Sang Woo, Kim is not used to the early summer weather in Hanoi.

“The heat makes me sweat and thirsty all the time,” the man said.

Having had the opportunity to visit Vietnam about 5 years ago, Kim saw that the scene had not changed much compared to his memory. However, the number of international visitors like him cannot be as large as before the epidemic happened.