Egypt’s Suez Canal will reopen for shipping traffic in both directions on Monday evening after a giant container ship which had been blocking the busy waterway for almost a week was refloated, with more than 400 ships waiting to pass through.

The Suez Canal Authority’s chairman Osama Rabie said the channel was navigable after the 400-metre (430-yard) long vessel Ever Given was freed undamaged earlier on Monday.

“The ship came out intact and it has no problems. We’ve just searched the bottom and soil of the Suez Canal and thankfully it is sound and has no issues, and ships will pass through it today,” he told Nile TV.

The authority informed shipping agencies that convoys of ships will resume running both ways through the canal from 7 p.m. (1700 GMT), two agents told Reuters.

Related: Finally, EVER GIVEN ship has been UNSTUCK & Moving into Suez Canal after 6 Days!!

The Ever Given had become jammed diagonally across a southern section of the canal in high winds early last Tuesday, halting traffic on the shortest shipping route between Europe and Asia.

Live footage on a local television station showed the ship surrounded by tug boats moving slowly in the centre of the canal on Monday afternoon. The station, ExtraNews, said the ship was moving at a speed of 1.5 knots.

After dredging and excavation work over the weekend, rescue workers from the SCA and a team from Dutch firm Smit Salvage had succeeded in partially refloating the ship earlier on Monday.

“The time pressure to complete this operation was evident and unprecedented,” said Peter Berdowski, CEO of Smit Salvage owner Boskalis, after the Ever Given was refloated.

The company said approximately 30,000 cubic metres of sand was dredged to refloat the 224,000-ton container ship and a total of 11 tugs and two powerful sea tugs were used to pull the ship off.

Evergreen Line, which is leasing the Ever Given, confirmed the ship had been successfully refloated and said it would be repositioned in a lake that sits between two sections of the canal and inspected for seaworthiness.

Bernhard Schulte Shipmanagement (BSM), the technical managers of the container ship, said there were no reports of pollution or cargo damage.

The authority said earlier it would be able to accelerate convoys through the canal once the Ever Given was freed. “We will not waste one second,” Rabie told Egyptian state TV.

He said it could take up to three days to clear the backlog, and a canal source said more than 100 ships would be able to enter the channel daily. Shipping group Maersk said the knock-on disruptions to global shipping could take weeks or months to unravel.

READ MORE:  FDI is the highlight of Vietnam’s economy amid the pandemic 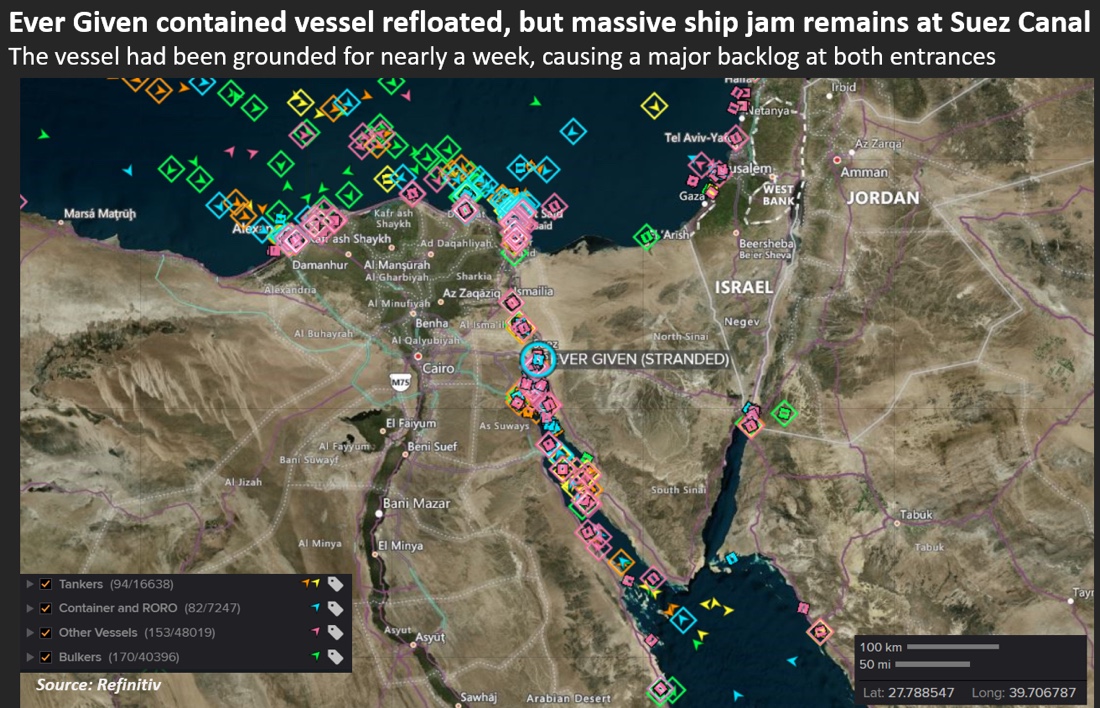 Egyptian President Abdel Fattah al-Sisi, who had not publicly commented on the blockage, said Egypt had ended the crisis and assured resumption of trade through the canal.

Oil prices were more than 1 percent lower at $63.85 a barrel after the ship was refloated. Shares of Taiwan-listed Evergreen Marine Corp had closed 1.75% higher.

About 15% of world shipping traffic transits the Suez Canal, which is an important source of foreign currency revenue for Egypt. The stoppage was costing the canal $14-15 million a day.

Maersk was among shippers rerouting cargoes around the Cape of Good Hope, adding up to two weeks to journeys and extra fuel costs.