Mr. Sven Eschrich, Vice President Operations – New Product Introductions of Techtronic Industries in Vietnam and the COO and General Director of Deutsches Haus, Mr. Elmar Dutt handed over today 15 Intensive Care Ventilators and 30 Patient Monitors from DRÄGER in Germany for the immediate use in hospitals in Ho Chi Minh City.

This donation has been initiated by the Vietnamese Ambassador to the Federal Republic of Germany in Berlin H.E. Dr. Minh Vu and has been supported by EUROCHAM – the European Chamber of Commerce and the GBA – German Business Association in Vietnam.

“In this critical time of the COVID-19 pandemic we are standing with both of our companies and our German and European partners side-by-side with Ho Chi Minh City and Vietnam, to support the hospitals in our community with much needed medical equipment to save lives.” Mr. Elmar Dutt General Director of Deutsches Haus said. 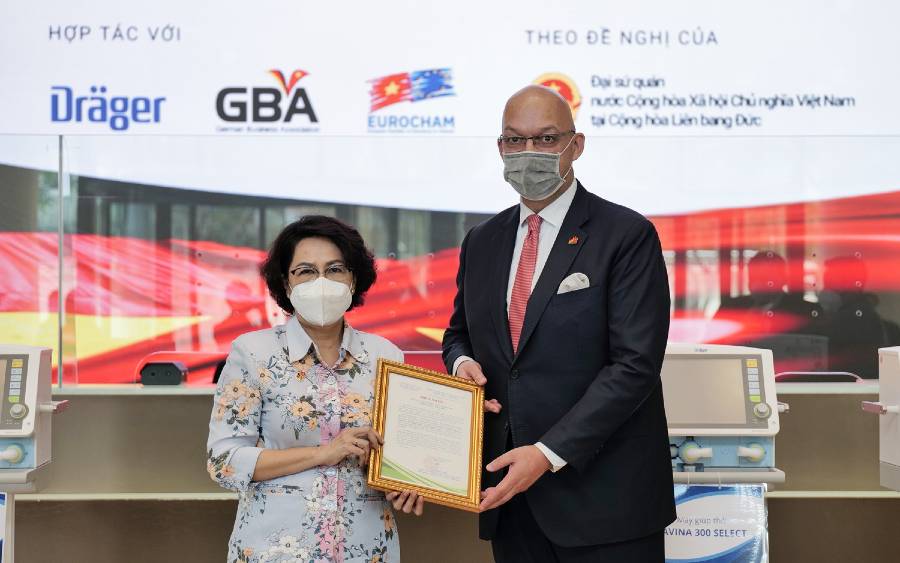 A shipment of 2.6 million doses of the AstraZeneca Covid-19 vaccine gifted by Germany also arrived in Vietnam’s HCMC on Sunday.

The vaccine donation originates from German stockpiles and follows an offer made by German Chancellor Dr. Angela Merkel to Vietnamese Prime Minister Pham Minh Chinh, according to a press release by the Germany Embassy in Vietnam.

This is the second delivery of vaccines from Germany, following a batch of 852,480 AstraZeneca vaccine doses via the Covax initiative that arrived in Hanoi on September 16.

Besides the vaccine donation, Germany and Vietnam are also cooperating in activities worth up to 104 million euros ($121.65 million) in the areas of technical and vocational training, pandemic prevention, social security and digitalization.

These include the establishment of a center for pandemic prevention together with the Vietnamese Ministry of Health and the creation of advisory services to combat illegal wildlife trade.

Vietnam and Germany celebrate the 10th anniversary of their Strategic Partnership this year.