Mr. Musk, a celebrity in the universe, tweets about it frequently; It was parodied on the popular TV show “Saturday Night Live”; Collins Dictionary chosen NFT as its word of the Year for 2021.

Exchanges boom and flourish in 2021.

The bustling 2021 has finally ended, and the cryptocurrency world will usher in new challenges and chances in 2022.

01 The Year of Booming Cryptocurrencies

The Virtual world seems to extract more attention from people.

On Christmas Day last year, the NO.1 download in Apple’s APP Store in the US was a VR app: Oculus.

As a software used to pair with Oculus VR glasses, its hit also means that Meta (formerly Facebook)’s VR glasses have been widely popular over the holiday season.

In addition to this new gift craze, other facts prove the point, such as the cryptocurrency trading volume is seven times more than last year, and Sotheby’s sold more than $100 million of NFT this year. READ MORE:  Vietnam is in top 5 countries export the most goods to Walmart

Cryptocurrencies experienced many twists and turns in 2021. Concepts such as NFT, DAO, metaverse, and Web3 have emerged, and those who can predict the correct trend will withstand the trend, no matter it is institutional investors, retail traders, or practitioners. This is almost a general rule.

02 Challenges And Chances For Exchanges

About 45% of cryptocurrency owners are millennials born between 1980 and 1996, according to a recent survey commissioned by a venture capital giant a16z, a consulting firm.

After the birth of Web3, some organizations claimed that Web3 would have 1 billion users in the next five years, and most of those billion users would be made up of people born after 1980.

For cryptocurrency institutions, the favor of the millennials is half the battle. In other words, whoever can win over these young people will hold the initiative.

Millennials are statistically more likely to emphasize an investment philosophy that enriches both themselves and the world around them. They prefer cryptocurrencies to gradually solidify real estate and stock markets.

The competitive landscape of cryptocurrency exchanges is not set in stone, and the selection and anticipation of new cryptocurrencies, as well as compliance operations, will be key indicators to distinguish the strengths and weaknesses of cryptocurrency institutions including exchanges.

MEXC started its global compliance operation in 2020, and during this process, it became known for its fast and prescient layout of the cryptocurrency track, which is now among the world’s top 3 spot trading volume after two years.

According to relevant data, MEXC’s overseas users increased by 1,100% in 2021. The annual growth rate of trading volume exceeded 700%, and overseas users accounted for 70% of the total users.

READ MORE:  How Vietnam’s HCMC tops the list of Best cities for expats in 2021? 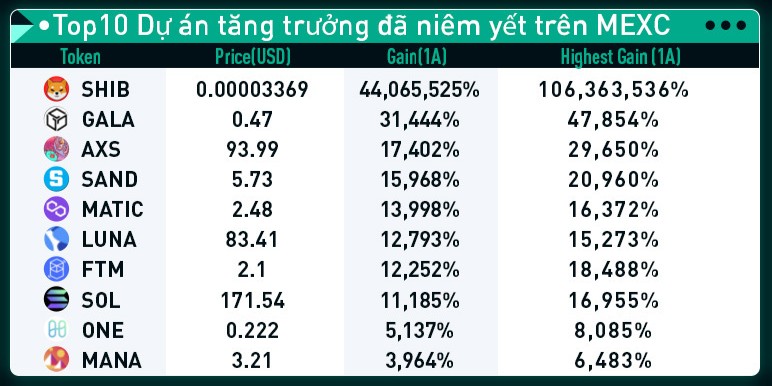 According to MEXC Research and the data source of CoinGecko, the top 10 cryptocurrencies with gains in 2021 are all from MEXC debut projects, and the track mainly covers the two sectors of metaverse and blockchain underlying infrastructure, so it can be seen that the right track is of paramount importance to investment.

It is also worth noting that the top gainer SHIB from MEME registers a surprising 106,363,536% increase. The influences of MEME exerted on the cryptocurrency market defy description.

Looking ahead to 2022, what will happen to the cryptocurrency world?

1. More Capital Than Ever Before

Beyond that, with millennials entering this field, cryptocurrencies will continue to astonish and enrich the world in 2022.

Ethereum created many innovative models in its early days, such as NFT, DAO, and chain games, which are becoming a reality. Their possibilities are endless.

A large number of DAO teams came into being in the second half of 2021 and then got to grips with the stagnant growth, which was resulted from project mismanagement, brain drains, slow decision making, and misallocation of capital by raising significant amounts of capital. Just like how OpenSea suddenly became a major market for NFT, there will be a winner in the DAO space next year.

At a hearing before the House Financial Services Committee on December 8, executives from six cryptocurrency companies, including Coinbase and Circle, called on Congress to make clearer rules for the burgeoning $3 trillion industry, but they also warned that too severe restrictions would push industries overseas.

In October, one executive of a16z travelled to Washington DC to lobby for the regulation of Web3. As a policymaker, a16z has been trying to come up with a potential solution for Web3 network regulation.

It is believed that by 2022, the US government will come up with clear regulations on cryptocurrencies. Globally, “cryptocurrency unicorns” are more likely to emerge among cryptocurrency exchanges and institutions that operate in compliance.

Recently, Ark Invest Founder Catherine Wood released the year-end summary and outlook for the future. Unlike the previous stage of the Internet bubble, whose reappearance seemed to worry us all, (1) today’s technology companies have real market demand, not concept; (2) Investors have taken the potential risks very seriously. Therefore, considering a five-year investment term, the following five fields that Ark focuses on in the future, including DNA sequencing, robotics, energy storage, AI, and blockchain technology, will generate 3-5 times the return on investment.

Anyway, 2022 is bound to be another amazing year. No matter what happens in the market, cryptocurrencies will continue to improve and move toward the inevitable future of the entire world.