In the afternoon of April 6, 2021, at the Consulate General of Italy in Ho Chi Minh City, on behalf of the President of the Republic of Italy, the Consul General of Italy in Ho Chi Minh City, Dante Brandi, has bestowed the Knighthood of the Order of Merit of the Star of Italy to Madame Le Thi Quynh Trang (Trang Le) – President of Vietnam International Fashion Week and President of the Council of ASEAN Fashion Designers (CAFD), due to her great contributions in promoting the relationship between Vietnam and Italy in the fashion field.

The Order of Merit of the Star of Italy is one of the two Orders of Merit of the Republic of Italy. It is devoted to Italians abroad and foreigners who have acquired special merits in the promotion of friendly relations and cooperation between Italy and other countries and the promotion of ties with Italy. In Vietnam, this Merit was bestowed to a limited number of prominent persons in the fields of politics, economics, culture, academia and justice. Particularly in the field of fashion and communication industry, Ms. Trang Le is honored to be the first individual in Vietnam to be awarded this noble and prestigious award from the President of the Republic of Italy.

Being the Founder and President of Vietnam International Fashion Week, Madam. Trang Le is seen as the pioneer in putting Vietnam fashion industry to the next level while bringing the world’s fashion closer to Vietnam audience through various intensive and meaningful cultural and entertainment activities. Her endless effort has been recognized by ASEAN Secretariat when she was appointed as the President of the Council of ASEAN Fashion Designers in 2020 with the mission to develop regional fashion industry. Madam Trang Le has made positive contributions to the general development of the fashion industry in Vietnam through reality TV shows, as well as major events specializing in fashion and modeling. Among those, the reality TV show Vietnam Model – Vietnam’s Next Top Model, The Face Vietnam, and the Vietnam International Fashion Weekthat have gained a lot of success. Launched in 2014, the Vietnam International Fashion Week has opened a new page in the general development of Vietnamese fashion, officially bringing the name of Vietnam on the world fashion map.

In particular, for Italy, this is not only one of the cradles of human civilization, but it is also known as one of the fashion hotspots of the world with distinctive lifestyle, famous culinary background, and beautiful landscape for tourism. Italian culture, country, and people were transmitted and promoted to millions of Vietnamese TV viewers by Ms. Trang Le and her colleagues at MultiMedia JSC through various activities in Vietnam’s Next Top Model. Before that, Ms. Trang Le was also the first person to directly bring models from Vietnam’s Next Top Model to the prestigious Milan Fashion Week. Since 2014, Vietnam International Fashion Week continues to carry out the mission of promoting the fashion and culture of Italy to Vietnamese audiences through a series of spectacular fashion shows from a series of Italian famous names such as designer Antonio Grimaldi, a high-end fashion brand from the famous designer Maison Gattinoni, notable designer Renato Balestra, or talented designer Elisabetta Franchi. In addition, many meaningful seminars and information exchanges were also held such as the seminar “50 years of development of MICAM 88: The pinnacle of the Italian design leather and footwear industry”, or the Italian culinary and cultural experiences taking place within the framework of Vietnam International Fashion Week, have significantly contributed to promoting the image, the country and people of Italy to millions of Vietnamese audiences. Ms. Trang Le’s regular and continuous contribution in promoting the image of Italy to Vietnam has been especially recognized and appreciated by Mr. Dante Brandi – Consul General of Italy in Ho Chi Minh City. He was also the person who proposed to the President of the Republic of Italy to award Ms Trang Le with the Knighthood of the Star of Italy for her contribution in the field of fashion and entertainment. 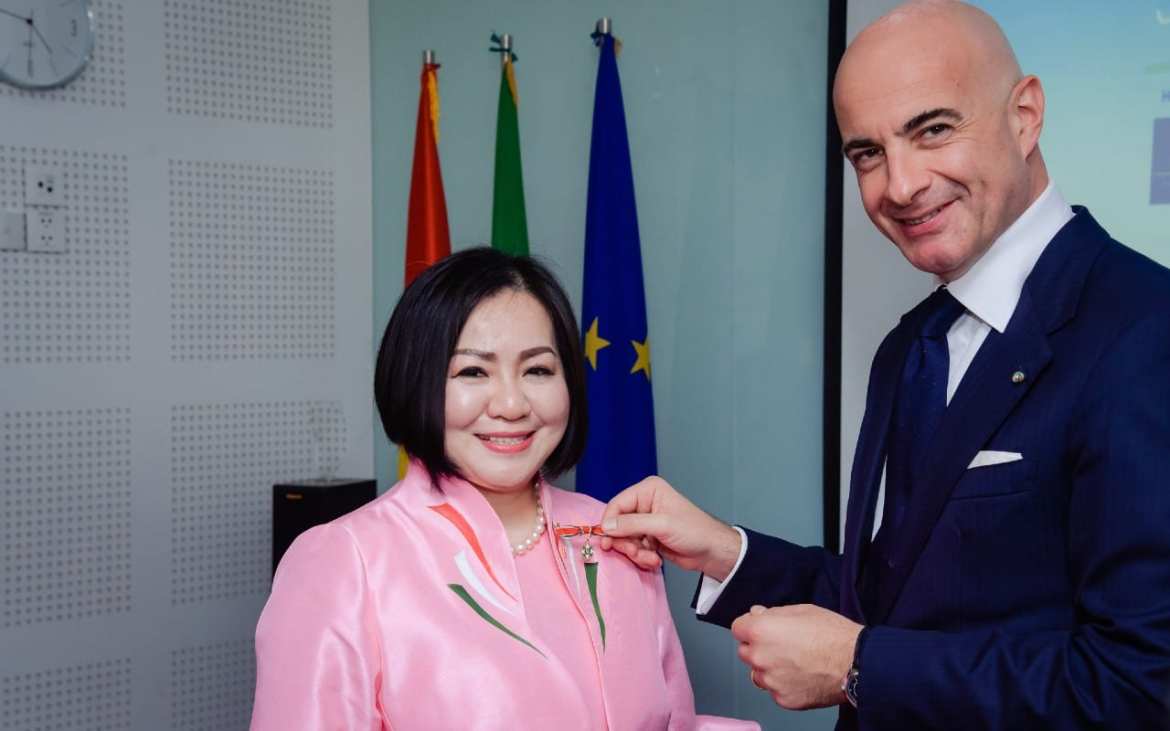 Trang Le is honored to be the first individual in Vietnam to be awarded this noble and prestigious award from the President of the Republic of Italy. Photo: Duong Nguyen

Sharing about this, Mr. Dante Brandi said: “The Order of the Star of Italy is one of the highest merits from Italian Government to be bestowed to foreigners who have given significant contribution in strengthening the friendship between Italy and the other countries. Therefore, not so many people receive such notable merit. Ms. Trang Le is a pioneer in Vietnam fashion industry, and she is also a living model who has constantly inspired her initiatives to the excellence of Italian fashion, taking Italy as inspiration and as reference model for the development of the sector in Vietnam. We highly appreciate Ms. Trang Le’s efforts in developing the Vietnamese fashion industry in general, and in maintaining and further tightening the relationship between Vietnam and Italy through the fashion sector in particular. The Consulate General of Italy in Ho Chi Minh City has had wonderful cooperation with Ms. Trang Le and MultiMedia JSC over the years, and we are extremely impressed with her professional and dedicated working style. The Knighthood of the Star of Italy from our Head of State awarded to Ms. Trang Le represents the recognition of the Italian Highest Authority for her contributions to the preservation and promotion of the relations between the two countries. ”

Receiving this noble merit, Ms. Trang Le could not hide her pride and said: “Italy is a country with a long-standing culture, especially in the field of fashion and art. Personally, I have a lot of love and affection for this beautiful country. I am very happy that the cooperation between Vietnam International Fashion Week and the Italian institutions has brought such good results, contributing to promoting the image of the culture and the country of Italy to millions of Vietnamese people. I am extremely appreciative and grateful to the President of the Republic of Italy Mr. Sergio Mattarella, the Ambassador of Italy in Vietnam Mr. Antonio Alessandro and the Consul General of Italy in HCMC Mr. Dante Brandi for always creating favorable conditions and opening up many opportunities for cooperation with MultiMedia JSC. This recognition is a very precious reward that I think is not only for me but also for all of us who have been supporting and watching the progress of the time day by day. This is also a great encouragement for us to continue to well fulfill our goal of bringing Vietnamese fashion to the world”.

To conclude, the bestowal from Italian Government to Madam Trang Le for her great contribution to develop the relationship between Italy and Vietnam is the right recognition. Hopefully this medal will mark another new turning point in the two countries, especially in the fashion industry.

READ MORE:  Vietnam’s GDP up 5.64% in first half of this year despite COVID-19 outbreaks
News related