This surprise online meeting was attended by officials from across the province, city and council levels.

According to a report in the Global Times, this unexpected online meeting was attended by officials from across provinces, cities and councils. Senior Chinese officials were also present, including Premier Li Keqiang, who urged authorities to take action to maintain jobs and reduce unemployment.

The country’s economy has been affected in many different ways since the Covid-19 wave spread in March, causing many major cities to be affected by blockade measures. Most notably, a financial center like Shanghai suffered from being unable to leave their homes or surrounding areas for a month and a half.

According to the Global Times, Chinese Premier Li Keqiang said that in some respects, one could see the economic effects worsen in March and April, larger than those already experienced. released in 2020 during the first outbreak of Covid-19. He pointed to a number of indicators including the unemployment rate, falling industrial production and freight shipments.

The prime minister has increasingly emphasized the economic downturn in recent weeks and described the situation as “complicated and severe” in early May. However, his words on Wednesday showed the outlook. the worst.

Investment banks are cutting their forecasts for the Chinese economy this year. UBS has lowered its full-year GDP growth forecast to 3%, citing risks from Beijing’s strict Zero-Covid policy. China said it expected growth of around 5.5% this year. The country reported growth of 8.1% last year and 2.3% in 2020 – the slowest growth rate in decades.

READ MORE:  Despite the bans, Russian energy export revenue is forecast to increase

The online conference took place after a meeting of the State Council. During that meeting, authorities announced 33 new economic measures, including increasing tax refunds, expanding loans to small businesses and providing emergency loans to the struggling airline industry, according to Xinhua news agency.

Some of the 33 measures above also help ease Covid-19 regulations, such as lifting restrictions on trucks traveling from low-risk areas. 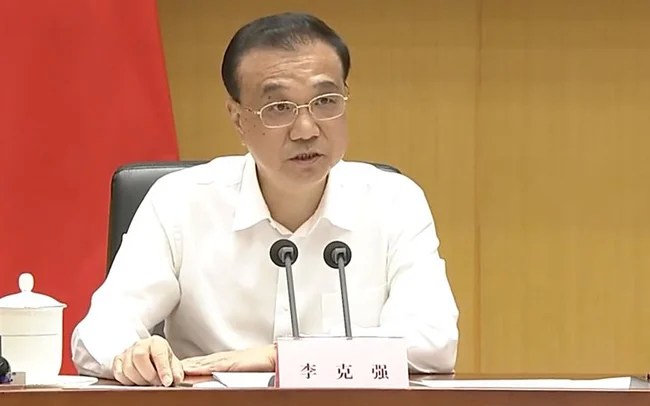 Efforts to race against the pandemic

According to Xinhua, the State Council will send task forces to 12 provinces to oversee the implementation of these policies.

Throughout the pandemic period, China has adhered to a strict Zero-Covid policy that aims to eliminate all possibilities of widespread transmission. The country has resorted to border controls, mandatory quarantines, mass testing and rapid lockdowns.

But this strategy has been challenged by the highly infectious type of Omicron variant. The pandemic broke out across the country earlier this year despite authorities racing to blockade counties and intercity borders.

By mid-May, more than 30 cities were under full or partial lockdown, affecting 220 million people nationwide, according to CNN’s calculations. Both supply and demand were destroyed when the Big Tech or consumer goods industries could not escape the ravages of the pandemic.

While some of those cities have reopened, the impact of that disruption is still present with unemployment rising to its highest level since the Covid-19 outbreak in early 2020.

Many companies have been forced to suspend operations, including Tesla and Volkswagen. Airbnb is the latest multinational to exit the game.

The crisis still has no clear end. Authorities are still struggling to contain the spread of the virus and top leaders are still adamantly pushing for the implementation of the Zero-Covid policy.

The capital Beijing has also seen an increase in infections over the past few weeks. Seven districts of this city have been partially blocked, affecting nearly 14 million residents. The city’s two largest districts, Chaoyang and Haidian, were also forced to close all non-essential businesses including shopping malls, gyms and entertainment venues.