The Bitcoin crypto market drops to a 10-month low of just $31,000, predicting the drop will continue.

Bitcoin at the beginning of May 9 was at about $ 34,600, continuously plummeted, at the end of the day, there was a time when it nearly touched $ 31,000 at the end of May 9, Vietnam time, closing the 5th consecutive decrease in price with down nearly 10% in this session. 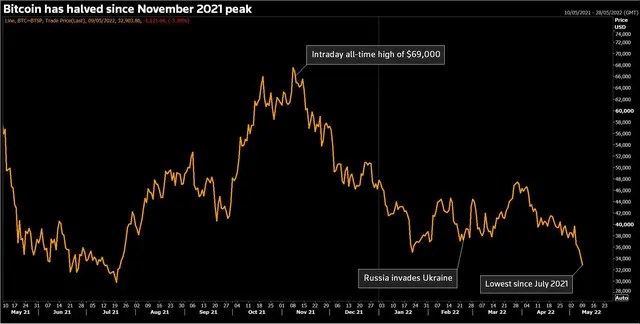 Bitcoin’s plunge in the past session is said to be influenced by the US stock market, specifically technology stocks.

Risk assets are being shunned by investors as the dollar soared to a 20-year high because the US Central Bank has a very “hawkish” attitude in interest rate policy to combat inflation. The ongoing conflict in Ukraine and China’s economic slowdown due to the Covid-19 epidemic are causing investors to rush to safe-haven assets, and the greenback is the top choice at the moment. when the US Federal Reserve (Fed) was on the way to raising interest rates, and the country’s bond yields skyrocketed.

As interest rates (and the dollar) continue to rise, some crypto skeptics argue that Bitcoin sales are just getting started. The Fed is starting to pull back on its monthly bond purchases and other stimulus measures, which could be bad news for all speculative asset classes.

Michael Kamerman, CEO of trading platform Skilling said: “Extraordinary trading of digital assets as it is today is not unusual in previous years”, “Cryptocurrencies are increasing day by day” move in sync with tech stocks as investors treat both as risky assets and often retreat to safer corners of the market when the market is volatile.” Therefore, investors of Cryptocurrencies are closely monitoring equity market performance looking to see when Bitcoin bottoms out, as bitcoin and equities have recently traded side-by-side.

According to crypto data provider Kaiko Research, the 30-day rotating correlation between Bitcoin and Nasdaq 100 spiked to an all-time high of 0.8 on Monday (May 9).

The Nasdaq index – of technology companies – fell 1.5% last week, to a 52-week low, and has lost 22.4% year-to-date, affected by the inflation outlook persistently forcing the Fed to raise interest rates aggressively despite slowing growth. The Nasdaq index continued to drop more than 3% at the end of May 9 Vietnam time compared to the close of the previous session.

Other cryptocurrencies, sometimes referred to as altcoins, were also hit hard. Ethereum, binance, solana, and cardano are all down about 15% in the past week, while Elon Musk’s beloved dogecoin is down 10%.

Ether, the world’s second-largest cryptocurrency, underpinning the ethereum network, plunged to $2,360 by the end of May 9 ET, down 12% in just 24 hours, and hit a low. since the end of February.

Cryptocurrencies are proving to be a risky asset class like stocks and vulnerable to similar concerns – dragging the Dow, S&P 500 and Nasdaq lower.

“We still believe there is a risk of increased downside pressure on equities, which could usher in a deeper correction in bitcoin price,” said Joel Kruger, market strategist at LMAX Group. The next level of support for this cryptocurrency is at $28,800 – the lowest level since June 2021.

Skilling’s Kamerman also said: “Bitcoin is not immune to the risk of global inflation spreading across most other asset classes. We should therefore accept that the downtrend will continue.”

Mr. Hatfield of the InfraCap Equity Income ETF, thinks that Bitcoin could drop to as low as $20,000 by the end of the year.

However, “once the price drops to the $20,000 level, we believe the narrative will start to change and Bitcoin will be very well supported even if equities continue to fall, with the long-term fundamentals promising.” more promising for Bitcoin’s price increase,” said Kruger of LMAX Group.

For his part, Mr. Kamerman of the firm Skilling said he remains optimistic about the prospects of Bitcoin in the long-term. Many hedge funds and other large institutions are starting to invest in cryptocurrencies, and several global central banks are also starting to accept this asset class.