CEO Tim Cook said that Apple will actively consider the Prime Minister’s proposal to increase the number of domestic suppliers and increase the use rate of domestic services and goods in its products in coming time.

This information was shared by a representative of Apple on the occasion of Prime Minister Pham Minh Chinh’s visit to work with Apple Corporation on the afternoon of May 17.

According to Apple’s share, the group’s 31 partner factories in Vietnam currently have about 160,000 employees. These factories specialize in the production of electronic components such as electrical panels, cameras, screens, etc. for Apple products and complete product assembly.

It is known that Apple’s partners in Vietnam including Foxconn, Pegatron, Luxshare, etc. have invested heavily in Vietnam for production in recent years, in which they are concentrated in the northern provinces. 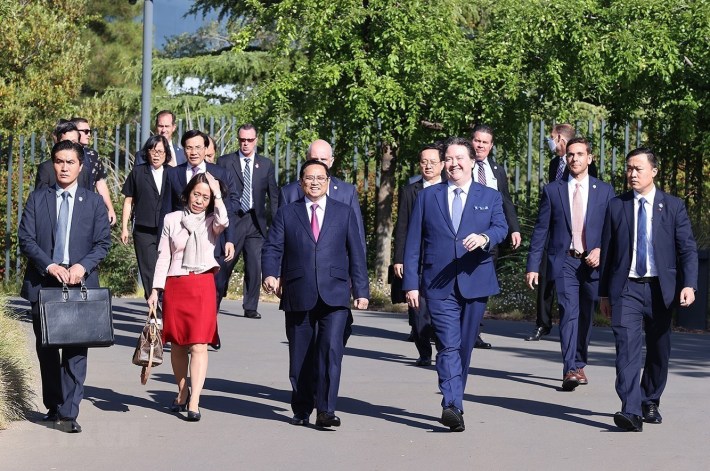 The Vietnamese government is committed to continuing to create a fair, transparent, and market-based business environment, creating maximum conditions for American businesses and investors to increase their operations in Vietnam, especially in an area of ​​both economic and strategic significance.

The Prime Minister assessed that Apple products have become very popular in the world, including Vietnam; Vietnamese people of all ages, especially in urban areas, are very fond of Apple technology products. With the global digital economy growing strongly, it is certain that Apple products will be more and more interested.

The Prime Minister expressed his delight at the fact that Vietnam is moving deeper into the global supply chain, including the assembly of some Apple devices. The Prime Minister proposed that Apple Corporation focuses on investing in developing business activities in Vietnam, bringing Apple products to a wide range of customer segments, and Vietnam will become one of Apple’s typical markets in the Asia region.

Mr. Tim Cook affirmed that he would actively consider the Prime Minister’s proposal on increasing the number of domestic suppliers and raising the rate of using domestic services and goods higher in Apple products in the near future. Apple wants the Vietnamese Government to continue to have preferential policies to encourage American high-tech enterprises to develop business and invest in Vietnam.