After 22 years of listing, how are the first two enterprises on the stock exchange today?

They used to have the same starting point with a fairly similar scale, but up to now, these two businesses have had separate turns and a large gap.

Vietnam’s stock market has undergone 22 years of establishment and development. Along with the growth of the market are SAM, REE, the first 2 stocks listed on Vietnam stock exchange. Having shared the same starting point with a fairly similar scale, up to now, SAM and REE have had separate turns and big gap.

In terms of scale, REE’s charter capital is 3,100 billion dong, while SAM’s chartered capital is 3,654 billion dong. On the SAM side, after 13 strong capital raising sessions, the charter capital of SAM has surpassed REE and increased 20 times compared to the time it was listed on the stock exchange. In the near future, SAM plans to continue to increase its capital to VND 3,800 billion through the issuance of nearly 15 million shares. 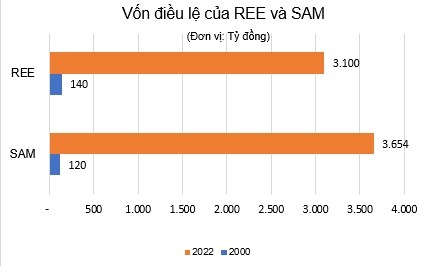 For REE, the charter capital of 3,100 billion dong has been maintained since 2016 until now. However, the company is also making a move to increase capital to more than 3,564 billion dong through the issuance of nearly 46.4 million shares to pay dividends in 2021. 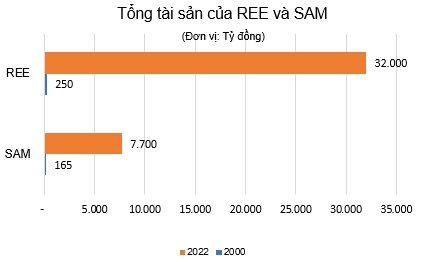 Despite the rapid increase in capital, in terms of total assets, SAM lags far behind REE. Over the past 22 years, SAM’s total assets increased from VND 165 billion to approximately VND 7,700 billion, while REE’s total assets outperformed by hitting more than VND 32,000 billion, a sharp increase from VND 250 billion at the new time. on the floor.

READ MORE:  Vietnam needs to be more selective when receiving FDI. Here’s why

SAM Holdings Joint Stock Company was formerly SACOM Investment and Development Joint Stock Company. SAM’s initial field of activity was manufacturing and distributing cables for the post and telecommunications industry. This is the main business segment bringing steady profit for SAM at that time.

However, the investment spread across many fields has not shown a clear effect. This is clearly shown in the business results of SAM without too many breakthroughs, although the capital scale has increased significantly.

Unlike SAM, REE Refrigeration Engineering has chosen its own path when focusing on renewable energy and clean energy. With a clear orientation, REE has become a formidable enterprise in three fields: energy, real estate and M&E. In particular, focusing on electricity and water infrastructure will help REE enjoy long-term advantages because these are essential industries in life.

In the field of office for lease and real estate, REE is operating office buildings for lease with a total area of ​​150,000m2 and will increase to 200,000m2 when E.Town6 officially comes into operation. REE Land is currently the developer of real estate projects of the group. At the same time, the company is still an M&E contractor, an EPC contractor for energy projects, and a distributor of Reetech and Fujitsu brand air conditioners.

READ MORE:  “Women in Trade for Inclusive and Sustainable Growth”- project to upgrade export capacity of women-led enterprises in Vietnam

In 2000, when newly listed, REE and SAM’s revenue reached VND 225 billion and VND 117 billion respectively. The period 2004 – 2007 was the period when SAM “surpassed” REE in terms of revenue. However, the wrong steps in business strategy made SAM’s business situation plummet, even in 2008 and 2011 there was a loss of approximately hundreds of billions of dong.

After nearly 10 years of strategic changes, SAM’s business is somewhat more stable than the previous period, although it has not really made a mark. In particular, SAM’s profit is not commensurate with revenue when it only fluctuates around the threshold of VND 100 billion. In particular, business cash flow has been continuously negative in the last 2 years (negative 545 billion dong in 2020 and negative 1,044 billion dong in 2021). 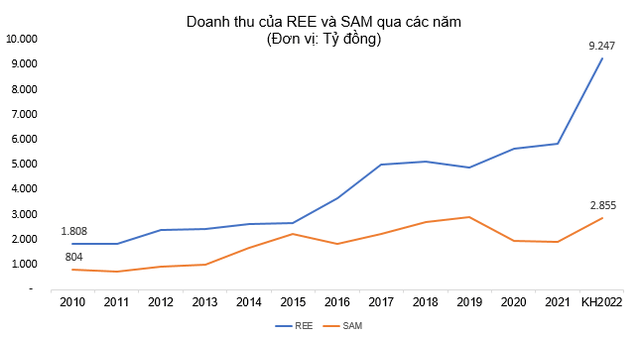 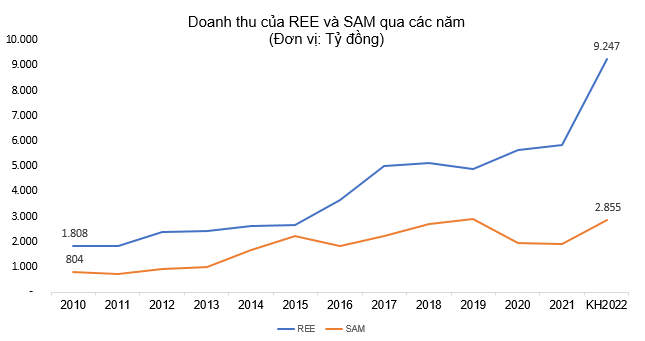 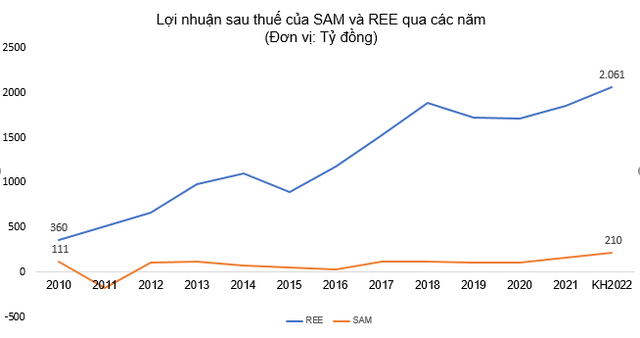 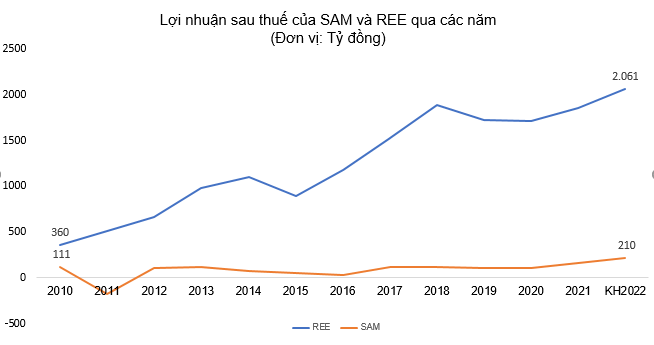 Agreed on poor business results, SAM’s stock price has in many periods been equal to “a cup of iced tea”. Along with the sublimation of the stock market in the past 2 years, this stock has returned to par, even skyrocketing to nearly 25,000 VND/share at the beginning of this year. However, currently SAM stock is only around 11,500 dong/share (closing session 25/7), equivalent to 4,200 billion dong of market capitalization.

Besides, REE is also one of the stocks with great attraction to foreign investors. With the frequent closed foreign room, foreign investors even have to accept to pay a higher cost than the market price on the floor to own this stock. In addition, this stock is also a familiar name in important index baskets such as VN-30 or VN Diamond.