A ‘peaceful transfer’ of power awaited as Taliban entering Kabul

Taliban fighters entered Kabul on Sunday and sought the unconditional surrender of the central government, officials said, as Afghans and foreigners alike raced for the exit, signaling the end of a 20-year Western experiment aimed at remaking Afghanistan.

The beleaguered Afghan government, meanwhile, hoped for an interim administration, but increasingly had few cards to play. Civilians fearing that the Taliban could reimpose the kind of brutal rule that all but eliminated women’s rights rushed to leave the country, lining up at cash machines to withdraw their life savings.

Helicopters buzzed overhead to evacuate personnel from the U.S. Embassy, while smoke rose near the compound as staff destroyed important documents. Several other Western missions also prepared to pull their people out.

In a stunning rout, the Taliban seized nearly all of Afghanistan in just over a week, despite the billions of dollars spent by the U.S. and NATO over nearly two decades to build up Afghan security forces. Just days earlier, an American military assessment estimated it would be a month before the capital would come under insurgent pressure.

Instead, the Taliban swiftly defeated, co-opted or sent Afghan security forces fleeing from wide swaths of the country, even though they had some air support from the U.S. military.

On Sunday, the insurgents entered the outskirts of Kabul but apparently remained outside of the city’s downtown. Sporadic gunfire echoed at times though the streets were largely quiet.

Taliban spokesman Suhail Shaheen told Qatar’s Al-Jazeera English satellite news channel that the insurgents are “awaiting a peaceful transfer of Kabul city.” He declined to offer specifics on any possible negotiations between his forces and the government.

But when pressed on what kind of agreement the Taliban wanted, Shaheen acknowledged that they were seeking an unconditional surrender by the central government.

Taliban negotiators were in Kabul on Sunday to discuss the transfer of power, said an Afghan official who spoke on condition of anonymity for fear of reprisals. It remained unclear when that transfer would take place and who among the Taliban was negotiating

The negotiators on the government side included former President Hamid Karzai and Abdullah Abdullah, the head of the Afghan National Reconciliation Council, an official said. Abdullah has been a vocal critic of President Ashraf Ghani, who long refused giving up power to get a deal with the Taliban.

The official, who spoke on condition of anonymity to discuss details of the closed-doors negotiations, described them as “tense.” Karzai himself appeared in a video posted online, his three young daughters around him, saying he remained in Kabul.

“We are trying to solve the issue of Afghanistan with the Taliban leadership peacefully,” he said, while the roar of a passing helicopter could be heard overhead.

President Ghani appeared increasingly isolated. Warlords he negotiated with just days earlier have surrendered to the Taliban or fled, leaving him without a military option. Negotiations in Doha, Qatar, the site of a Taliban office, have failed to stop the insurgents’ advance.

Still, acting Defense Minister Bismillah Khan sought to reassure the public that Kabul would remain “secure.” The insurgents also tried to calm residents of the capital, insisting their fighters wouldn’t enter people’s homes or interfere with businesses. They also said they’d offer an “amnesty” to those who worked with the Afghan government or foreign forces.

“No one’s life, property and dignity will be harmed and the lives of the citizens of Kabul will not be at risk,” the insurgents said in a statement.

But there have been reports of revenge killings and other brutal tactics in areas of the country the Taliban have seized in recent days.

And on Sunday, panic set in as many rushed to leave the country through the Kabul airport, the last route out of the country as the Taliban now hold every border crossing.

One Afghan university student described feeling betrayed as she watched the evacuation of the U.S. Embassy.

“You failed the younger generation of Afghanistan,” said Aisha Khurram, 22, who is now unsure of whether she’ll be able to graduate in two months’ time. “A generation … raised in the modern Afghanistan were hoping to build the country with their own hands. They put blood, efforts and sweat into whatever we had right now.”

Rapid shuttle flights of helicopters near the U.S. Embassy began Sunday, a few hours after the militants seized the nearby city of Jalalabad — which had been the last major city besides the capital not in Taliban hands. 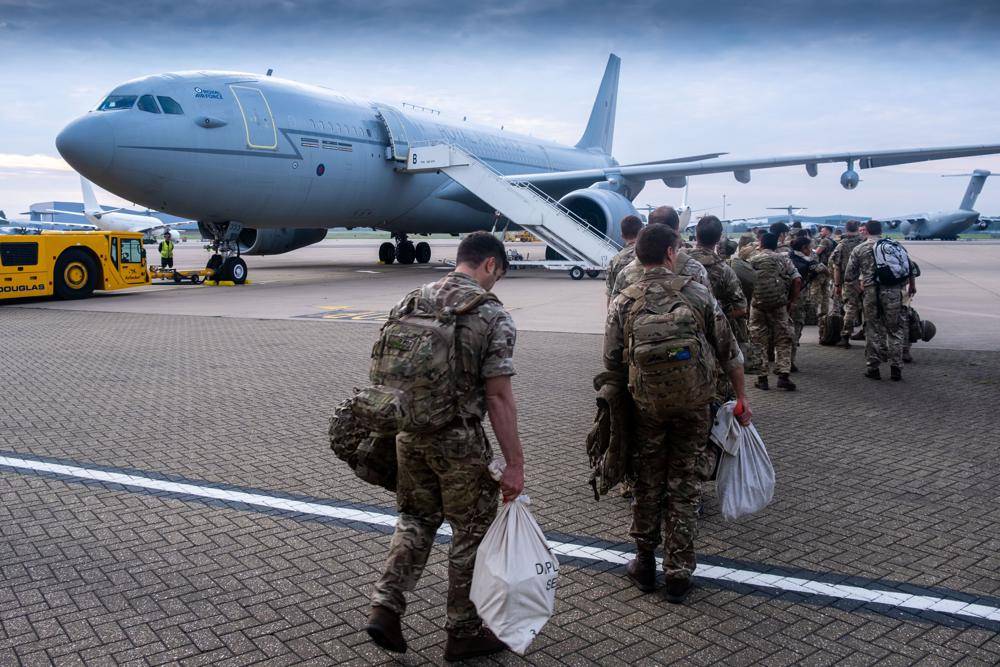 Members of Joint Forces Headquarters get prepared to deploy to Afghanistan to assist in the draw down from the area in this handout photo taken on Friday Aug. 13, 2021 and issued by the Ministry of Defence (MoD). With security rapidly deteriorating in Afghanistan, the United States planned to send in 3,000 troops to help evacuate some personnel from the U.S. Embassy in Kabul. Britain and Canada are also sending forces to aid their evacuations. (LPhot Ben Shread/MoD/Crown Copyright via AP)

The U.S. decided a few days ago to send in thousands of troops to help evacuate some personnel, and two officials said Sunday that American diplomats were being moved from the embassy to the airport. Military helicopters shuttled between the embassy compound and the airport, where a core presence will remain for as long as possible given security conditions.

The officials were not authorized to discuss diplomatic movements and spoke on condition of anonymity.

Meanwhile, wisps of smoke could be seen near the embassy’s roof as diplomats urgently destroyed sensitive documents, according to two American military officials who spoke on condition of anonymity because they were not authorized to discuss the situation. The smoke grew heavier over time in the area, home to other nation’s embassies as well.

Speaking to CNN on Sunday morning, U.S. Secretary of State Antony Blinken tried to push back against any comparison between the Afghan withdrawal and the one that came after the Vietnam War, saying: “This is not Saigon.” However, he acknowledged the “hollowness” of the Afghan security forces.

“From the perspective of our strategic competitors around the world, there’s nothing they would like more than see us in Afghanistan for another five, 10, 20 years,” he said. “It’s simply not in the national interest.”

NATO, meanwhile, said it was “helping to maintain operations at Kabul airport to keep Afghanistan connected with the world.”

Low-cost carrier FlyDubai said it would temporarily suspend flights to Kabul. It turned around a flight to the capital Sunday, as did Emirates. Emirates said an “unforeseen temporary closure of the runway” stopped it from landing.

Earlier in the day, militants posted photos online showing them in the governor’s office in Jalalabad, the capital of Nangarhar province.

Abrarullah Murad, a lawmaker from the province told The Associated Press that the insurgents seized the city after elders negotiated the fall of the government there.

The insurgents also took the land border at Torkham, the last not in their control, on Sunday. Pakistan’s Interior Minister Sheikh Rashid Ahmed told local broadcaster Geo TV that Pakistan halted cross-border traffic there after the militants seized it.

Later, Afghan forces at Bagram air base, home to a prison housing 5,000 inmates, surrendered to the Taliban, according to Bagram district chief Darwaish Raufi. The prison at the former U.S. base held both Taliban and Islamic State group fighters.