Nguyen Ngoc Manh could not believe he saved a little girl in free fall from a Hanoi apartment complex Sunday. Many called him a hero, though he dislikes the moniker.

Nguyen Ngoc Manh and his wife experienced a sleepless Sunday night after Manh saved a two-year-old girl from tumbling off an apartment balcony earlier that morning.

Even now, Manh, 31, finds it hard to fight back the tremors rumbling along his arms. Withstanding the pain the entire night, he resorted to painkillers Monday morning.

In his home near Nhat Tan Bridge of Dong Anh District, he replayed the clip capturing the moment he flung himself out to catch the girl in free fall, unable to explain his miraculous reaction.

“Everything happened within a minute. I didn’t understand how I could scale the roof that quickly. I couldn’t believe I saved the girl’s life,” he maintained.

At around 5:30 p.m. Sunday, locals near an apartment complex on Nguyen Huy Tuong Street saw a little girl climbing over a 12th-floor balcony railing. Manh, a shipper, was sitting in his car parked on the complex grounds when he heard the screams for help and the sound of a child crying.

“I looked up and saw the girl. I couldn’t think of anything, so I got out of the car and climbed onto a roof to be on the girl’s trajectory. I caught her in my arms just in time,” he recalled. 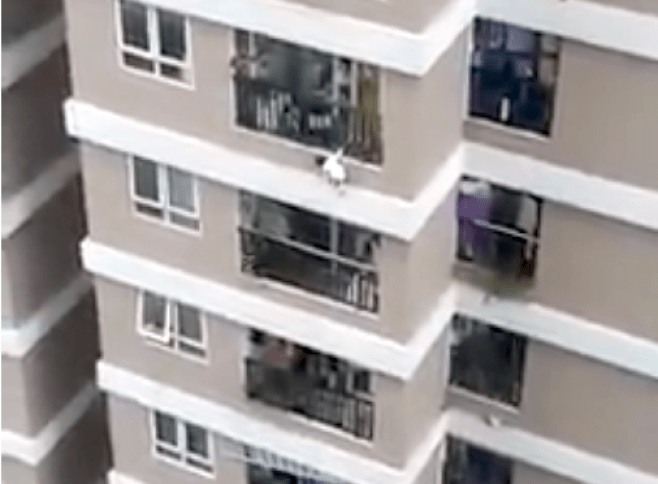 A video still showing a little girl hanging from a Hanoi apartment balcony, seconds before she fell.

As the girl as bleeding from her mouth, Manh quickly turned her over to a security guard so she could be hospitalized, realizing later he has sprained his arm muscles.

“I didn’t think about it much back then, but now I’m happy for doing something meaningful. After saving the girl, I left without leaving a phone number, though the girl’s family managed to contact me anyway to inform me of the girl’s health status,” he said.

On Monday morning, doctors at National Children’s Hospital, where the girl was admitted, said she dislocated her hip after the incident, but suffered no other anomalies. She is now in a cast and under monitor prior to doctors mapping out a treatment regime, said Le Ngoc Duy, a doctor at the hospital.

Barely a day has passed since Manh’s heroic act, yet his life has forever changed.

“It’s not just changed: my life has turned upside down. Normally my Facebook posts draw only a few dozen responses, now I get tens of thousands,” Manh said.

Though many netizens have called him a hero on social media, Manh said he disliked the moniker, believing anyone would have done the same given the circumstances.

“I don’t see myself as a hero. I just want to do good,” he commented.

Manh’s phone has been abuzz with well-wishers wanting to send him gifts, all of which he has declined.

“Some have sent me money via my phone number. This disorientates me. I don’t want to receive any money I haven’t earned by myself,” he said.

Manh said he would visit the girl once she is discharged from hospital, and that he would adopt her if needed.

“I want to have as many children as possible,” the father of two declared.

As a new week began, his work day commenced like any other, with Manh hoping his life could soon resume normality so he could continue caring for his family.