Automobile consumption in Vietnam may hit an important sales milestone for the first time, possibly becoming one of the region’s major auto markets.

No longer a forecast, the Vietnamese auto market may be about to reach a record milestone in sales after 2022 ends.

According to statistics from the Vietnam Automobile Manufacturers Association (VAMA), sales of the manufacturers under the association have reached 369,334 vehicles after 11 months. Including a number of manufacturers that have announced sales, including TC Motor with 72,037 vehicles under the Hyundai brand and VinFast with 18,052 vehicles, the total consumption of the Vietnamese auto market has reached 459,323 vehicles. Thus, just need to consume about 40,000 more cars in December, the Vietnamese auto market will reach the sales milestone of 500,000 vehicles. This is a number that is not difficult to achieve if based on the parameters of VAMA, Hyundai and VinFast when on average, the Vietnamese market has consumed more than 41,000 cars per month in the past 11 months. Meanwhile, this December, many manufacturers are also promoting discount and promotional campaigns to run year-end sales, serving the Tet season.

It should also be remembered that the number of more than 459,000 cars sold does not include the sales of some large companies that do not disclose information such as Nissan, Volkswagen, Subaru or some luxury car brands such as Mercedes-Benz, Audi, Volvo or Jaguar Land Rover.

In the last 3 years, the sales of the Vietnamese auto market reached approximately 410,000 vehicles while in the previous years, the consumption was only over 200,000-300,000 vehicles/year. 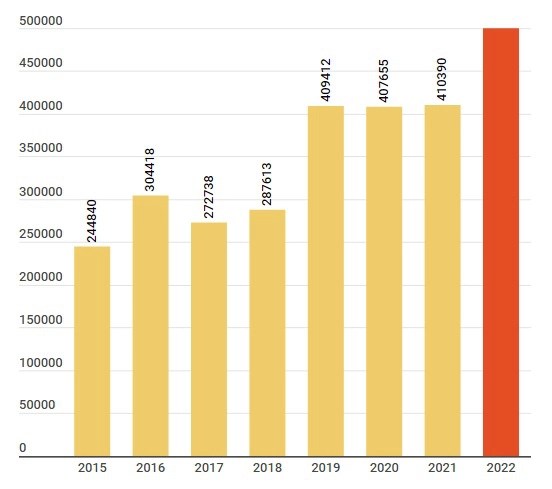 Sales of automobiles in Vietnam from 2015 to present. Data: VAMA, TC Motor, VinFast.

The auto market reaching the sales milestone of 500,000 vehicles has been predicted because after 2 years of pent-up due to the pandemic, it is understandable when the purchasing power of cars increases sharply when the travel demand of the people is high. Besides, when the economy goes up, it is inevitable that people look to safer and more modern means such as cars.

Some forecasts even suggest that this year’s purchasing power of 500,000 vehicles/year has not yet fully reflected the market’s demand when severe supply chain disruptions this year have affected the business of many large firms. There are periods when many hot car models are constantly out of stock, causing users to wait or pay the difference if they want to receive the car soon.

Vietnam is the 4th largest car producer in Southeast Asia

According to the General Statistics Office, the number of cars manufactured and assembled in Vietnam after the first 10 months of 2022 reached 362,500 vehicles, up 16.4% over the same period in 2021. Meanwhile, according to data from Southeast Asian Automobile Association (AAF), Thailand is currently the largest car producer in the region with 1.599 million vehicles after the first 10 months of the year, followed by Indonesia with 1,201 million vehicles and Malaysia with 567,752 vehicles. These countries recorded 17.1%, 34.5% and 53.7% growth, respectively, over the same period in 2021. 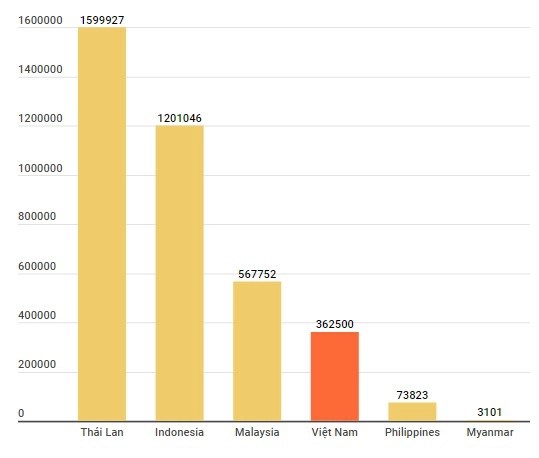 Thailand and Indonesia have long been considered the auto manufacturing hubs in Asia. This is also the place where the car models are imported to Vietnam the most, next to China. Meanwhile, Malaysia is famous for domestically produced and consumed models from the Proton or Perodua brands.

With the production level still far behind competitors, experts predict that it will take a while for Vietnam to break through compared to the remaining production centers. In the short term, Malaysia is the target for the Vietnamese auto industry to overcome, especially when Vietnam has its own auto brand that aims to produce large quantities of electric vehicles for the domestic market and export. Export to the US and Europe is VinFast.

In addition, some new car manufacturers such as Skoda or Chery are also planning to associate with domestic partners to assemble cars in Vietnam in the next 1-2 years. Along with that, TC Motor and Hyundai have also inaugurated a new factory in Ninh Binh with a capacity of up to 180,000 vehicles per year.